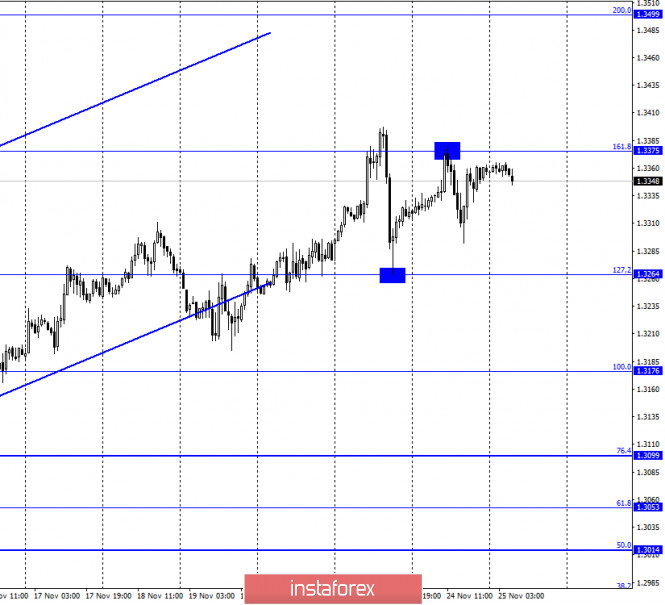 GBP/USD. November 25. COT report. British industrialists and the Bank of England are calling on the government to strike

According to the hourly chart, the quotes of the GBP/USD pair performed yesterday a rebound from the corrective level of 127.2% (1.3264), a reversal in favor of the British, a rebound from the corrective level of 161.8% (1.3375), and a reversal in favor of the US currency. Thus, now the quotes may fall slightly in the direction of the level of 1.3264. At the same time, fixing the rate above the Fibo level of 161.8% will increase the chances of continuing growth towards the next corrective level of 200.0% (1.3499). Oddly enough, but the British continue the growth process if you take a long-term plan. And this is even though the trade deal with the European Union is still not agreed upon. At the same time, British businesses continue to sound the alarm and beg the government of Boris Johnson to agree to a trade agreement with the European Union. For example, the UK car industry could lose around 55 billion pounds due to the lack of a trade agreement, and car production could fall to less than 1 million a year. Let me remind you that more than 50% of all goods and services produced are sent from the UK to the EU. If prices rise sharply for these goods and services, consumption in the EU will decrease. And prices will rise if a trade agreement is not reached, because in this case trade will be carried out according to WTO rules. Andrew Bailey, the Governor of the Bank of England, also calls for avoiding a break in relations without an agreement. He said the other day that the loss of the British economy will be much greater from the lack of a deal than from the coronavirus pandemic. 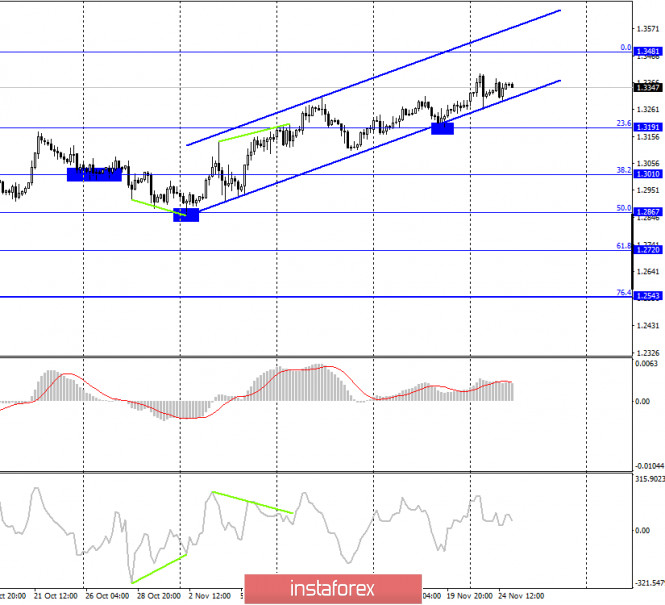 On the 4-hour chart, the GBP/USD pair generally continues to grow in the direction of the corrective level of 0.0% (1.3481). The upward trend corridor shows the current mood of traders – “bullish”. Fixing the pair’s exchange rate under this corridor will work in favor of the US currency and the beginning of a fall in quotes towards the levels of 1.3191 and 1.3010. 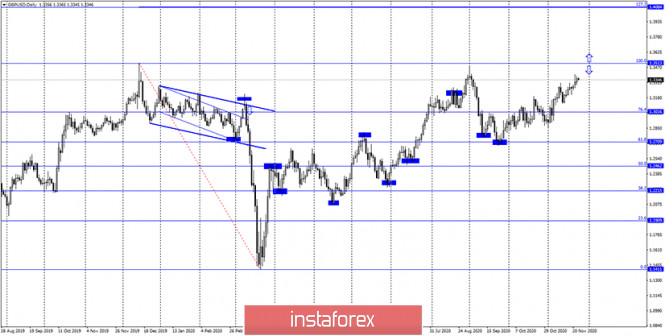 On the daily chart, the pair’s quotes continue to grow in the direction of the corrective level of 100.0% (1.3513). However, when trading a pair, I recommend paying more attention to the lower charts. They are now more informative. 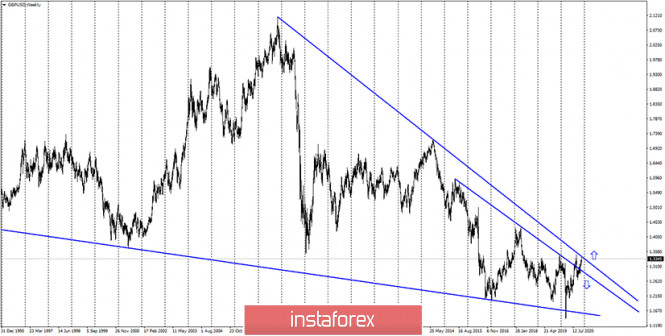 On the weekly chart, the pound/dollar pair completed a new close above the lower downward trend line, although a false breakout of this line followed earlier. In recent weeks, the pair has made new attempts to gain a foothold over both trend lines.

There were no major economic reports or any other events in the UK or America on Tuesday. There was practically no information background.

US – number of primary and repeated applications for unemployment benefits (13:30 GMT).

On November 25, several quite important economic reports will be released in America, so the information background will be strong for the pair today. 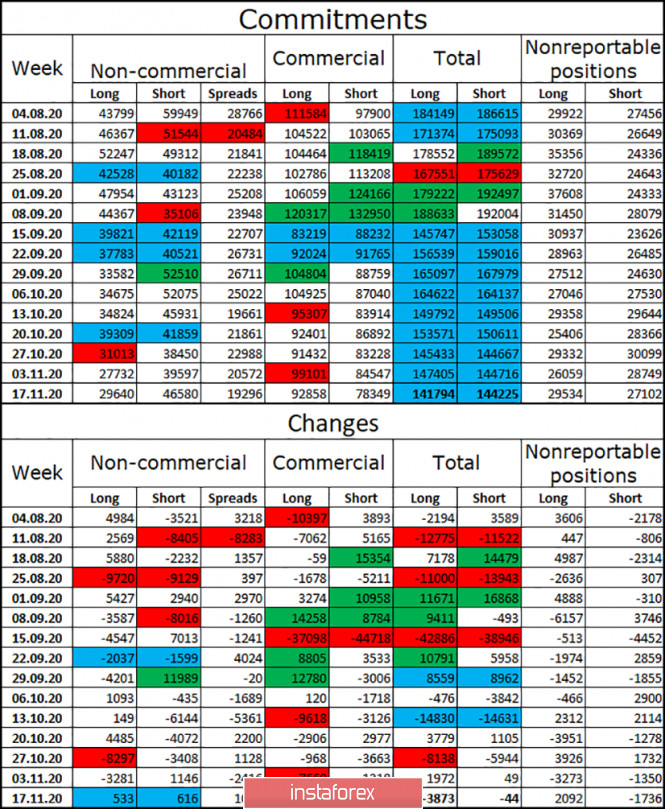 The last two COT reports showed a fairly sharp increase in the number of open short contracts for the “Non-commercial” category of traders. This suggests that speculators continue to believe in the fall of the British dollar in the very near future. Over the past three weeks, speculators have been building up short contracts and closing long ones. In general, major players are more afraid of opening new contracts, so their total number is falling. This is seen in the table above. Thus, conclusion number one: major players are afraid of the uncertainty associated with the trade deal and the British economy, so they do not want to trade the pound more actively. Conclusion number two: speculators believe more in the fall of the pound than in its growth.

Today, I recommend selling the GBP/USD pair with targets of 1.3264 and 1.3191 if the closing is performed under the ascending corridor on the 4-hour chart. I recommend that you be careful with the pair’s purchases now, as the quotes have consolidated under the trend corridor on the hourly chart, the COT report shows the faith of major players in the fall of the pound, and there is still no trade deal between London and Brussels.

GBP/USD: plan for the European session on December 1. COT reports....

13 of the Largest Shopping Malls Around the World

Forecast and trading signals for EUR/USD on January 7. COT report....

Technical recommendations for EUR/USD and GBP/USD on January 14

Overview of the GBP/USD pair. December 25. The free trade agreement...