GBP/USD: plan for the American session on August 19

In the first half of the day, several signals were formed to sell the British pound, which brought a fairly good profit of about 50 points of movement within the day. Closing long positions on the pound occurred after the lack of reaction from major players to good data on the growth of inflation in the UK. If you look at the 5-minute chart, you will see how the bears form a false breakout in the resistance area of 1.3269 and start pushing the pair into the support area of 1.3212. But even if you did not manage to enter on this signal, an additional entry point was formed in short positions after the pair returned to this range again. At the moment, the bulls are trying to protect the level of 1.3212, but only the formation of a false breakout on it and a return to this range with its top-down test in the second half of the day will be a signal to open long positions. The goal will be to return to the maximum of 1.3260, as it is unlikely to break above this level. In the scenario of a further decline in the pound, it is best to postpone long positions until the update of the minimum of 1.3173, the test of which may take place after the publication of the Federal Reserve minutes.

The bears did a great job in the morning and are now trying to gain a foothold below the level of 1.3212. While trading will be conducted below this range, most likely the pressure on the pound will continue, and an unsuccessful attempt to return to this range followed by another decline in the GBP/USD at 1.3212 in the second half of the day will be an excellent signal to build up short positions in the expectation of returning the pound to the area of the minimum of 1.3173, where I recommend fixing the profits. Too good protocols of the Federal Reserve System may lead to further decline of the pair to the support area of 1.3126. In the scenario of buyers returning support to 1.3212 in the second half of the day, and this option seems more realistic, it is best to sell the pound again on a rebound from the resistance of 1.3260 in the calculation of a correction of 20-30 points within the day. 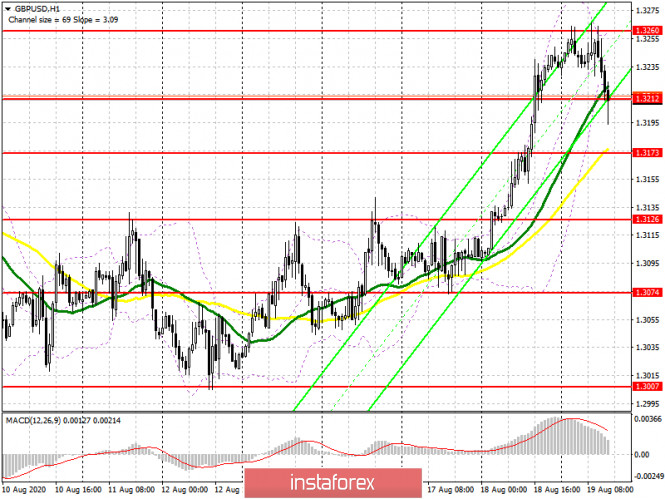 Trading is conducted above the 30 and 50 daily averages, which indicates the development of a bull market.

If the pound rises in the second half of the day, the upper limit of the indicator around 1.3260 will act as a resistance.

New To Crypto? Prepare For The Next Bitcoin Boom With This...

U.S. Adds More Than 800,000 Jobs, But Unemployment Rises For Minorities

Sad news for the Queen as she is forced to miss...

Analysis for EUR/USD on August 19. Politics prevents the dollar from...