In my morning forecast, I paid attention to the sale of the pound when forming a false breakout in the resistance area of 1.2528. If you look at the 5-minute chart, you will see how there were several tests of this range, and the third update to the level of 1.2528, after the release of data on the US labor market, and a surge in volume led to a more powerful movement of the pound down. At the moment, it is time for the bulls to think about protecting the support of 1.2451, to which the pair is now declining and where it is quite timely to pass the moving averages that play on the side of the bulls. If there is no activity at this level, it is best to postpone the opening of long positions immediately for a rebound from the minimum of 1.2386 in the expectation of a correction of 30-40 points within the day. An equally important task for the bulls is to break through and consolidate above the resistance of 1.2528, which will lead to further growth of GBP/USD to the highs of 1.2607 and 1.2676, where I recommend fixing the profits.

Sellers of the pound achieved their goal and formed a false breakout in the resistance area of 1.2528, from where I recommended opening short positions. The key goal of the bears for the second half of the day is to return the pair to the support level of 1.2451, since only a consolidation below this range will be a signal to open short positions in the hope of resuming the downward correction to the low of 1.2386, where I recommend fixing the profits. The longer-term goal will be the area of 1.2221. In the scenario of growth of GBP/USD in US trading, it is best to postpone sales until the next formation of a false breakout at the level of 1.2528. However, you can safely open short positions immediately for a rebound after testing the maximum of 1.2607 in the expectation of a correction of 30-40 points within the day. 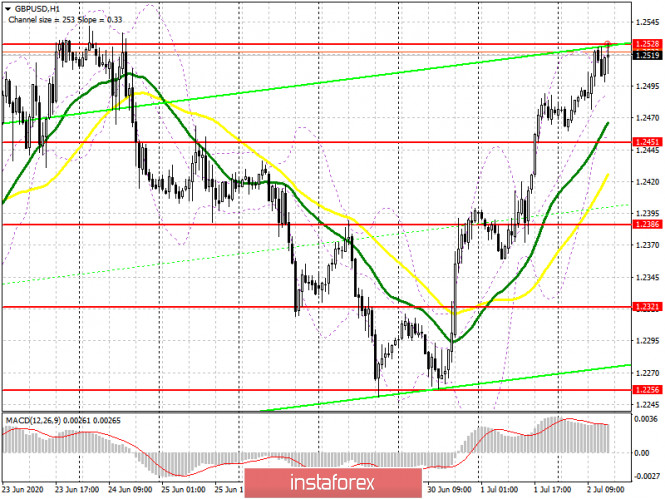 Trading is conducted above the 30 and 50 daily averages, which leaves a chance of continuing the upward correction of the pound.

A break in the lower border of the indicator in the area of 1.2451 should increase pressure on the British pound. Breaking the upper limit of the indicator around 1.2520 will lead to a new growth of GBP/USD.

You can virtually join Stonehenge’s summer solstice celebration for free—for the...

EU leaders added optimism, US dollar is weakening in all directions;...

The prettiest birthstone jewelry for Mother’s Day gifts, starting at $24

EUR/USD: plan for the European session on August 3. Bears will...