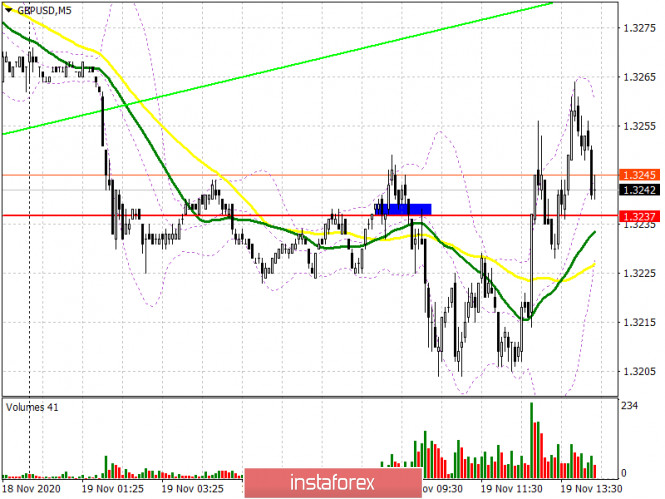 GBP/USD: plan for the American session on November 19 (analysis of morning deals)

In my morning forecast, I paid attention to the level of 1.3237 and recommended to act from it based on the situation. Let’s look at the 5-minute chart and see what happened. Initially, the bulls tried to take the area of 1.3237 and even broke above this range by testing it from top to bottom, which led to the formation of a buy signal, which immediately led to a loss, as the bears quickly regained control of this level. Then, after a confident consolidation below 1.3237, a reverse test of the area of 1.3237 took place from the bottom up, which led to the formation of a sell signal for the pound. The movement from this level was more than 30 points, however, it was not possible to achieve the formation of a larger downward trend.

If you look at the hourly chart, you will see that buyers managed to return the pound to the level of 1.3237 again, keeping the initiative on their side. Only if the bulls hold 1.3237, or achieve the formation of a false breakout, I recommend opening long positions in the continuation of the upward trend. This may happen immediately after the release of data on the US labor market, as the number of initial applications for unemployment benefits may jump sharply amid the growth of the coronavirus epidemic in the United States. If the report turns out to be worse than economists’ forecasts, the bulls will continue to buy the pound. In this case, the nearest target for buyers will be this month’s maximum of 1.3310. Only a break and consolidation above this range forms a new wave of growth of the pound with an exit to the area of 1.3378 and 1.3467, where I recommend fixing the profits. In the scenario of good data on the US economy and the return of GBP/USD to the level of 1.3237, it is best to postpone long positions until the minimum of 1.3168 is updated or buy the pair immediately for a rebound from the larger area of 1.3106, which is a kind of lower border of the wide side channel 1.3106-1.3310 in which the pound is all this month.

The bears are still fighting to regain control of the level of 1.3237, which they managed to miss in the first half of the day. Particular attention is focused on the Brexit news, as it will set the tone of the market at the end of this week. The initial task is to return GBP/USD to the level of 1.3237 and test it from the bottom up, which forms a fairly good entry point into short positions, which will be able to push the pound to a minimum of 1.3168, where I recommend fixing the profits. Only a breakout of 1.3168 with consolidation under this range will give sellers of the pound more confidence, which will open a direct road to the lows of 1.3106 and 1.3034. In the scenario of a lack of activity among sellers and poor data on the US economy, it is best to postpone short positions until the maximum of 1.3310 is updated, provided that a false breakout is formed there. I recommend selling GBP/USD immediately for a rebound from the maximum of 1.3378, based on a correction of 20-30 points within the day. 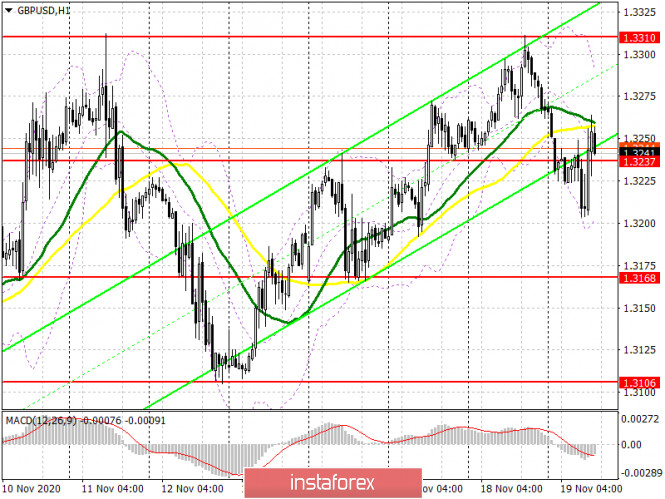 In COT reports (Commitment of Traders) for November 10, there was a minimal increase in long positions and a sharp influx of short positions. Non-commercial long positions grew from 27,701 to 27,872. At the same time, short non-commercial positions increased from the level of 38,928 up to the level of 45,567. As a result, the negative non-commercial net position was -17,695, compared to -11,227 a week earlier, which indicates that sellers of the British pound remain in control and have an advantage in the current situation.

Trading is conducted around 30 and 50 daily averages, which indicates the sideways nature of the market.

If the pound rises, the upper limit of the indicator around 1.3300 will act as a resistance.

Disaster Preparedness: The Math Behind How & Why You Should Invest

GBP/USD: plan for the European session on January 25. COT reports...