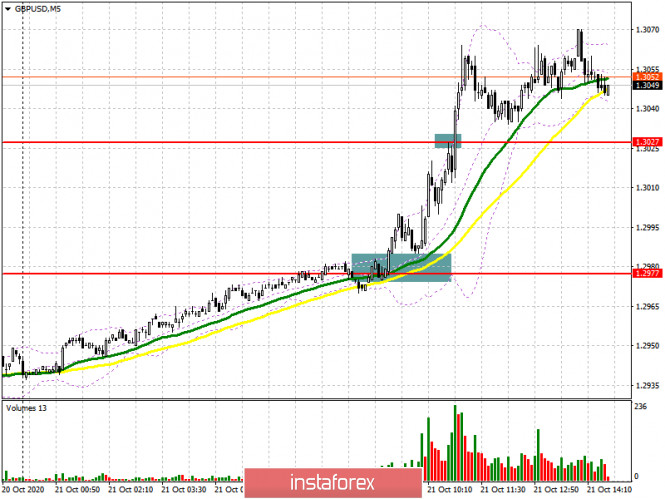 GBP/USD: plan for the American session on October 21 (analysis of morning deals)

In my morning forecast, I paid attention to a fairly high probability of a breakout and consolidation above the resistance of 1.2977, which should lead to a new wave of growth of the British pound. This is what happened. Let’s take a look at the 5-minute chart. For the sake of justice, I should say right away that I personally missed the moment of entry, as I was probably waiting for a test from the backside of the top-down level of 1.2977, to which we fell just a couple of points short, after which the market continued to grow. Sales on the rebound from the area of 1.3027 did not bring much profit, as the correction was not deep enough and amounted to about 15 points.

Now the bulls face a new task, namely to break and consolidate above the resistance of 1.3080, which will be another signal to open long positions in the continuation of the growth of the British pound in the area of the maximum of 1.3154, which will not be so easy to do. If there is no bull activity in this range, it is best not to rush to buy but to wait for a downward correction to the support area of 1.3031, where only the formation of a false breakout will return new buyers to the market. If the GBP/USD starts to decline in the second half of the day, and there is no special support at 1.3031, it is best to buy the pound only for a rebound from the morning support of 1.2977, where the moving averages are currently held.

To open short positions on GBP/USD, you need to:

Sellers are clearly not happy with what is happening in the market and are not in a hurry to return to it even when updating fairly large levels. Now the emphasis is placed on the protection of the resistance of 1.3080 and only the formation of a false breakout on it will be a signal to open short positions on the pound with the aim of a downward correction to the support of 1.3031. However, it will be possible to talk about a full-fledged downward correction only after the return and consolidation below the level of 1.3031, which will push the pound to a minimum of 1.2977, where I recommend fixing the profits. Given that important fundamental statistics are not expected to be released in the second half of the day, the pound has every chance to continue growing above the resistance of 1.3080. In this scenario, you should not rush to sell. It is best to wait for the maximum update of 1.3154 and sell the pound from there immediately on the rebound, counting on correction of 30-40 points within the day. 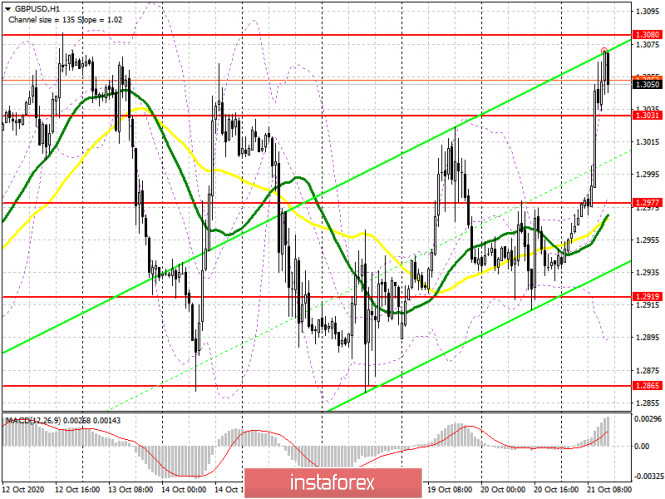 Trading is above 30 and 50 daily averages, which indicates that the pound is still bullish.

If the pair declines, the average border of the indicator in the area of 1.2980 will provide support.

EUR/USD: plan for the American session on September 9

Overview of the GBP/USD pair. October 7. The ship “Great Britain”...

Technical Analysis of EUR/USD for October 7, 2020

GBP/USD: plan for the European session on November 18. COT reports....