The speech of British Prime Minister Boris Johnson and his proposed bailout plan worth five billion pounds, as well as the gradual demand for risk after good fundamental statistics on the state of the US economy, supported the pound, which broke through to new highs, continuing the upward correction in the pair with the US dollar. If you look at the 5-minute chart, you will see how yesterday two signals were formed to buy the pound at once. Let’s look at them in more detail. In yesterday’s review for the second half of the day, I paid attention to strengthening the pound above the support of 1.2386, which was the first signal to buy. The sharp growth of GBP/USD, which took place in the second half of the day, led to a breakout and consolidation above the resistance of 1.2451. Then the top-down test of this level also formed a good entry point into purchases. At the moment, while trading is conducted above the area of 1.2451, we can expect the pound to continue growing to the high of 1.2528, consolidating above which will necessarily lead the pair to a new resistance area of 1.2607, where I recommend taking profits. In the scenario of a decline in GBP/USD in the first half of the day, forming a false breakout at the level of 1.2451 will be a signal to open long positions. If bulls are not active in this range, it is best to postpone purchases until the larger area at 1.2386 is updated, which is where all the growth occurred yesterday. Moving averages also pass at this level, which will be another incentive for traders. Let me remind you that the Commitment of Traders (COT) report for June 23 recorded another increase in short positions, which no longer reflects the current situation on the market. The new report will not be available until next Monday. There was an increase in short non-commercial positions from the level of 45,376 to the level of 48,170 during the week. Long non-commercial positions rose from the level of 29,379 to the level of 29,654 during this time. As a result, the non-commercial net position increased its negative value to -18,516, against -15,998, which indicates that pressure in the market remains after the bulls’ unsuccessful attempt to reverse the downward trend.

Sellers of the pound tried to reverse the upward momentum at the beginning of the US session, but nothing good came of it, which caused the pound to grow once again. The bears also failed to protect the level of 1.2451, which needs to be returned to the pair today in the morning. Consolidating below this range will be a signal to open short positions while expecting the downward correction to resume to the area of a low of 1.2386, where I recommend taking profits. In the scenario of further growth of GBP/USD, it is best to postpone sales until a false breakout is formed at the level of 1.2528. But you can safely open short positions immediately for a rebound after testing the high of 1.2607, which can take place after the release of good fundamental data on the US labor market. 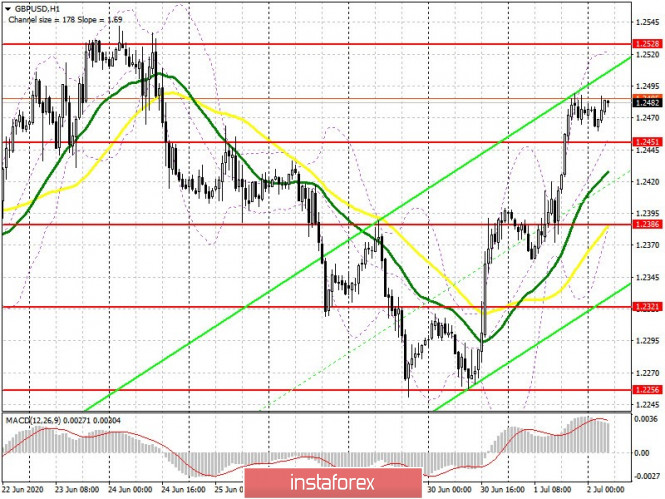 Trading is conducted above 30 and 50 moving averages, which indicates further growth of the pound and the formation of a new trend.

Note: the period and prices of moving averages are considered by the author on the hourly chart (H1) and differ from the general definition of the classic daily moving averages on the daily chart (D1).

Fractal analysis of the main currency pairs for June 26

EUR/USD. Preview of the week: decision of the German court, Nonfarm...

Trading plan for EUR/USD on August 5, 2020. Coronavirus and important...

GBP/USD: plan for the European session on August 7 (analysis of...