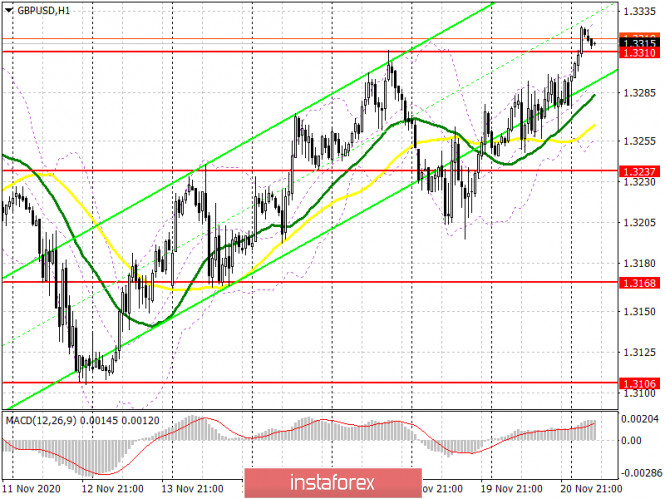 GBP/USD: plan for the European session on November 23. COT reports. Pound making its way up

We didn’t wait for signals to enter the market last Friday, since trading was carried out in a narrow horizontal channel. There were no guidelines for entering the market due to the fact that not a single nearest level was tested throughout the day. The pound grew in today’s Asian session amid rumors that a compromise was found on a number of important issues between the UK and the EU, which did not allow signing a trade agreement.

The bulls managed to take the 1.3310 level, and now their main task for the first half of the day is to protect this range. Falling to this level and a false breakout there will be a signal to open long positions in order to continue the upward trend while also hoping that the EU and the UK will come to an agreement. In this case, the nearest target for buyers will be resistance at 1.3378, where I recommend taking profit. The next target will be the high of 1.3467. Today’s benchmark will be the data on PMI indices for the services and manufacturing sectors in the UK. In case we receive bad reports, the pair could fall below the 1.3310 level. In this case, there is no need to rush in opening long positions. It is best to wait until the 1.3237 support has been updated and buy the pound there, counting on a rebound of 20-30 points within the day. A larger level for opening long positions is seen around 1.3168.

Bears need to regain control of the 1.3310 level. The easiest way to do this is after receiving weak data on the UK services sector. The decline in the PMI index is worse than expected and the initial value is likely to push GBP/USD under the 1.3310 level. Testing it from the bottom up forms a good signal to open short positions with the main goal of falling to support 1.3237, where I recommend taking profits. A more distant level will be the low of 1.3168. If the pound is in demand in the afternoon, then there is no need to rush to sell. I recommend waiting until a new high at 1.3378 has been tested and sell the pound there immediately on a rebound, counting on a correction of 20-25 points within the day. If bears are not active in this range, you can hold back from selling until the larger high of 1.3467 is renewed. And although the pound is growing on rumors that a number of compromises have been reached, the main problem with fishing has not been resolved. Therefore, at any moment the pair may begin to fall if it becomes clear that none of the parties is going to make concessions.

The Commitment of Traders (COT) report for November 10 showed a slight increase in long positions and a sharp inflow of short positions. Long non-commercial positions rose from 27,701 to 27,872. At the same time, short non-commercial positions increased from 38,928 to 45,567. As a result, the negative non-commercial net position was -17,695, against -11,227 weeks earlier, which indicates that the sellers of the British pound retains control and also shows their minimal advantage in the current situation.

Trading is carried out above 30 and 50 moving averages, which indicates the likelihood of the pound’s succeeding growth.

In case the pair falls, support will be provided by the lower border of the indicator at 1.3245.

Technical analysis of AUD/USD for September 15, 2020

GBP/USD: plan for the American session on December 16 (analysis of...

Future of Volunteering from the Volunteer Canada Perspective

Rapper and Social Media Influence Brax Passes Away At 21