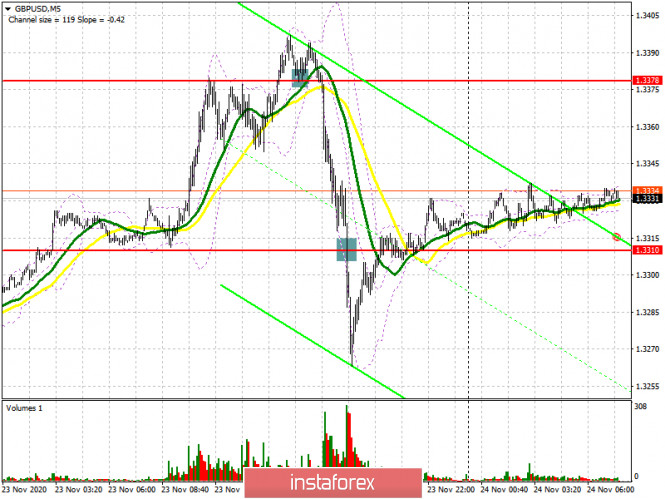 An excellent signal to buy the pound appeared yesterday afternoon after support at 1.3378 was updated, but it was not realized. Let’s figure it out. If you look at the 5-minute chart and remember yesterday’s forecast, you will see how the bulls went beyond the 1.3378 level, and testing it from top to bottom produced an excellent entry point into long positions in order to sustain the upward trend. However, having gone only a dozen points up, the demand for the pound decreased, and the data on the US economy caused the pair to sharply fall, since it turned out to be much better than economists’ forecasts. The breakout of the 1.3310 level without any hope of a rebound from this range did not leave the bulls a single chance.

But before we analyze the pound’s technical picture and run to buy it, let’s look at what happened in the futures market last week. Lack of clarity on the trade deal, along with the lockdown of the British economy in November, clearly does not add optimism and confidence to buyers of the pound. And if the media say that the deal is about to be concluded, the data from the futures market speaks of something completely different. The growth of the negative delta continues for the fourth consecutive week, and long positions do not change in any way, which cannot be said about the growth of short ones. The Commitment of Traders (COT) reports for November 17 saw a reduction in long positions and a sharp inflow of short positions. Long non-commercial positions declined from 27,872 to 27,454. At the same time, short non-commercial positions increased from 45,567 to 47,200. As a result, the negative non-commercial net position was -19,746 against -17,695 a week earlier, which indicates that the sellers of the British pound retains control and also shows their slight advantage in the current situation.

As for the technical picture, pound buyers should protect support at 1.3314. You can expect the pair to recover until trading is carried out above this range. Forming a false breakout in the 1.3314 area will be another signal to open long positions in order to return to yesterday’s high at 1.3392, which is where I recommend taking profits. We are unlikely to overcome this range without good news on the trade deal. In case the pair settles above 1.3392, you can build up long positions with the target of 1.3467 and 1.3523. In case the pound is under pressure again and it falls below the 1.3314 level, it is best to refuse to open long positions until a new low at 1.3244 has been tested, which we fell just a few points short of yesterday. However, forming a false breakout there will be a signal to open long positions. I recommend buying the pound immediately on a rebound but only from a low of 1.3168, counting on an upward correction of 20-30 points within the day.

The initial task of the pound sellers is to return support at 1.3314 under their control. Getting the pair to settle below this range, and testing it from the bottom up, produces a good entry point for short positions, which will open a direct road to the lows of 1.3244 and 1.3168, where I recommend taking profits. The longer the uncertainty about the trade agreement with the EU persists, the stronger the pressure on the British pound will grow. If the bulls manage to take the market under their control and continue to push the pound up, it is best not to rush to sell, but wait for a false breakout in the resistance area of 1.3392 and open short positions only after that. I recommend selling GBP/USD immediately on a rebound from a high of 1.3467, counting on an upward correction of 20-30 points within the day. 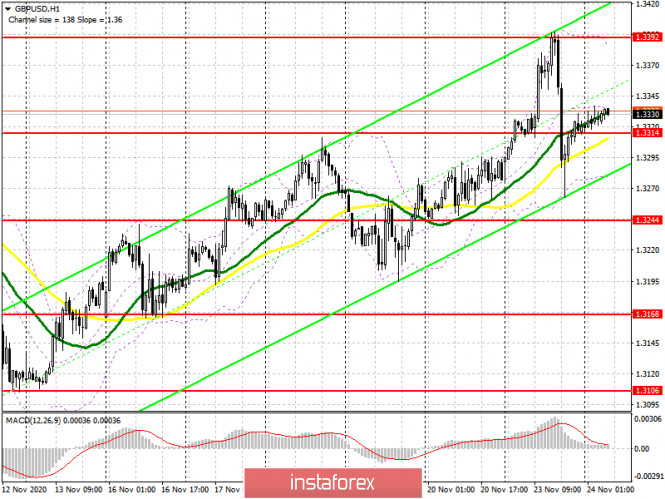 Trading is carried out in the area of 30 and 50 moving averages, which indicates that buyers are losing control over the market.

A Quick Guide to bbcon 2020 for Nonprofit Organizations

Work Smarter, Not Harder: This Tool Will Alter How You Create...

Indicator analysis. Daily review for the EUR/USD pair on 12/24/20

Stock markets grew ahead of the holidays

US stock indices closed lower amid statistics and incentives expectations