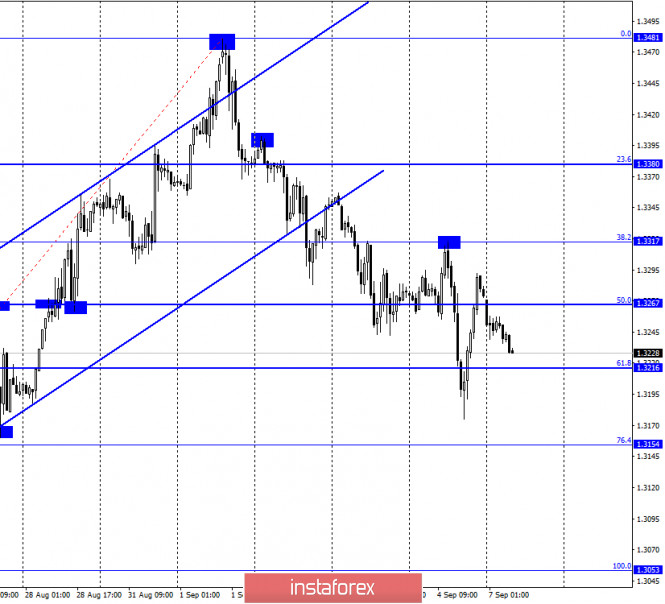 GBP/USD. September 7. COT report. Bear traders need to push through the lower border of the ascending corridor to continue

According to the hourly chart, the quotes of the GBP/USD pair performed a new reversal in favor of the US dollar and anchored under the Fibo level of 50.0% (1.3267). Thus, the fall of quotes resumed in the direction of the corrective level of 61.8% (1.3216). Closing quotes below this level will increase the pair’s chances of further falling towards the next corrective level of 76.4% (1.3154). No interesting messages have been received from the UK recently. The last thing that can be noted is another failure of negotiations on the relationship between Britain and the EU after Brexit is fully completed. However, traders now attach more importance to news from America. To be more precise, it is the news related to the most important and global topics. It seems that traders are afraid of everything that is currently happening in the United States. These are the following: (1) the ongoing coronavirus epidemic; (2) the upcoming presidential election, in which Donald Trump may make a new “performance” or simply refuse to leave office if he lost in the election; (3) the “cold war” with China; (4) the inability of Democrats and Republicans to agree on a new package of economic assistance, which has been discussed for two months. The dollar has been growing in recent days, however, I can’t say for sure that the upward trend is broken.GBP/USD – 4H. 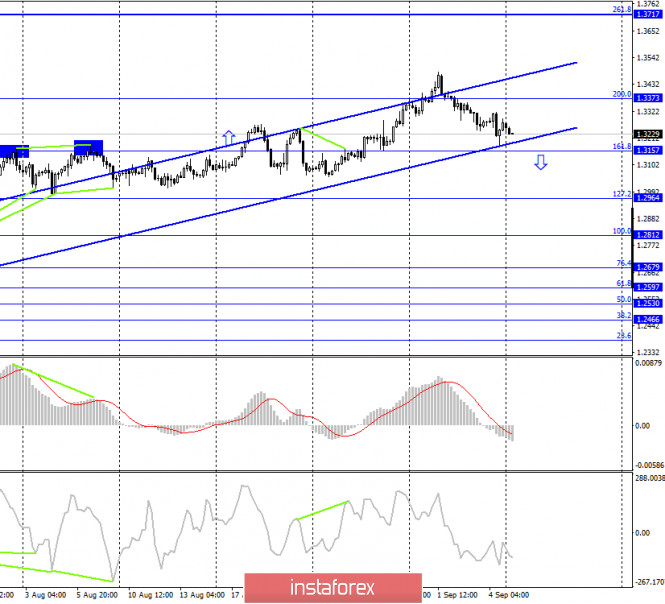 On the 4-hour chart, the GBP/USD pair performed a fall to the lower border of the upward trend corridor. Thus, the rebound of quotes from this line will work in favor of the British dollar and the resumption of growth in the direction of the corrective level of 200.0% (1.3373). Fixing quotes under the corridor will allow traders to expect a further fall in the direction of the next Fibo level of 127.2% (1.2964) and will change the general mood of traders to “bearish”. Emerging divergences are not observed in any of the indicators.GBP/USD – Daily. 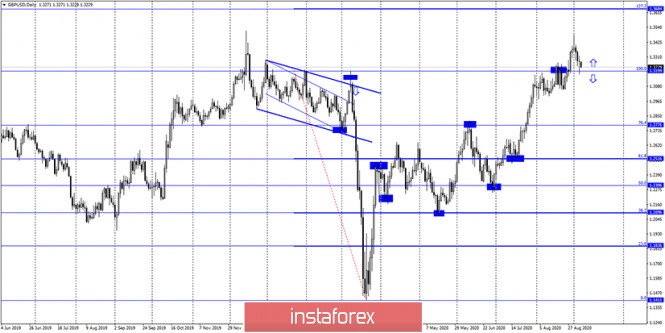 On the daily chart, the pair’s quotes maintain the probability of continuing the growth process in the direction of the corrective level of 127.2% (1.3684), as they continue to remain above the Fibo level of 100.0% (1.3199). Closing quotes below this level will work in favor of the US currency and start falling towards the level of 76.4% (1.2776).GBP/USD – Weekly. 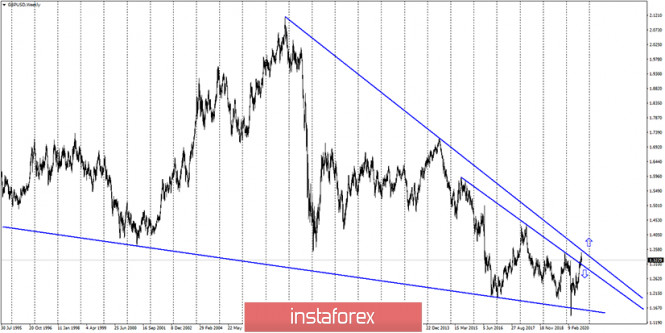 On the weekly chart, the pound/dollar pair closed above the lower downward trend line. Thus, the growth process can now be continued in the direction of the second downward trend line, fixing above which will further increase the probability of further growth of the British dollar.Overview of fundamentals:On Friday, the UK released the index of business activity for the construction sector, which was significantly lower than forecasts. More important reports came out in America, however, they did not lead to a single-digit increase in the dollar, which could be expected, judging by the values of these reports.News calendar for the United States and the United Kingdom:On September 7, the news calendars of the UK and US do not contain any interesting reports and speeches.COT (Commitments of Traders) report:

Unlike the COT report on the euro currency, the latest COT report on the pound was completely different. During the reporting week, major speculators again increased long-contracts, and also increased short-contracts. Thus, the mood of the “Non-commercial” group as a whole remained “bullish”. Over the past 10 weeks, the total number of long contracts focused on the hands of speculators has also increased significantly, while the number of short contracts has decreased. So, according to the latest report, I can’t conclude that major traders have already decided to get rid of the pound. Therefore, until the pair’s quotes close under the upward trend corridor on the 4-hour chart, the chances of resuming growth remain high.Forecast for GBP/USD and recommendations for traders:I recommend selling the British currency with the goal of 1.3100 if the quotes are fixed under the ascending corridor on the 4-hour chart. Purchases of the British dollar can be opened if there is a rebound from the lower border of the ascending corridor on the 4-hour chart with the goal of 1.3373.Terms:”Non-commercial” – major market players: banks, hedge funds, investment funds, private, large investors.”Commercial” – commercial enterprises, firms, banks, corporations, companies that buy currency, not for speculative profit, but to ensure current activities or export-import operations.”Non-reportable positions” – small traders who do not have a significant impact on the price.

Barak Obama is Proud of Daughters Sasha and Malia’s Activism ‘On...

This Millennial Entrepreneur Is Creating Her Own Seat at The Table

Technical analysis of AUD/USD for November 17, 2020