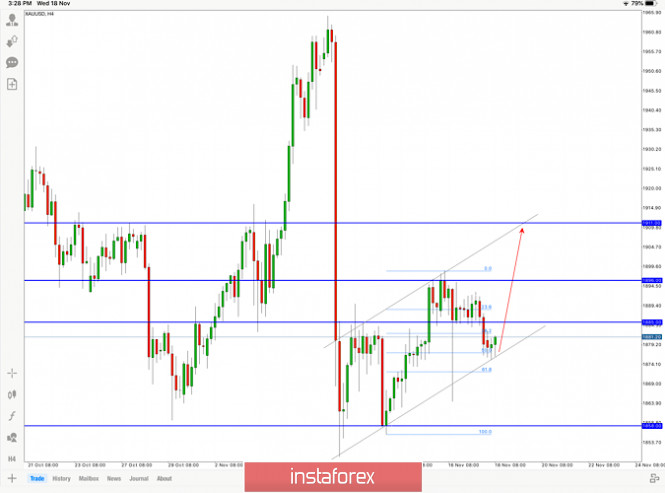 Gold suffered a staggering decline last week on the news of a potential coronavirus vaccine but has recovered some losses since then. As the public perception about the vaccine has cooled, risk assets have slowed their gains. That being said, gold seems susceptible to a continuation of its current trading range.

The technical outlook could hold the more pertinent clues as to which direction the price will head in the near future.

Confined between a bullish parallel channel and grasping for its next move, further consolidation upwards on the hourly chart seems likely for the time being. Still, a break through either of the barriers could open the door to an extension in that direction and eventually see gold test the levels beyond.

Currently the lower channel trendline which coincides with 50% retracement acts as an immediate support for the bulls to test 1,885.00, a significant barrier level. A breach above this level will push the price further to test the near-term resistance at 1,896.0. To that end, 1,911.0 is the next target resistance along with upper bounds of the commodity’s current trading range.

On the flip side, if the bullish channel fails to keep the gold price with its boundaries, a break below could lead the bears to test a critical support on the daily chart at 1,858.0.

Lindsey Graham, Already Behind In Money And The Polls, Jokes About...

Twice As Many Women Than Men Reportedly Unhappy With Careers. Here...

Overview of the US stock market on April 7

Black Opal Gets a Makeup Reboot Under the Ownership of Desiree...

NYC Doormen Who Watched Anti-Asian Attack Fired For Not Intervening

Forecast and trading signals for EUR/USD on February 3. COT report....