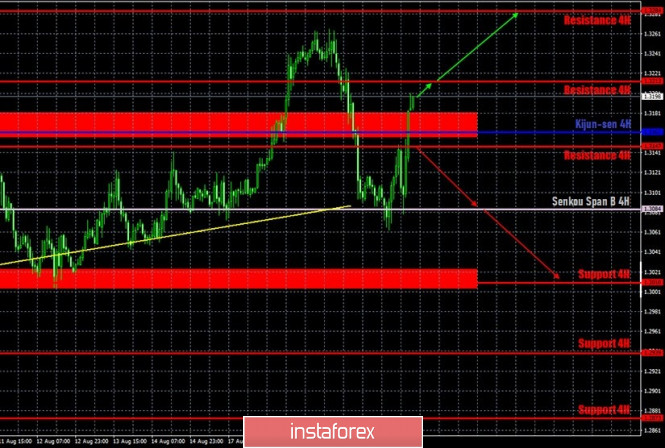 The GBP/USD pair nearly collapsed on August 20 until yesterday morning. And since yesterday morning, it has moved on to a strong growth and at the time of writing, offset 75% of losses. Thus, the pair’s quotes returned to the area above the critical line, the bulls quickly caught on, and the bears once again showed their weakness and unwillingness to attack. By the way, the European currency did not grow on the fourth trading day of the week. Thus, uncorrelation has occurred, which raises questions. If the pound sterling rose today but not on the basis of the US fundamental background, then why? One way or another, at this time the pair has excellent chances of resuming the upward trend, but at the same time, yesterday’s growth may just be a deep correction, after which the downward movement will resume. 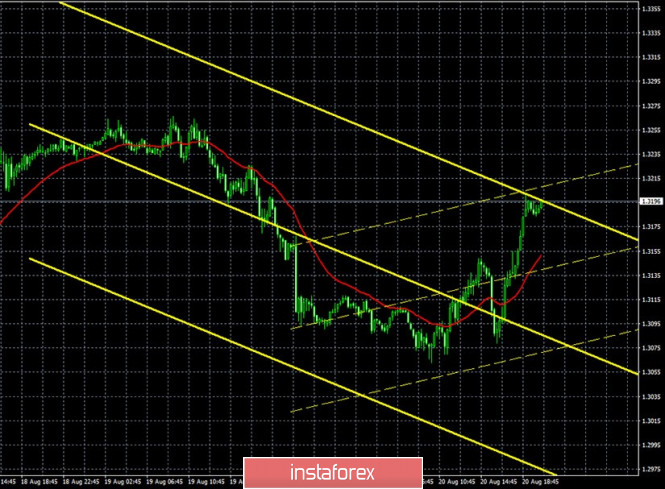 The lower linear regression channel has already turned up on the 15-minute timeframe, signaling a possible resumption of the upward trend. The latest Commitment of Traders (COT) report for the British pound, which was released last Friday, turned out to be almost an exact copy of the report on the euro currency. As for the euro, big traders opened new Buy-contracts in the reporting week (2,569) and closed Sell-contracts (8,405). Thus, the net position for non-commercial traders increased by almost 11,000 during the reporting week, which, in fact, means an increase in bullish sentiment. We could draw the same conclusions based on the nature of the pair’s movement itself. Given the fact that we have not seen a normal correction of the British pound for several weeks, we can make a clear conclusion that big traders are not selling this currency now. Therefore, even the COT report does not yet suggest the beginning of a new downward trend. At the same time, quotes started falling on Wednesday, August 19, but, first, this day will not be included in the new COT report, which is for the period of August 12-18, and secondly, the pair began to sharply grow on Thursday.. Therefore, it is unlikely that we will see a major change in the mood of non-commercial traders in the new report.

The fundamental background for the GBP/USD pair on Thursday was not strong or interesting. During the day, not a single macroeconomic report was published in the UK, but there was one report on applications for unemployment benefits in the United States, however, it could not cause the dollar to fall by 130 points. The fall began in the morning, and the report was released in the afternoon. Thus, there can be only two explanations. Either traders caught on very quickly and started buying the pound again, selling off the dollar, or the market received some optimistic news from the UK. However, no news has been received from the UK, so we are leaning towards the first option. UK business activity indices are also set to be published in the last trading day of the week, but the macroeconomic background currently plays a low role in the exchange rate.

There are two main options for the development of events on August 21:

1) Buyers finally let go of the pound dollar pair, which immediately led to a landslide fall. However, this process did not last long. Since the price returned to the area above 1.3157-1.3181, now you are advised to consider long positions while aiming for 1.3213 and 1.3284. A rebound from any target can provoke a strong new round of the downward movement. Take Profit in this case will be up to 70 points.

2) Bears gave up very quickly and released the initiative from their hands. Thus, settling the price below the Kijun-sen line (1.3156) is required, so that the downward movement can resume with the targets of the Senkou Span B line (1.3084) and the support level of 1.3010. Take Profit in this case will be from 50 to 100 points.

Hot forecast and trading signals for the GBP/USD pair.

We recommend that you also explore the fundamental background in these articles:

Overview of the EUR/USD pair. August 21. FOMC minutes: nothing interesting. US tech giants do not benefit from Trump becoming president a second time. The war with China will continue.

Overview of the GBP/USD pair. August 21. Ongoing Brexit talks. Boris Johnson will have to rebuild the economy and keep Northern Ireland and Scotland as part of Britain.

How to Drive Local Foot Traffic With Twitter Ads

Markets express doubts towards Biden’s plan and open with declines

Technical Analysis of AUD/USD for January 19, 2021

USDCAD bounced off support, potential for a further rise!