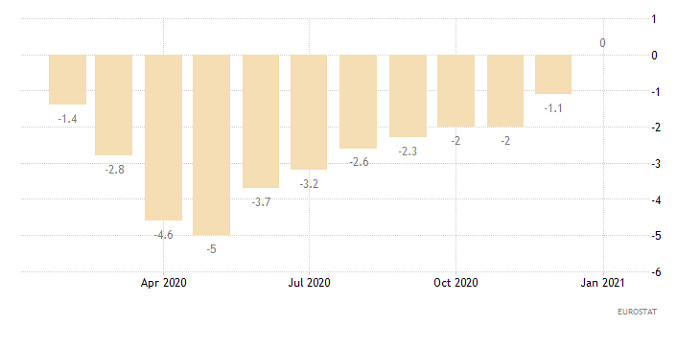 Even good macroeconomic statistics could not help the single European currency, which began to decline again after a slight stagnation. But the decline in producer prices has stopped and showed zero growth year-on-year. Although in the previous month, they declined at a rate of -1.1%. Considering the fact that producer prices are a leading indicator for inflation, the end of their decline means that inflation will continue to rise. From a formal point of view, the data is incredibly positive. But they did not make any impression on the market participants. Just like the final data on business activity indices, which turned out to be much better than the preliminary estimates. In particular, the index of business activity in the service sector increased from 45.4 to 45.7, although it should have decreased to 44.7. The composite index of business activity, instead of increasing from 47.8 to 48.1, rose to 48.8.

The single European currency began to decline after the publication of all these remarkable data. And this process stopped just before the publication of American statistics. So, no macroeconomic statistics were of interest to market participants yesterday. Although no, I was interested. But not the one that was published. Investors are waiting for today’s release of retail sales data. An increase in inflation and the end of deflation is fine, but what is the point in all this, if sales are reduced at the same time. After all, one of the main meanings of consumer price growth is revenue growth and profit growth. So, if prices rise and sales fall, then there is no effect. And if sales decline even faster than prices rise, then we have to talk about a decrease in profits. This is exactly what the data on retail sales should show, the growth rate of which, now stands at 0.6%, can be replaced by a decline of -1.2%. The decline is much more significant than the increase in prices, indicating that the profits of companies will be reduced. And this will necessarily lead to an increase in unemployment, and an even greater compression of consumer demand. By the way, data on this very unemployment rate is also published, which should increase from 8.3% to 8.4%. In other words, the situation is only getting worse, and there is no need to talk about economic recovery yet. 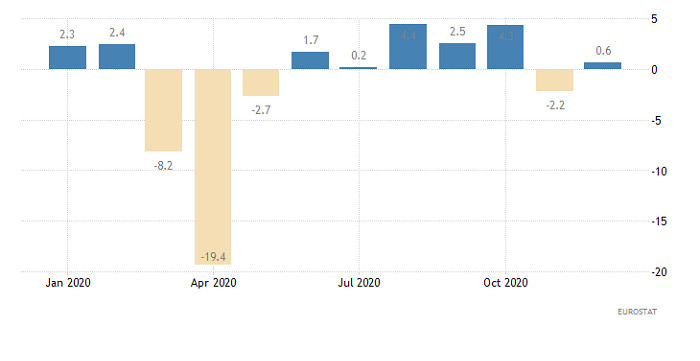 After a short price fluctuation in the range of 1.2080/1.2095, the EUR/USD currency pair managed to show a downward interest. As a result, the euro weakened in the direction of the value of 1.2045, where a new stagnation occurred.

The market dynamics has an indicator close to the daily average, which positively affects the speculative interest in the market.

If we proceed from the current location of the quote, then we have a variable pivot point in the face of the price area of 1.2040/1.2050, which is likely to soon fall under the onslaught of sellers.

Considering the trading chart in general terms, the daily period, it is worth noting that the January correction move, in the structure of which the quote moves, is still relevant to the market.

It can be assumed that keeping the price below 1.2040 will immediately lead to an increase in the volume of short positions, and this will send the quote in the direction of the psychological level of 1.2000.

From the point of view of a comprehensive indicator analysis, we see that the indicators of technical instruments on the hourly and daily periods signal a sale due to the movement of the quote in a corrective pattern.

USDJPY reached target and ready for bounce to 105

Forecast and trading signals for EUR/USD on February 24. COT report....

Long shadows and a dubious stop: Results of the cryptocurrency market...

Technical Analysis of ETH/USD for November 11, 2020

Technical analysis of EUR/USD for October 2, 2020

US to cut emissions by half

Technical Analysis of BTC/USD for January 26, 2021