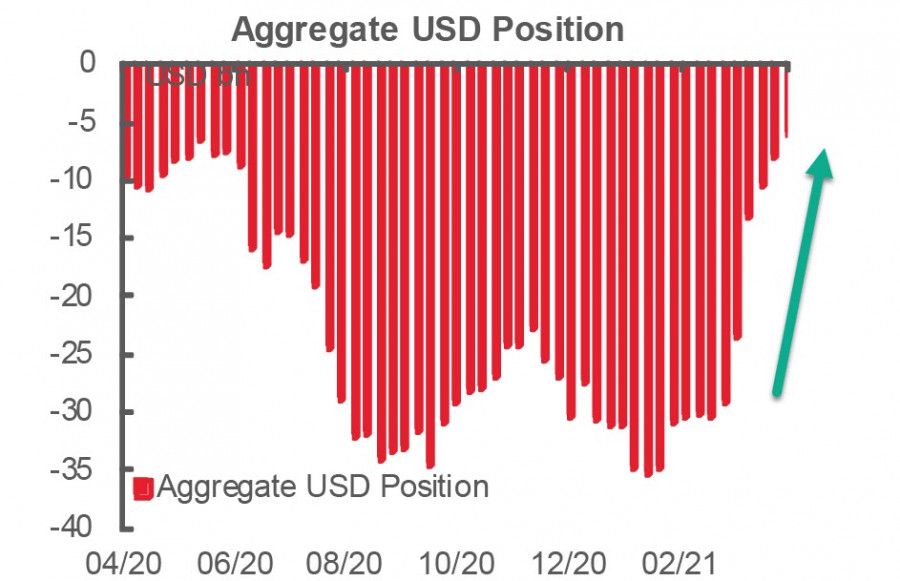 Following the CFTC report last Friday, the trend to exit short positions on the dollar continues for the seventh week in a row. The total short position decreased by 2.1 billion to 6 billion, which is the lowest figure since May 2020.

Last week, the US dollar clearly slowed down its growth, which is explained both by some demand for risk, reflected in the sale of defensive assets, and new records on the US stock markets. However, the CFTC report showed that the sale of defensive assets is almost completed. There was a weak positive trend in the Japanese yen, while gold’s long position rose by 4.8 billion at once, playing off an overnight decline for several weeks in a row.

A stronger-than-expected US producer price index (a benchmark of 3.1% against a forecast of 2.7%) helped boost bond yields, with the 10-year UST yield rising to 1.66% (an intraday high of 1.685%). Nevertheless, yields have consolidated over the past week, which gave the stock indexes the opportunity to continue growth.

The US markets continue to play two powerful bullish factors – the high rate of vaccination and possibly, inflated expectations for the speed of economic recovery. The key to the dollar’s short-term outlook will be whether yields continue to consolidate near current levels or rise. In turn, this is based on forecasts for inflation. On Tuesday, inflation data for March will be published, forecasts are significantly higher than February levels, and Fed members are actively commenting on the current situation with an emphasis on the bullish scenario. For example, Kaplan predicts continued growth in yields, and despite another massive bond issue (100 billion last week), notes that there is no shortage of capital flowing into bonds. He also suggests that cuts in bond purchases may begin in the 3rd quarter, hinting that the tightening of financial conditions will not harm the economy.

Meanwhile, Fed Chairman Powell was even more outspoken on Sunday, with a direct quote: “We feel like we are in a place where the economy is about to grow even faster and job creation is much faster.” In general, the Fed expects official unemployment to sharply decline to 4.8% by the end of the year.

The US dollar remains clearly bullish despite some slowdown.

Fabio Panetta, ECB Supervisory Board Member, said that Europe will be worse than the US. In his opinion, the euro zone will not return to the pre-crisis growth trajectory, which means losing two years. Panetta explained the reasons that the ECB will continue to restrain yields, since the growth in US yields may spread to the euro area, which will have a negative impact on both the economic recovery and inflation. If we assume that Panetta somehow voices the ECB’s position, then we need to conclude that the ECB is ready to continue intervening in order to prevent the growth of yields, and therefore, the euro’s growth. This is perhaps the most obvious bearish factor for the euro.

Euro’s net long position declined by 776 million over the reporting week, but the target price stopped declining. This clearly happened due to the fact that bond yields are growing, despite the restraint of the ECB. 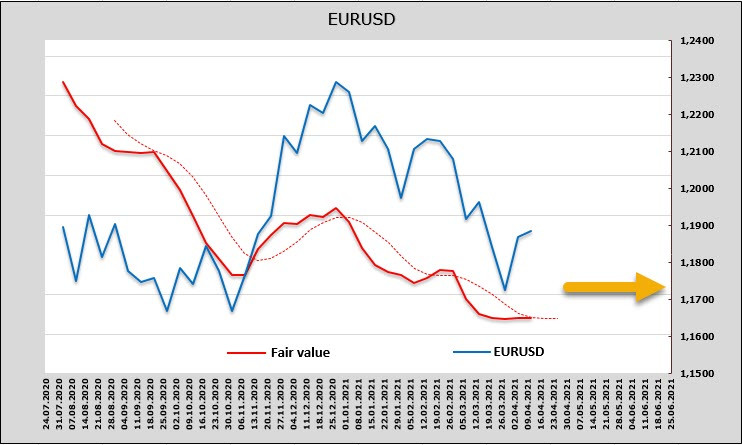 The euro is inclined downwards in the long-term. It is possible to reach the target of 1.15 next month, however, consolidation is more likely in the short-term. The support for 1.17 will hold out in the coming days, so it is necessary to wait for a new impulse to emerge.

The pound looks noticeably weaker than the euro. The net long position declined by 420 million during the reporting week, and the yields and the state of the stock market lag behind the eurozone. If the pound looked like a clear favorite some time ago due to the first priority of vaccination, then on the morning of April 12, it is rapidly losing all its advantage. 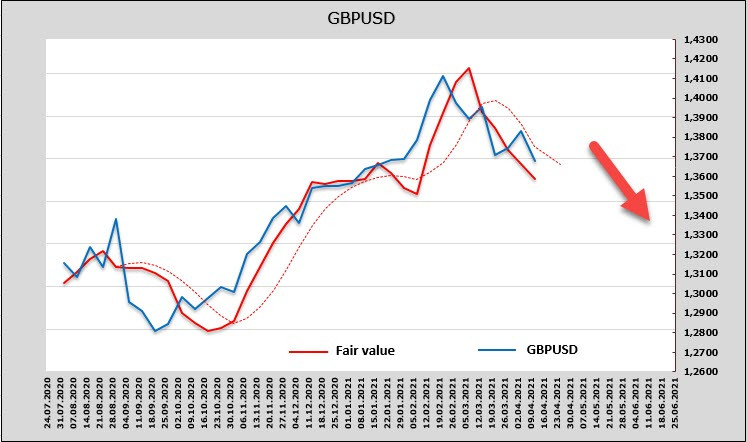 On Tuesday, the situation may change. Several macro statistics data will be released, but the bearish scenario should be considered a priority right now. The support level of 1.3665 held out at Monday’s opening, but there is a high probability that it will be retested. The medium-term target is set at 1.3440/90.

Will Brent Grow Thanks to the US Presidential Election?

GBP/USD: plan for the European session on September 14. COT reports....

Frost in Texas has caused a spectacular rise in oil prices