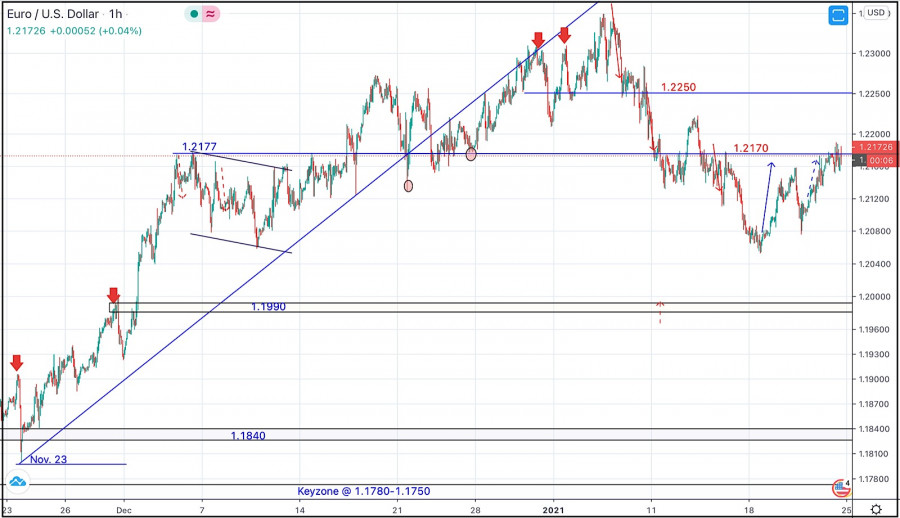 By the end of November, Signs of BUYING Pressure have been initiated around the depicted price zone of 1.1800-1.1840.

Shortly after, the EUR/USD pair has demonstrated a quick upside movement.The pair has targeted the price levels around 1.1990 initially which exerted considerable bearish pressure bringing the pair back towards 1.1920 which constituted a temporary KEY-Zone for the EUR/USD pair.

That’s why, another episode of upside movement was expressed towards 1.2160 where a false breakout above the price level of 1.2200 was regarded as a considerable bearish reversal signal.

Three weeks ago, a short-term reversal pattern has been demonstrated around 1.2265. Intraday downside retracement to the downside was expected to occur.

However, the EUR/USD pair has failed to pursue towards lower price levels. Instead, the pair has spiked above the depicted Weekly HIGH around 1.2270 before the current bearish rejection was initiated around 1.2350.

Bearish closure below the mentioned price zone of 1.2250 – 1.2200 enabled a quick bearish decline towards 1.2170 then 1.2150 which corresponded to a previous congestion zone as well as a prominent key-zone.

Persistence below the price level of 1.2170 has turned the intermediate outlook for the pair into bearish and should enhance further downside decline towards 1.2080 and probably 1.2040.

On the other hand, the current upside pullback towards 1.2170 should be considered for SELLING the EURUSD pair again.

SELL Positions that were suggested around the price levels of 1.2300 are already running in profits.

EUR/JPY How Long The Current Growth Could Be?

EUR/USD: plan for the US session on March 4 (analysis of morning trades)

Fighting for Patient Protections While Attacking ACA — Hard to Have...

GBP/USD: plan for the European session on December 23. COT reports....

Hot forecast and trading signals for GBP/USD on November 9. COT...

5 Things to Do Now to Set Your New Business Up...

EURUSD: The euro continues to fall, and Germany plans to lift...

Forecast and trading signals for Bitcoin on February 10