On the eve of the OPEC+ meeting scheduled for September 17, Brent quotes stabilized near the $ 40 per barrel mark. However, the current situation has little in common with the events in June-August, when consolidation came to the market for a long time. Today, oil volatility has gone up sharply, which suggests a high probability of a serious price movement. The fundamental analysis and indicators of the options market signal that this will be a movement to the south.

The dynamics of the volatility of oil

Unfortunately, global demand is not recovering as quickly as previously thought. OPEC predicts that the indicator will decrease by 9.46 million b/d by the end of 2020, although a month ago it was a figure of 9.06 million b/d. The International Energy Agency expects demand to fall by 8.5 million b/d (which is also worse than the previous forecast) to 91.7 million b/d, the lowest level since 2013. Global supplies, on the contrary, will grow to 91.7 million b/d by the end of the year, which is lower than in 2019, by 9.3 million b/d. Thus, the IEA believes that black gold reserves will decrease more slowly than previously expected, which will put pressure on prices.

The expansion of contango indicates a near-term oversaturation of the oil market, including due to the second wave of COVID-19 and the associated re-closure of economies, as well as due to a gradual reduction in the volume of OPEC+ commitments to reduce production. The second consecutive increase in US reserves of black gold (according to Bloomberg experts, the figure for the week to September 12 will grow by 2.3 million), as well as lower export prices from Saudi Arabia, Iraq, and the other Gulf States, confirm the slowdown in the recovery of global demand.

The dynamics of the US oil reserves 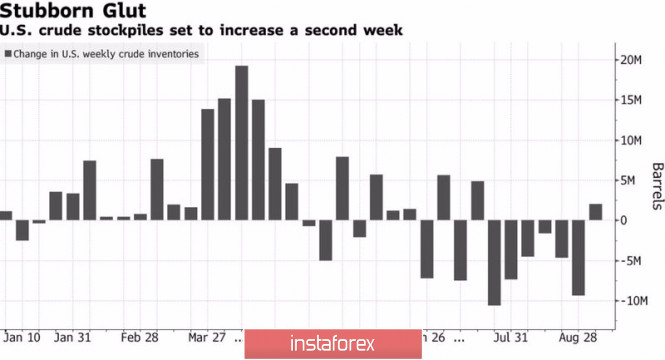 “Bears” for Brent and WTI are not afraid of the second hurricane in the last month approaching the Gulf of Mexico, the growing world stocks, and the weakness of the US dollar. After the previous natural disaster, oil companies quickly recovered, and prices went down. American stock indices have run ahead of themselves before, now they are responding to positive news about vaccines, however, their large-scale implementation is still too far away to be able to talk about victory over the pandemic. The fall in the USD index on the eve of the FOMC meeting looks quite logical – investors are counting on the “dovish” rhetoric of Jerome Powell, however, there may be a rebound.

Meanwhile, the futures market signals that the chances of developing a correction in Brent and WTI are higher than the probability of restoring the upward trend. The risks of a reversal in oil are going down, which means that traders often prefer to insure against falling prices than against their growth. 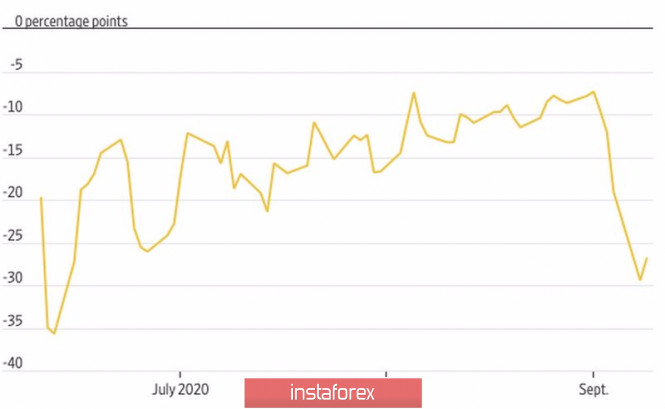 In my opinion, the correction of the North Sea grade risks continuing, so updating the September minimum near $ 39.35 per barrel may be the basis for opening shorts. However, the long-term prospects for Brent remain bullish, so the growth of quotations above $ 41.35 should be used for buying.

Technical picture, like the fundamental, promises big problems for the dollar

NBA Season Begins With Fans and Their Money Stuck At Home

Technical Analysis of BTC/USD for November 13, 2020

Markets are not in favor of Biden’s possible tax increase. Overview...