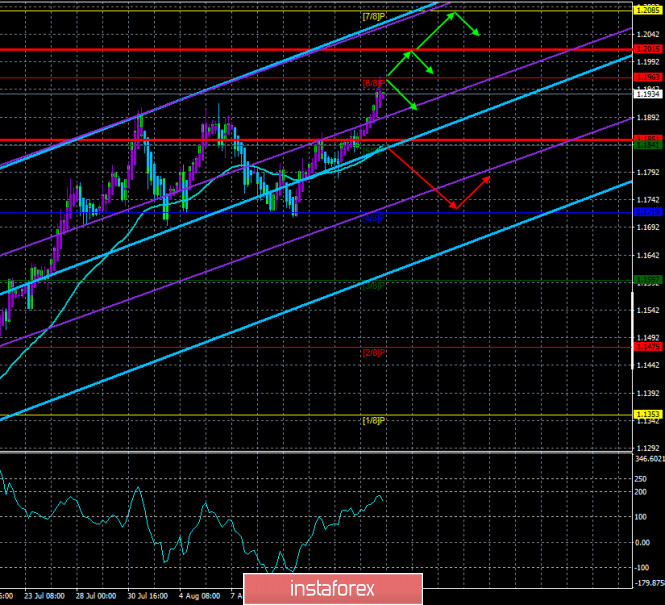 Overview of the EUR/USD pair. August 19. Americans are going to vote for Biden not because he is good, but because Trump

The EUR/USD currency pair has been trading higher since August 12 after it failed to overcome the Murray level of “8/8” – 1.1719 for the third or fourth time. At the moment, everything is going to the point that the price will leave the side channel, where it was before three weeks ago. It seems that two hundred points of correction is the maximum that the US dollar can count on now. If this is the case and the correction is complete, and the markets are preparing a new round of upward trend, then the US currency is extremely bad. It turns out that market participants for three weeks did not find any reasons to correct the pair by at least 300-400 points, after an increase of 8-11 cents in three months. Traders did not find even technical reasons, and did not even want to fix a part of the profit on open long positions. So they don’t believe in the dollar. The same opinion is reflected in the latest COT report, which showed that professional traders continue to increase their purchase contracts. Thus, the upward trend will continue again if in the near future the Heiken Ashi indicator does not urgently turn down and an urgent drop in quotes does not begin.

Meanwhile, the most interesting information came from America. Recent research by the Wall Street Journal shows that more than 58% of voters who support Joe Biden’s candidacy in the election actually oppose Donald Trump. About 50% of all respondents would vote for Biden if the election were held right now. However, almost 3/5 of those 50% will vote for Biden simply because they don’t want to vote for Donald Trump. Statistics on the current US President are somewhat different. For Trump right now, 41% of respondents are ready to cast their votes, of which almost all voters really support Trump, and are not ready to vote for him simply because they do not want to vote for Biden. Thus, the results are as follows. Fewer Americans are still ready to vote for Trump than for Biden. And, most likely, the balance of power between the Republican and the Democrat will not change until November 3. Despite the fact that just a few days ago, another opinion poll showed that the gap in political ratings between opponents is narrowing and is already just a couple of percent. We even then questioned these results, because they looked too fantastic. Recent social research shows that the gap between Biden and Trump remains the same – about 10%. However, it should be noted that Trump voters are more aware of their choice. They choose Trump, and do not vote against another candidate.

At the same time, former first lady Michelle Obama called Donald Trump the most wrong President of all and called for voting for Joe Biden in the election. “He had more than enough time to prove that he could do the job, but he jumped over his head. He just can’t be what the country needs,” Mrs. Obama said. Michelle Obama called what is happening now in the country “chaos” and said that the situation will not change under Donald Trump. The former first lady also criticized the President for his actions in suppressing rallies and protests, as well as his immigration policy.

Donald Trump, who never had a word in his pocket, did not take long to respond to Mrs. Obama. He said that the administration of her husband, Barack Obama, was the most corrupt in US history. Recall that earlier, Donald Trump accused Barack Obama and other high-ranking Democrats of conducting surveillance of his election campaign in 2016 and tried in every possible way to prevent him from winning the election. Also, Donald Trump, speaking in Wisconsin as part of his election campaign, said that “if the Democrats in the US take the reins of government in their own hands, it will be the second Venezuela”. In addition, Trump opposes mass voting by mail, believing that the election results can be falsified. “You can’t send out 16 million ballots, no one knows who will actually receive them. They will be at the disposal of postal employees, who can take them in batches,” the US leader said. This is the situation in America 2.5 months before the election.

And it should be noted that everything that is happening now in the States clearly does not contribute to the growth of the US currency. Despite the fact that the US stock market is breaking records in the midst of the economic crisis, the US currency continues to depreciate. And experts, all as one, say that the recovery of the American economy will be extremely difficult and long. On Tuesday, August 18, no macroeconomic reports were published in the States. This was also the case in the European Union. However, this did not prevent traders from continuing moderate purchases of the euro currency and selling the dollar. On Wednesday, August 19, the EU and America will again not have any important macroeconomic publications, although the news calendar is not empty. The European Union will release the consumer price index for July, but we have repeatedly said that inflation is not an important indicator now. US inflation accelerated, according to the latest report, but the US dollar was not affected. Most likely, the same reaction of the markets will be tomorrow. In America, the publication of the minutes of the meeting of the Federal Open Market Committee is scheduled for the evening, which never causes a serious reaction from traders. Especially when no important decisions were taken at the meetings themselves. Of course, we do not recommend losing sight of this event, because anything can happen, surprises are not excluded. However, from our point of view, the macroeconomic background tomorrow will not have any impact on the mood of market participants. This means that technical factors will continue to be in the first place, according to which it is recommended to trade the euro/dollar pair. Both linear regression channels are still pointing upward, as is the moving average line. Thus, all trend indicators now support the continuation of the upward trend. 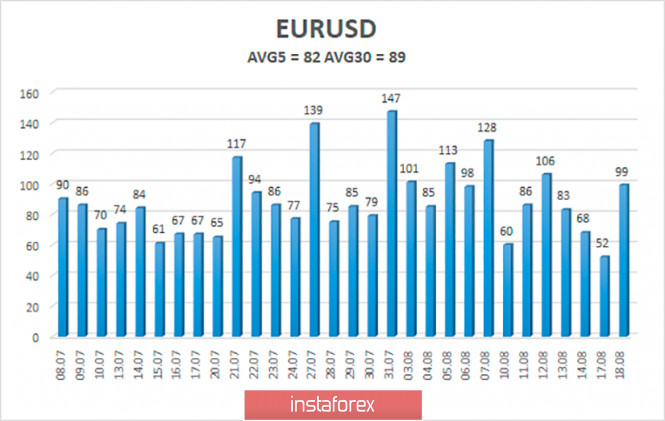 The volatility of the euro/dollar currency pair as of August 19 is 82 points and is characterized as “average”. Thus, we expect the pair to move today between the levels of 1.1851 and 1.2015. The reversal of the Heiken Ashi indicator downwards signals a downward correction.

The EUR / USD pair resumed its upward movement, managing to break out of the side channel. Thus, today it is recommended to continue trading for an increase with the goals of 1.2015 and 1.12085 as long as the Heiken Ashi indicator is directed upwards. It is recommended to consider short positions only after fixing the price below the moving average line with the first goal of the Murray level of “4/8” – 1.1719.

Technical analysis of USD/JPY for October 20, 2020

Technical Analysis of ETH/USD for October 21, 2020

EUR/USD: plan for the American session on August 20