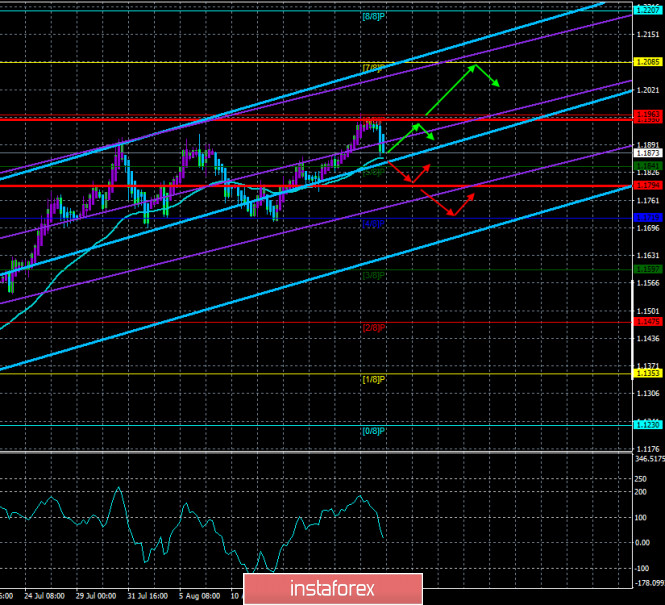 Overview of the EUR/USD pair. August 20. Is Joseph Biden the American version of Jeremy Corbyn? What can a Democratic presidential

On Wednesday, August 19, trading was held in a very quiet and calm channel. After the price managed to break out of the three-week 200-point side channel, it seems that traders again do not know what to do next. After all, the technical picture for the euro/dollar pair has not changed. The US dollar has been heavily oversold, and remains so. There was no normal correction for the pair either. And yet, in recent weeks, the overall fundamental background in America has become less negative. First, somehow in many American cities rallies and protests against police violence and racism “Black Lives Matter” ended. And this is a small victory, because they very much hindered the recovery of the economy, and at the same time were an excellent springboard for the spread of the “coronavirus”. Second, the coronavirus epidemic has been on the wane in recent weeks. In the last three days, no more than 50,000 illnesses were recorded every day. This is still a lot, but at least this figure has crept down, which means the situation is gradually improving. Third, the bottom of the US economy has probably already passed. Although the recovery promises to be long and difficult, but still the worst is over. But in the European Union, nothing has changed for the better, everything is as it was, and remains quiet and calm. However, there are several factors that may have caused the US currency to resume its decline. First, this is another escalation in relations between China and the United States. Now these two countries are at war for/against Huawei, which US President Donald Trump has accused of spying and stealing the data of American citizens. Second, Republicans and Democrats cannot agree on a new package of economic assistance to small and medium-sized businesses, as well as to Americans who lost their jobs during the pandemic. Differences remain over the size of the package. Trump is offering no more than $ 1 trillion, which means $ 200 in “coronavirus surcharges” to every unemployed person, Democrats are pushing for $ 600 in surcharges. Trump wants Americans not to sit at home without work and not live on unemployment benefits, and Democrats believe that the unemployed should be helped in any case, and not driven into poverty. Third, the political crisis in America is gaining momentum and may soon reach its climax. Biden and Trump continue to conduct their election campaigns, all leading publications and media continue to count the political ratings of both candidates, and in general, this topic is now the most popular in America.

Just yesterday, we wrote that Americans, judging by the polls, are going to vote for Biden not because he is good, but because Trump is bad. The list of “merits” of Trump is so extensive that it does not raise questions why many Americans do not want to see him in the presidential chair for a second term. The biggest claims against Trump are a complete failure in the fight against the COVID-2019 epidemic, as well as a record decline in the American economy. Thus, the majority of Americans are really ready to vote on November 3 on the principle of “just not Trump”. However, if Trump loses, and so far everything is going to this, one can not help but wonder what awaits the United States with President Biden? According to many American political analysts, Biden is one of the most unattractive presidential candidates in the history of the United States. They call him “their guy” and respect him for his human qualities and the hardships of life that he had to go through. For example, Robert Gates, the Secretary of Defense under Obama, said that it was impossible not to love Biden, but at the same time, he was wrong on almost any issue related to foreign policy and national security. That is, in fact, Biden can become President not because of his knowledge of the economy, the ability to lead the country, the ability to negotiate, in general, not because of the leadership qualities that the President should undoubtedly have, but because he is “his own guy” and after Trump, it is better to choose someone “calmer”. Many experts also believe that Biden will lead the country without a certain political course, without reformist plans. That is, in fact, it will be extremely similar to the former leader of the British Labor Party, Jeremy Corbyn, who during the parliamentary wars over Brexit and the parliamentary elections suffered a crushing defeat just because he did not have a clear policy that would offer his voters. Biden may become a complete antipode of Trump, but the results of his rule may not differ much from the results of the rule of Trump himself. It is unlikely that Biden will further worsen the situation of the United States, with him there will almost certainly be a recovery and growth, because this always happens after a crisis, but at the same time, in the international arena, Washington may again make important mistakes that will eventually “return” to the country. Trump is a pure businessman who is used to promoting and pushing his personal interests. This is what he did as President of the United States for almost four years, often forgetting that what is good for him is not always good for the country. He was well versed in Economics, but at the same time could not agree with anyone, fought and conflicted with everyone who did not support his point of view. As a result, he made a huge number of enemies in the US government and around the world. Biden, according to many, who will turn 78, also does not have the qualities that a President needs. First, he is already too old and there is a big question in his energy, will he be able to lead the country, especially when in the last year of the presidency, he will be 82 years old? Second, Biden does not give a clear political course. It is unclear what policy the White House will follow, for example, in the conflict with China. Third, Biden is often in the shadows. Thus, we believe that the Americans will choose Biden on the same principle that the conservatives in Britain were chosen in the parliamentary elections. Then it was “we want to leave the EU”, now it will be “we do not want Trump to be president”. 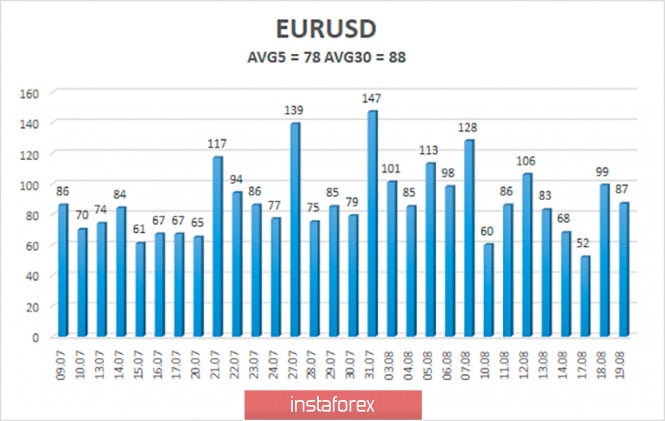 The volatility of the euro/dollar currency pair as of August 20 is 78 points and is characterized as “average”. Thus, we expect the pair to move today between the levels of 1.1794 and 1.1950. A reversal of the Heiken Ashi indicator to the top will signal a possible resumption of the upward trend.

Mompreneur Strikes Deal With Walmart Just 2 Years After Launching Her...

Bucket List: Top 15 Best Things to Do in Kuantan, Malaysia

Elliott wave analysis of Ripple for May 5, 2021