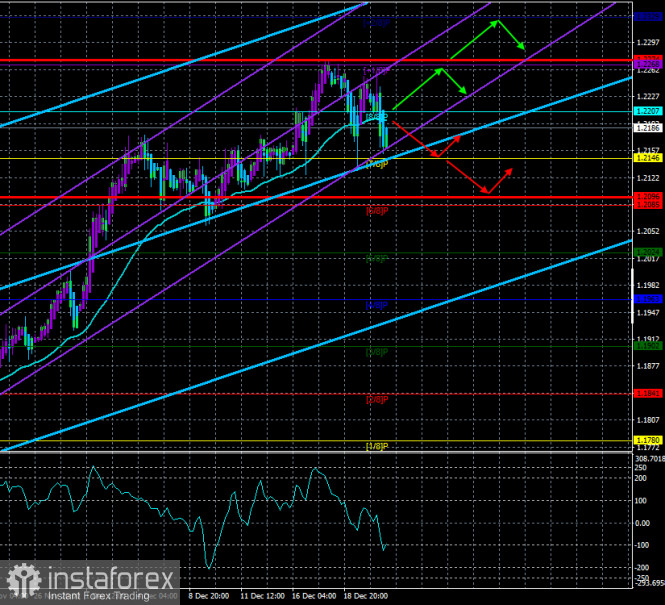 Overview of the EUR/USD pair. December 23. Markets rushed to panic over the new strain of COVID-2019. The US dollar is receiving

The European currency paired with the US dollar recovered very quickly after falling on Monday. Now that it has become clear that the collapse will not continue, we can draw certain conclusions. However, first, let’s look at the technical picture since it is the technical factors that we continue to put above all else. Simply because the fundamental background and macroeconomic statistics continue to be ignored by traders. What do we have? On Monday, the euro/dollar pair broke the moving average line, however, it immediately returned to the area above the moving average. Yesterday, I made new attempts to start a downward movement. Thus, the bears are trying their best to start forming a new downward trend, but so far they are extremely weak, and buyers simply do not leave the market and do not give up their positions. So now it looks like the upward trend is going to resume anyway. A small correction – and the euro will start growing again. As for justifications for such a scenario, there are none. In recent months, market participants simply continue to buy the euro and sell dollars, without paying any attention to whether there is a logic in such behavior or not.

Let’s go back to the “foundation”. As we have already said, the economic and political “foundation” is ignored by traders. The only exception is epidemiological news. By and large, in 2020, the markets first worked out with interest the beginning of the pandemic, and then only a few times reacted to important and serious news about the beginning of the second “wave” and the creation of a vaccine against the “coronavirus”. However, in general, markets continue to be guided by their considerations when making trading decisions. Thus, it is possible that the US dollar rose yesterday due to reports of a new strain of “coronavirus”, and fell in the afternoon due to reports of an agreement by Congress to provide the American economy with $ 900 billion in aid, but this news w left behind. Also, it is impossible to conclude with certainty that this news was generally worked out by the markets. The problem is that the euro/dollar pair has been in an upward trend for a long time. Sooner or later, any trend ends. Why not now? On the eve of the New Year and Christmas, many traders will want to take profits and leave the market to return after the holidays. Thus, such traders will first of all close trend positions, that is, long ones. Accordingly, such operations in the foreign exchange market will lead to a fall in the quotes of the euro/dollar pair. So, perhaps, on Monday, market participants began to simply fix profits on long positions?

Also, it is worth separately dealing with the question of why the US dollar sank on the news about assisting American citizens, the unemployed, small, and large businesses? Essentially, this means that this $ 900 billion will either be raised or printed. One way or another, this money will flood the economy and the supply of US currency in the foreign exchange market will simply grow. However, in practice, this money will be distributed among the subjects of the economy, and not sold in pure form on the foreign exchange market. Thus, a strong fall in the dollar based on this factor alone is not worth waiting for. If the US currency has been growing without any problems for 9 months, when often there are simply no special reasons for this, then on Monday, the US currency was growing because Congress approved the adoption of a package of stimulus measures? It turns out that if there are no reasons for the fall of the dollar – the dollar falls, if there is, the dollar also falls? Illogical.

Next, a topic with a new strain of “coronavirus”. As it turned out, just the next day after Boris Johnson’s statements scared the whole world, scientists already know about at least a dozen other mutations of the “coronavirus”, and the strain that Boris Johnson spoke about has been known since September. Moreover, the company BioNTech, which together with Pfizer developed the world’s first vaccine against COVID-2019, said that it is still unclear whether the vaccine can cope with the new strain, but in any case, now that an effective vaccine already exists, it will not be difficult to develop another vaccine for the new strain and will not take much time. Thus, it turns out that the fears were in vain. The new strain is not more deadly than the usual COVID-2019, and its higher contagiousness still needs to be proven. Even if it’s higher, so what? Now we are talking about vaccination of the entire population. There are only two options: either vaccinate everyone or create mass immunity, for which the majority (of the world’s population, country) must get over the virus. Thus, it turns out that the dollar is now strengthening not based on data on a new strain.

Based on all of the above, we continue to draw disappointing conclusions. At first glance, it seemed that the markets were reacting to the fundamental background, but now another opposite conclusion suggests itself. Most likely, the reasons for the strengthening (by the way, very weak) of the US dollar are either purely technical in nature or “speculative”. Thus, technical factors remain in the first place in terms of importance. The fundamental background and macroeconomic statistics will continue to have a very weak impact on the movement of the pair. We have repeatedly noted that in the fourth quarter, which has long begun, it is the European economy that should lose a few points of GDP due to the repeated “lockdown” in November-December. Therefore, it is the European currency that should already fall against the dollar, since there was no “lockdown” in the States. Even if traders are waiting for official GDP data, which will appear no earlier than January, this is still illogical, since the European economy is already falling (or has already completed this process). Business activity indices in the US and EU services sectors confirm this. Thus, we continue to wait for a new strong downward trend and continue to wait for technical signals and confirmations of this hypothesis. 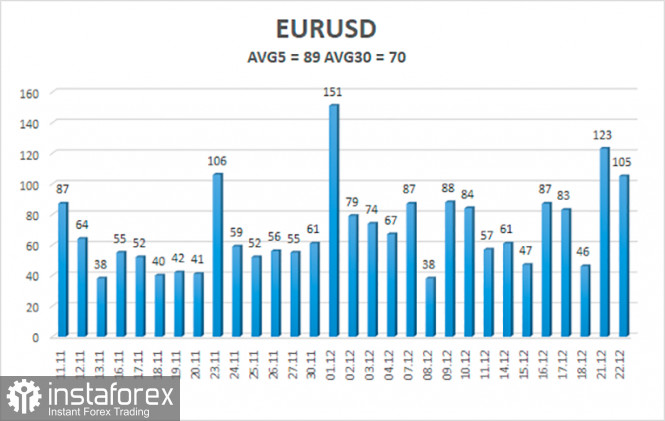 The volatility of the euro/dollar currency pair as of December 23 is 89 points and is characterized as “average”. Thus, we expect the pair to move today between the levels of 1.2096 and 1.2274. The reversal of the Heiken Ashi indicator to the top signals a new round of upward movement.