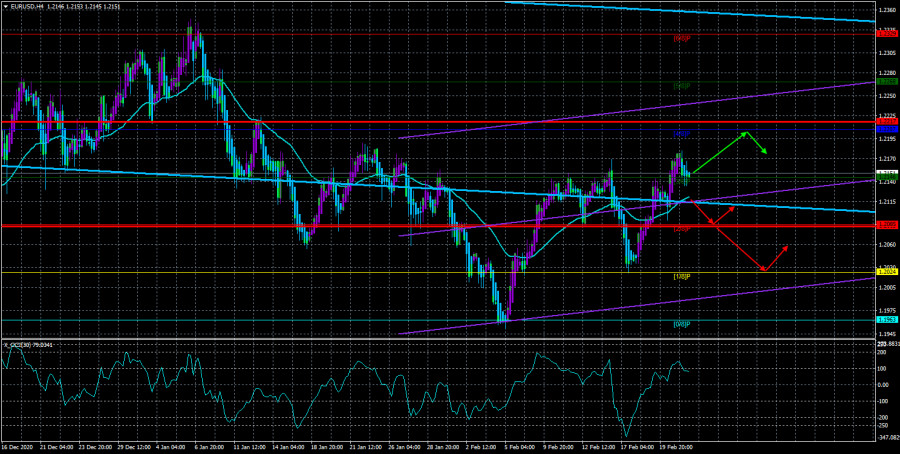 Overview of the EUR/USD pair. February 24. The dollar is waiting for a verdict in the form of information about the approval

The EUR/USD currency pair started a new round of downward correction on Tuesday. Recall that in the last few weeks, traders are trying to start a new upward trend and fixed above the moving average line for the second time. However, so far, the bulls do not have enough strength to make the European currency significantly rise in price against the dollar. However, this conclusion may be false. The pair’s quotes may be gradually moving up at a low pace, and this is normal. One way or another, the upward trend continues at the moment. We also remind you that in our recent fundamental reviews, we concluded that the reasons for the growth of the euro currency and the fall of the dollar over the past 11 months lie solely in the factor of “changes in the ratio of the money supply of the European Union and the United States”. Simply put, there is much more cash in the United States, and money in various forms (for example, deposits, bank accounts). This was the reason for the fall of the US currency, as its supply on the market has grown banally. We looked at the monetary aggregates M0 and M1 and it turned out that in the United States, these indicators increased at least one and a half times in 2020, and in the European Union – a maximum of 10%. Thus, the conclusions are almost obvious, and we continue to expect information from US government circles regarding the new stimulus package initiated by Joe Biden. We still believe that now the US dollar still has some chances to rise slightly in price or at least avoid a new fall. But, as soon as it is announced that Congress has approved a new stimulus package, it will mean almost a verdict for the US currency. The new stimulus package should be announced by mid-March, in the next three weeks. Experts, all as one, are confident that the Democrats will be able to push the $ 1.9 trillion proposals through Congress. In particular, the budget resolution, which allows senators to approve Biden’s initiative by a simple majority, has already been adopted. However, from our point of view, the Democrats will not go into an open confrontation with the Republicans, as it was under Trump. Biden is a much softer president and he can’t help but realize that without taking into account the interests of the Republicans, he will simply make a huge number of enemies in the ranks of this party. As did Donald Trump, who simply spat on the interests of the Democrats, and therefore ran into two impeachments at once, approved by the lower house of Congress, which is dominated by representatives of the Democratic Party. Biden cannot fail to understand that his interests should be promoted and protected, but without spitting on the interests of other political forces. Most likely, Biden and his team will still try to agree with the Republicans on the size of the stimulus package. Probably, Biden will have to give in a little and the final package will be in the amount of a trillion and a half dollars. But in the end, it will still be approved. Thus, we are almost certain that the US currency will again come under market pressure in the coming weeks.

What can prevent this? This may be hindered by bad news from the European Union. So far, the European economy is showing a decent pace of recovery. And this is the most important thing. The ECB also continues to support the economy through various asset repurchase programs and the PEPP emergency program. According to the IMF, the ECB has conducted large-scale fiscal support for companies for at least 3 trillion euros. The eurozone’s GDP in the fourth quarter of 2020 was negative, but in general, the losses to the European economy compared to the fourth quarter of 2019 (when there was no pandemic yet) are estimated at 5%. For example, in the same UK, the loss is 7.8%. The economy has shrunk, however, the economy continues to recover as well without a huge cash injection, as in the United States. Here you should understand the difference between the approaches of the EU authorities and the US authorities. Not everyone, like the States, likes to live in debt. It is common for the US to increase its national debt. Of course, in words, politicians regularly express concerns about this, but in practice, no one is particularly worried. Remember, dear readers, when was the first time you heard about the notorious “American national debt”? Probably at least 10 years ago, or even earlier. And all this time, the national debt is growing and is already almost 30 trillion dollars. But the US economy, which collapsed by a record 31% in the second quarter of 2020, has now almost fully recovered. Of course, for further recovery, money is needed again, and this means that the national debt will grow again. But the results of such a policy are still available. In the European Union, the government cannot implement the same policy. First, such decisions require the approval of all 27 participating countries. Secondly, not all EU countries want to increase their debts and live according to the “American principle”. Thus, the EU allocates only the minimum necessary assistance, so the growth rate of the recovery is lower, but the public debt is lower. And in Europe, it is customary not only to accumulate debts but also to return them. For example, the budget for 2021-2027, which was adopted together with the recovery fund for 750 billion euros, assumes full repayment of debts over the next 30 years. Yes, the children of the current generation of Europeans will pay for the current debts that are needed to save the eurozone economy, however, they will be returned. In the United States, in 30 years, the national debt may be approaching the mark of $ 60 trillion. 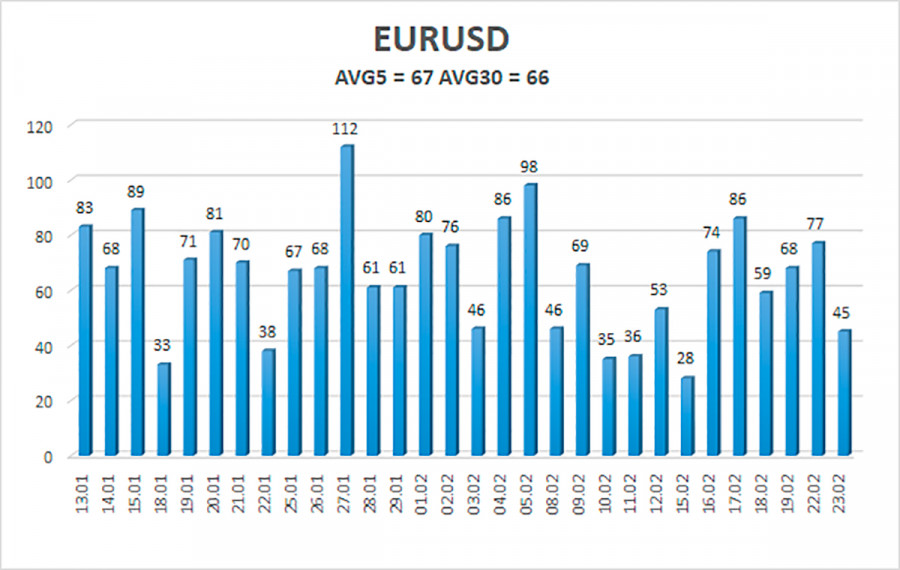 The volatility of the euro/dollar currency pair as of February 24 is 67 points and is characterized as “average”. Thus, we expect the pair to move today between the levels of 1.2082 and 1.2217. A reversal of the Heiken Ashi indicator to the top may signal the resumption of the upward movement.

The EUR/USD pair is being adjusted at this time. Thus, today it is recommended to open new long positions with the targets of 1,2207 and 1,2217 after the reversal of the Heiken Ashi indicator to the top. It is recommended to consider sell orders if the pair is fixed below the moving average, with targets of 1.2085 and 1.2024.

EUR/USD: the dollar remains under pressure, and the euro will enjoy...

Technical Analysis of BTC/USD for January 20, 2021

The Brothas of Harlem Capital Received $10 Million Investment From Apple

How to Create TikTok Videos the Algorithm Loves

How Coinbase listing on Nasdaq affected Bitcoin’s breaking of a new...

Lessons from MotivateMonday | How to write your best fundraising appeal...