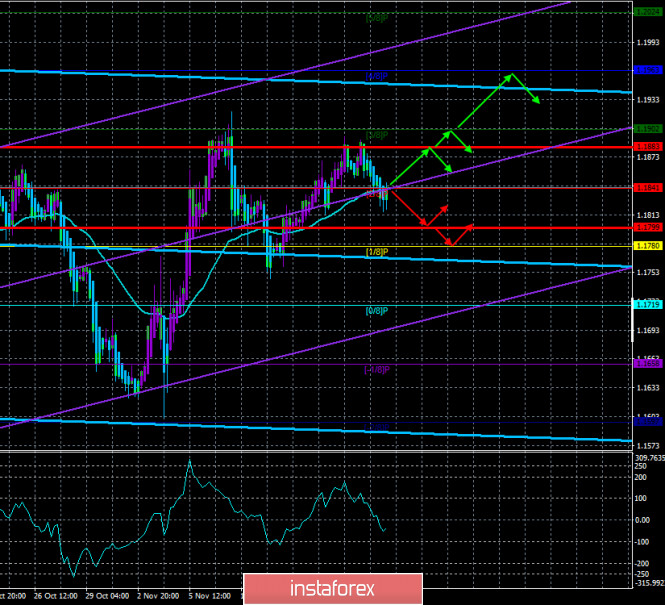 Overview of the EUR/USD pair. November 20. Donald Trump’s election defeat makes him America’s number one enemy for the next

The fourth trading day of the week for the EUR/USD pair was again fairly calm. The price was in a downward movement for most of the day and fixed below the moving average line. Thus, the most important thing we would like to note is: 1) the price again failed to overcome the level of 1.1900, which is the upper line of the side channel in which the pair has been trading for three months; 2) the short-term trend has again changed to a downward one, so now we can expect quotes to fall to the lower line of the side channel of 1.1700. Based on the fact that the pair again remained within the side channel, we can also draw the following conclusions: 1) traders still do not find any good reasons for new purchases of the euro; 2) traders do not see any reason for strong purchases of the US currency; 3) in the long term, the flat remains.

Meanwhile, some respected American publications are beginning to calculate the possible moves of Donald Trump for the remaining 60 days that he will spend in power. We have said many times before that Donald Trump is not one of those people who calmly accept defeat. The nature of the US leader is such that he will take revenge. Take revenge on everyone who prevented him from being re-elected for a second term. And this is not only our opinion, as many experts and many American publications believe. The first person who can be affected by “Trump’s revenge” is China. First, because the head of the White House did not manage to win the trade war with Beijing. Moreover, it is more likely that Beijing won the trade war with Washington. At least, data on imports and exports of the United States and China in recent years allow us to draw this conclusion. Second, because Trump blames China for the pandemic. There is a certain logic in his words since it was from the Chinese province of Wuhan that the virus broke out. At the same time, Trump constantly forgets that a virus has infected the whole world, and the United States remains in first place for the number infected and deaths from the “coronavirus” because: 1) America has a very large population (respectively, there are more diseases and deaths than, for example, in Germany); 2) it was he who did not take the “Chinese virus” seriously and continues to do so even now when most countries of the world are introducing the second “lockdown”. However, Trump does not care about his own mistakes, since, in his opinion, they do not exist. There is already information that Trump is preparing to impose new sanctions against Chinese officials, as well as to increase duties on imports from China.

Further, Trump’s anger may fall on all of America. Not as revenge for the lost election, but as spoiling of the life of the future president of the country, Joe Biden. Then, Trump will be able to claim that he is better than Biden over the next four years and he will be able to run for president for a second time and have a chance of winning if Biden’s results are unsatisfactory. According to the Daily Express, Trump can strike a blow to the country’s finances and state security, or even become the instigator of mass riots in the country to stay in power for as long as possible. All these suspicions are not unfounded. For example, Joe Biden has already stated that Trump’s refusal to admit defeat in the election and his refusal to peacefully transfer power will cost Americans thousands of lives since the current president does not want to share with the new government the most important information related to countering the “coronavirus” and vaccines. Also, Trump may unleash a new war with Iran and has already fired the Defense Secretary, who did not want to follow Trump’s orders. If in the near future Trump appoints “his” Secretary of Defense, this will mean that in the last two months the chances of a new military conflict in the world will sharply increase. Moreover, Trump can wreak havoc within the US itself, and “his” Secretary of Defense can support Trump’s actions with the army.

Many also pay attention to the fact that after the election defeat, Trump has already fired several high-ranking officials. We are talking about the same Secretary of Defense, the head of the Cyber Crime Directorate, Chairman of the Federal Energy Regulatory Commission, Deputy Administrator of the US Agency for International Development, and head of the National Nuclear Security Administration. Also, Trump is going to fire the country’s chief epidemiologist Anthony Fauci, FBI Director Christopher Wray, and CIA Director Gina Haspel. The first – constantly contradicts Trump on the issues of the pandemic, the second – refused to investigate the affairs of Trump’s political competitors, the third – delayed the publication of secret documents related to the 2016 election. Thus, everyone who contradicted Trump or did not follow his orders now found themselves “under distribution”. Also, the head of the special apparatus for the transfer of power refused to give Joe Biden and his team the $ 6.8 million required by law, which is allocated for the transition period (hiring new employees). In general, by all means, Trump is trying to prevent Biden from taking office and does not give him access to all state affairs that Biden should get in any case. After all, this is not the personal property of Trump. Potentially, Trump’s actions could have a very negative impact on the entire country. The most eloquent example of what Trump can do and what the consequences could be can be seen in the “Trump clone” (as Joe Biden called him) Boris Johnson. The British Prime Minister developed a law that directly violates previously established agreements with the European Union, and the UK’s reputation in the international arena immediately went down. Donald Trump can also reveal some state secrets or also contribute to reducing the international reputation of the United States. Moreover, inciting war with same Iran under certain conditions may allow Trump to impose a state of emergency and remain in the White House indefinitely.

It is easy to guess that all of the above will be negative factors for the US currency. While it is still inside the side channel and does not become cheaper in the long run. However, Trump’s last two months may fix that. 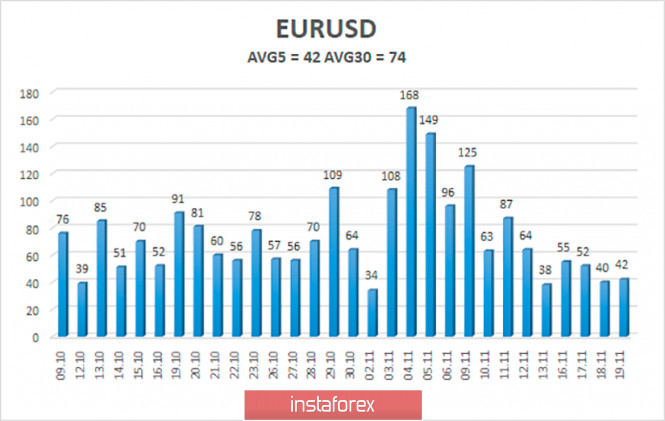 The volatility of the euro/dollar currency pair as of November 20 is 42 points and is characterized as “weak”. Thus, we expect the pair to move today between the levels of 1.1799 and 1.1883. A reversal of the Heiken Ashi indicator up may signal a new round of upward movement.

The EUR/USD pair is fixed below the moving average line. Thus, today it is recommended to consider short positions with targets of 1.1799 and 1.1780 as long as the Heiken Ashi indicator is directed down. It is recommended to consider buy orders if the pair is fixed above the moving average with the first targets of 1.1883 and 1.1902.

US market is waiting for support from the Fed

Overview of the EUR/USD pair. September 17. Donald Trump is going...