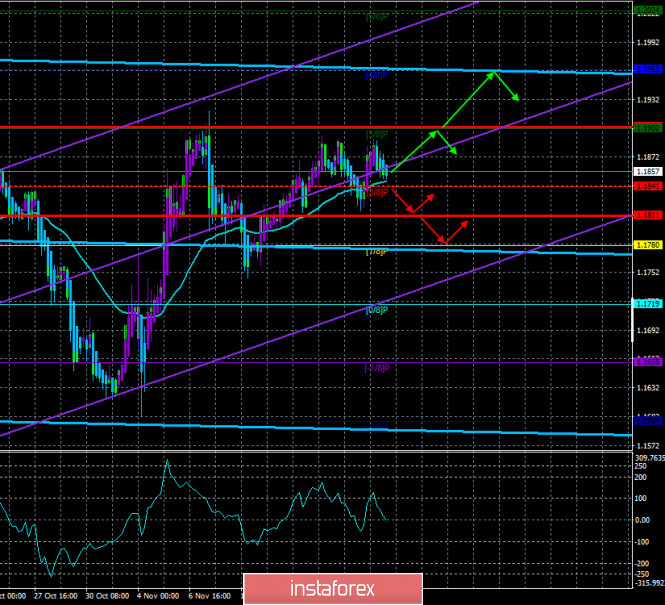 Overview of the EUR/USD pair. November 23. Trump continues to cling to every vote in the minimally lost states, hoping to

The last trading day of last week for the EUR/USD pair was held in the same boring trading as the whole week. During Friday, the pair made a sluggish attempt to resume the upward movement, however, it failed. The pair’s quotes again rolled back to the moving average line, but in global terms, they remained inside the side channel of 1.1700-1.1900, which we have been writing about for a couple of months. We write because the price stubbornly does not want to leave this channel and, thus, in the long term, a 200-point flat remains. At this time, the pair is trading near the upper line of this channel, so logically, the price should turn down in the near future and start moving to the lower border of the channel. Only the consolidation of quotes above the channel can indicate a serious intention of the bulls to form a new upward trend.

So, the elections have passed, and the number one topic in the United States is still the topic of elections. As paradoxical as it may sound. Traders are already tired of all this political circus and chaos that persists in America, however, it persists and it is very fun to watch from the sidelines. But market participants are in no hurry to work it out. What’s the point? Donald Trump has achieved a vote recount manually in the state of Georgia. The results were again not in favor of the current President: Joe Biden won by about 12,000 votes. This margin is considered minimal and Trump again demanded a recount, this time with the approval of signatures. I wonder if Trump intends to recount the votes until he wins? And what is the point if Biden’s gap from Trump is more than 70 in terms of “electoral votes”? In other words, you need to review the results in at least several states so that the election results are reversed. In the oratorical field, Donald Trump also does not give up. Through his favorite tool for communicating with Americans – the social network Twitter – Donald Trump said: “Why is Joe Biden rushing to form a Cabinet when my investigators found hundreds of thousands of fraudulent votes, enough to “flip” the results in at least four states, which in turn is more than enough to win the election?” According to Trump, “even the dead” participated in the election, and fraud reached “huge proportions”. On the other hand, this statement allowed us to understand that Trump will soon try to review the results in four states. Probably the most controversial. However, in most states, lawsuits filed by his staff were rejected by the courts. Still, nothing is stopping the Trump team from filing new lawsuits. As we said earlier, what does Donald Trump have to lose? He has 10 more weeks to try to change the situation in his favor. Moreover, the whole of America and the whole world is already used to the fact that the President deals more with his issues, and not with the issues of the country, which remains in first place in the world in the number of cases of infection with the “coronavirus” and deaths from it. By the way, Trump has not provided any evidence of fraud by the Democrats, which he spoke about a week ago.

Most experts agree that formally, Trump does have a chance of completely overturning the results. They are about the same as they were for winning the election. That is, minimal. Experts believe that Trump will try to block the results of the voting in several states, justifying this by saying that the election and vote counting was dishonest. Further, through the Republicans who control the states in which he lost, Trump will try to get the results reversed. If the results of the vote are canceled, the fate of the elections in a particular state will be decided by the electoral college, which will no longer be required to repeat the choice of the state’s residents, since the elections will be officially declared invalid. Well, then everything is simple. Either to beat Biden at the expense of the recount of electoral votes. Either achieve a draw and then the fate of the elections will be decided by the Congress and the Senate, but this is a different story.

But let’s digress a little from the elections and return to the European Union. Last week, Christine Lagarde made four appearances at various events. However, most of her speeches were not interesting to traders. In principle, given the fact that the euro/dollar pair has been trading with minimal volatility all week, it is obvious that there was no reaction to Lagarde’s speech. However, the head of the ECB still said a few interesting things. For example, Lagarde announced a major new stimulus package in December. Lagarde believes that the economy will again suffer greatly due to the growing number of diseases from COVID-2019, as well as due to “lockdowns” in many European countries. She called on the governments of all EU countries to allocate funds from the anti-crisis fund and not to delay these processes. Lagarde also said that the European Commission needs to agree as soon as possible on a seven-year budget and an economic recovery fund, which was blocked last week by Poland and Hungary. The ECB President also considers it good news to report on the creation of two working vaccines at once, but understands that vaccination of the population will take some time, so the epidemiological and economic situation is unlikely to change for the better in the coming months.

If the European Union’s economy shrinks at the end of 2020, this could be a serious pressure factor on the euro currency. Recall that the euro in a pair with the US dollar has been getting more expensive for 7-8 months. and any trend sooner or later ends. Of course, long-term trends can last for several years, if not more. However, if the European economy is experiencing more problems than the American one, this factor can change the leader and the outsider in places. We believe that since the spring, the US currency has become cheaper because it was its economy that suffered big problems in the second quarter when the epidemic became widespread around the world. Now, in the fourth quarter of 2020, it is the European economy that may suffer, but the American economy may not. In the US, the authorities did not introduce a “lockdown”, putting the economy at the top of the priority table, not health care. Of course, it is still completely unclear how the saga called “the election of Donald Trump” will end. The fundamental background from America may worsen again, and the dollar will get new grounds for falling. However, so far it looks like the euro may start to fall for a long time in the coming months. 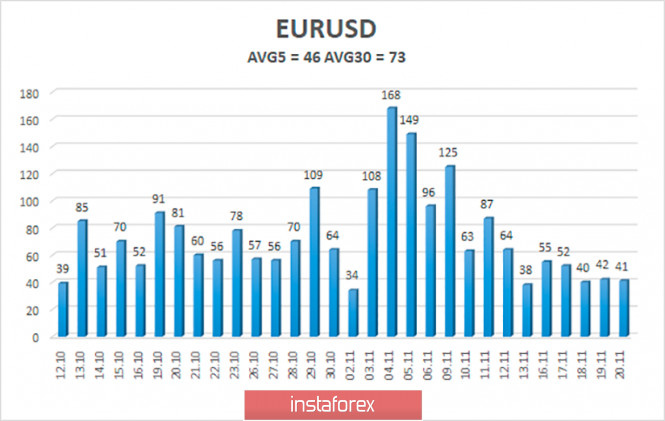 The volatility of the euro/dollar currency pair as of November 23 is 46 points and is characterized as “weak”. Thus, we expect the pair to move today between the levels of 1.1811 and 1.1903. A reversal of the Heiken Ashi indicator up may signal a new round of upward movement within the side channel of $1.17-$1.19.

LeBron James and CNN To Produce Documentary On The 1921 Race...

EUR/USD and GBP/USD: Bank of England might resort to negative rates....

These Fraternity Brothers Are Buying Back Their Neighborhood To Stop The...

Sherri Shepherd and HealthyWage Partner to Pay $10,000 to Dieters Achieving...

Trading plan for the EUR/USD pair on October 9. Persistent rise...