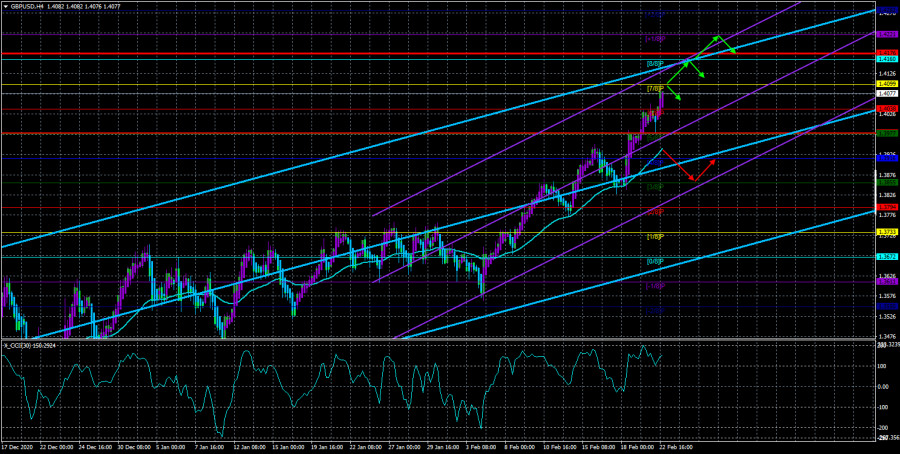 Overview of the GBP/USD pair. February 23. The British pound ignores many factors, but does not ignore the global ones and

The British pound has started a new trading week, guess where? That’s right, all from the same upward movement. It can not be called completely recoilless. From time to time, the pound/dollar pair is adjusted in the most short-term plan. This is in the long term, we have not seen a correction for five months. Nevertheless, in general, the pound sterling continues the same upward movement as the euro currency. In the next article on the euro, we have already figured out why the upward movement has been maintained for 11 months and how much longer it can continue, as well as identify the very likely reasons for the past and future fall of the US currency. In this article, we will try to understand the question of why the British pound is trading completely differently from the euro currency. It is becoming more expensive at times, although there are much fewer objective reasons for this than the EU currency. So, let’s go.

Let’s start with the fact that the global fundamental reasons for the fall of the US dollar paired with the pound are most likely the same as those of the euro currency. At first (the movement began in March last year), the dollar fell as part of a pullback from the most serious growth in the same March. Then, it fell due to the strongest decline in the American economy in the second quarter (by a record 31%), because of the huge cash injections into the American economy to save it from the utter devastation after the crisis. However, against the background of these events (which from the very beginning were not even obvious), we constantly forget that in the UK, everything is not also good. First, the country spent the past year preparing for Brexit and only by the end of the year was able to conclude a trade agreement with the European Union. Secondly, its economy, even with a trade agreement, will shrink by an additional 2.5% of GDP due to Brexit. Third, in the UK, there were two “lockdowns” in the winter, while in the European Union there was only one, and in the States – there was no lockdown at all. Fourth, while the US lost 31% of GDP in the second quarter and the EU lost 12%, the UK lost about 20%, which is more than the EU. Thus, by all logic, the British pound could also become cheaper against the dollar, however, it had to do it much less intensively than the euro currency. In reality, we see an opposite picture. The pound sterling continues to rise in price without stopping for the last five months, although there is no particularly positive news from the Foggy Albion. The latest reports on GDP, inflation, and business activity in the service sector have pleased traders. But the pound has been rising in price for five months, and the reports came out last week. The British economy did not contract in the fourth quarter of 2020 in contrast to the European one, but overall it lost 7.8% year-on-year compared to the fourth quarter of 2019, while the European one lost only 2.5%. Thus, again, if we compare the strength of the economies and their pace of recovery after the crisis, it turns out that the US feels much better. The “coronavirus” factor has not had any effect on the foreign exchange market for a long time, but it is in the UK that new strains are found with enviable regularity. It is in the UK that the Bank of England is “walking on a knife’s edge” in the issue of lowering the key rate. It is in the UK that the unemployment rate may jump in the coming months, as government support programs end in March. And if new ones are approved, this again means pouring money into the economy. So, let’s now consider the changes in the monetary aggregates M0 for the UK and the US.

In the United States, as we have already figured out, the M0 money supply jumped up in 2020 and increased in volume by one and a half times. Thus, it is not at all surprising why the US currency rate has been declining all this time. But what about the UK?

In the Kingdom, the M0 money supply also jumped up in 2020, increasing by about 10%-15%. From a value of 82,000 million pounds to a value of 92,000. Thus, the increase in the money supply is comparable to the European Union. This means that it is much smaller in volume than in the United States. Why did the pound rise much more strongly against the dollar than the euro? We can only explain this by a “speculative” factor. From our point of view, the pound sterling is now about the same as bitcoin. They buy it because it is constantly growing, and the bears are not even able to form a normal correction right now. Thus, the pound is now somewhat of a “win-win” option. It does not need to be analyzed very much (especially for those who work for long-term employees). It just grows in the long run and that’s it. Thus, in general, we would say that 70% of the growth of the pound is to blame for the same factors as the growth of the euro currency, and 30% of the growth of the pound/dollar pair depends on the “speculative” factor. Thus, we believe that the prospects for the pound again depend solely on how much the US economy will be pumped with dollars in 2021. If everything goes according to Joe Biden’s plan, then there is no doubt that the dollar will continue to fall. Of course, sooner or later the upward movement will end. A global correction will begin, within which the pound may lose 10-12 cents (the total growth since last March is already 26 cents), but this will be later. Well, in the short term, the GBP/USD pair continues to rise in price and continues to be located above the moving average line. Thus, as long as the Heiken Ashi indicator is directed upwards, you can keep open buy orders.

The average volatility of the GBP/USD pair is currently 99 points per day. For the pound/dollar pair, this value is “average”. On Tuesday, February 23, thus, we expect movement within the channel, limited by the levels of 1.3978 and 1.4176. A reversal of the Heiken Ashi indicator downwards signals a round of corrective movement.

Overview of the GBP/USD pair. March 8. A new conflict has broken out between the European Union and the United Kingdom over

Overview of the EUR/USD pair. March 8. The US Senate has approved Joe Biden’s $ 1.9 trillion stimulus package

Hot forecast and trading signals for EUR/USD on October 2. COT...

Overview of the EUR/USD pair. March 5. Hype with the yield...

BTC analysis for February 19,.2021 – Overbought condiiton on intraday and...

GBP/USD: plan for the European session on November 24. COT reports....

Becerra Has Long Backed Single-Payer. That Doesn’t Mean It Will Happen...

Technical Analysis of GBP/USD for March 4, 2021