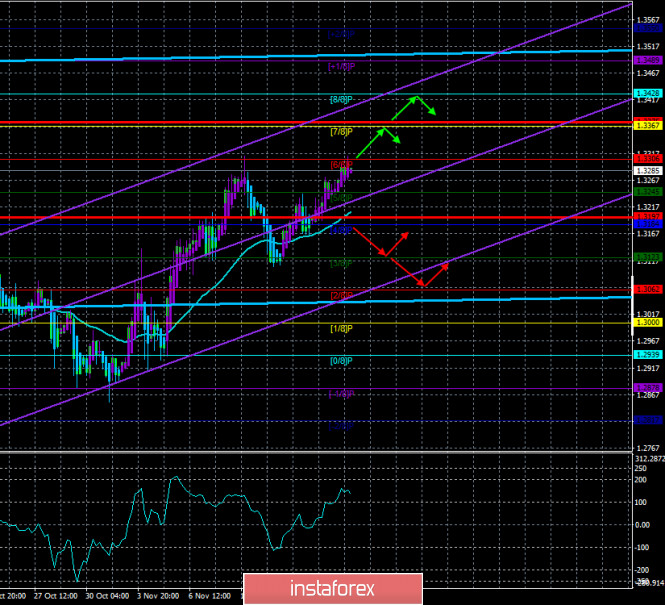 Overview of the GBP/USD pair. November 19. Negotiations on Brexit: there is no good news. The most important trump card of

The British pound sterling paired with the US dollar continued to rise in price for most of Wednesday, November 18, and eventually worked out the Murray level of “6/8”-1.3306, which is the previous local maximum. Thus, the upward trend in the pound sterling remains, although there is still no reason for this. We are referring to real fundamentals, not the hopes and optimism of traders regarding a trade deal between the UK and the EU. Thus, contrary to the fundamental background and common sense, the British pound may continue to rise in price in the coming days and even weeks. We have repeatedly said that any fundamental hypothesis must be confirmed by technical signals. So far, this is not the case. Thus, it is still recommended to trade for an increase.

Meanwhile, there is still no positive news from the Brexit trade deal negotiations. The groups of Michel Barnier and David Frost continue to negotiate, but do not share any important information with the markets. Moreover, Michel Barnier will not report to EU ambassadors on progress in negotiations until the EU summit on Thursday. He usually did this on Wednesdays, and on Fridays, he held a briefing where he answered questions from journalists. Formally, the summit should focus on other issues, not Brexit. However, the trade deal and progress in the negotiations will necessarily be discussed by the heads of the European Union. In the meantime, the longer the negotiations continue, the less likely it is to reach a final agreement. Recall that it is important not just to reach an agreement, but also to have time to ratify this agreement before December 31, 2020. That is, to make sure that the British Parliament and the European Parliament approve this document. But all this takes a lot of time. Moreover, if one of the British parties or at least one of the EU countries is against the current version of the agreement, it can be blocked. You will need more time to make adjustments and to vote for the document again. And on the main issues between the parties, there are differences and it is unclear how much more time will be required to completely level them. Well, we have already talked about the prospects of the British economy for the next year many times. In short, they are extremely vague.

And with all this, the pound sterling continues to rise in price. The UK has a huge number of problems right now. Starting from epidemiological, ending with economic. And only the rather ambiguous situation in America allows the pound to stay afloat in the last six months. We understand that one currency cannot become cheaper or more expensive all the time. However, for any currency, a negative fundamental background may persist for a long time. And this currency is now the pound sterling. The US dollar has not had many problems in the past four years. Yes, President Trump did everything to reduce the demand for the US currency, and the currency itself became cheaper. He has repeatedly stated that he needs a “cheap” dollar to make it easier to service the huge US government debt and get more profit from exports. However, the economy has been growing for most of Trump’s term, the unemployment rate has remained at an all-time low, the labor market has been strong, and the stock market has consistently set growth records. But in the UK, the last four years can be called the “Brexit era”, which can not but harm the country’s economy and the value of its national currency. So slowly but surely, the pound has been sinking all this time. In any case, the next year will be a difficult one for the British economy. Experts have long calculated and reported that whether there is a deal with the EU or not, the British economy will still lose billions of pounds due to the “divorce” with the European Union. The only question is how serious the losses will be. Thus, the exclusively British fundamental background should continue to put pressure on the pound.

If it were not for the American fundamental background and separately Donald Trump, the pound would most likely continue to fall at this time. However, the last six months are clearly under the auspices of the weakening of the US currency. First, there were “four types of crises” in the United States: epidemiological, social, economic, and political. They somehow managed to resolve economic and social problems. But the epidemiological one has worsened, and a possible constitutional one has been added to the political one. Traders understand that Trump will not just leave his post. And if he does, he may end up doing things that Biden and his team will have to deal with for years to come. Just before 2024, when Donald Trump wants to run for President again. The most interesting thing is that it is in the interests of Trump to maximize the deterioration of the situation in the United States. The worse the legacy Trump leaves behind, the worse the results will be for Joe Biden and Kamala Harris. Therefore, in the next four years, Trump can already criticize the new President and constantly point out his mistakes. That is what Joe Biden has been doing over the past year. Well, for America and the US dollar, this is the worst-case scenario. When the presidents (current and future) will continue to fight with each other and fight for power.

Thus, so far, the technical picture predicts the continued strengthening of the UK currency. And if so, it is recommended to trade for an increase. None of the linear regression channels are directed down. The price in the last two months likes to overcome the moving average, but each time it inevitably returns to the area above it. Thus, the upward trend continues. But, from our point of view, the pound can still fall at any moment. It looks too overbought in recent times. You need to be prepared for this option. 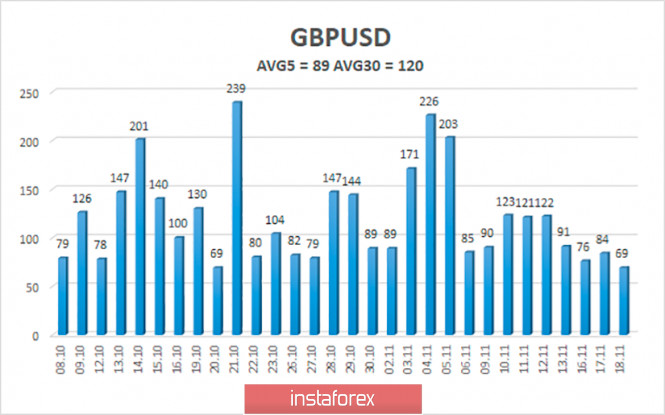 The average volatility of the GBP/USD pair is currently 89 points per day. For the pound/dollar pair, this value is “average”. On Thursday, November 19, therefore, we expect movement inside the channel, limited by the levels of 1.3197 and 1.3375. A reversal of the Heiken Ashi indicator downwards signals a new round of corrective movement.

Top 6 Most Frequently Asked Questions About Becoming a Tax Preparer

A Call That Saved My Baby’s Life—And My Own—During The Covid-19...

Oil companies are on verge of extinction

EURCAD is approaching ascending trendline support, potential for a bounce!

Forecast and trading signals for GBP/USD on January 15. COT report....