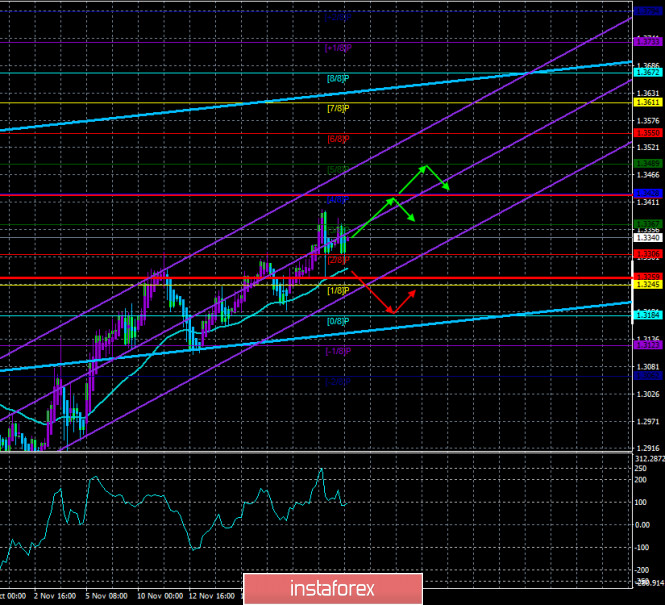 Overview of the GBP/USD pair. November 25. Negotiations on a trade deal have resumed.

The British currency in the last few days has also been trading not quite unambiguously. On the one hand, there is a pronounced upward trend. Both linear regression channels are directed upwards, and the price is located above the moving average line. However, the upward movement does not continue, and the price is corrected for the second day in a row. Traders have no idea how to react to the fundamental background right now. No news shows any changes in the negotiation process between Brussels and London. As a result, the British pound, which has been happy in recent weeks and has risen in price solely on expectations of an early signing of a trade agreement, is now in a stupor. It can’t grow for another couple of months if, for example, Britain and the EU continue to negotiate so much. Boris Johnson very much damaged his reputation last year, when he said that “it would be better to die in a ditch, that he would ask the European Union to postpone Brexit to a later date”. However, the UK Parliament blocked another “wonderful” initiative of Johnson and the Prime Minister had to ask for a delay from Brussels. Boris Johnson did not draw any conclusions from this lesson and in September this year set a deadline for negotiations on a trade deal – October 15. We look at the calendar and find out that today is November 25. There are 37 days left until the end of the “transition period”, the extension of which was blocked by Johnson, and negotiations are still ongoing. Thus, it seems that we were right when we said that the negotiations will continue for as long as necessary, and all Boris Johnson’s threats to curtail the negotiation process are nothing more than an attempt to put pressure on the European Union. It is far more disadvantageous for Johnson than for the EU to end Brexit without a deal.

As a result, the negotiations resumed in video mode. Last week, one of the members of the European delegation fell ill with “coronavirus”, so the negotiations were urgently interrupted and curtailed. It is not reported who else was infected with COVID-2019. Michel Barnier, who has been honest with reporters throughout the negotiation process, said on Monday that “big differences” remain between the parties, but both sides continue to look for ways to resolve them. However, we heard the same thing a month ago. Even issues where there are “big differences” remain the same. This is a question of fishing in British waters, a question of fair competition and support for companies by states, as well as a question of resolving disputes between Brussels and London. Thus, it is not clear at all what has changed over the past few weeks, after the “intensification of negotiations”?

Meanwhile, Boris Johnson announced the signing of a trade deal with Canada. However, the deal is only temporary and defines trade relations between the countries after Brexit. The total amount of the transaction is $ 27 billion, which is how much the goods and services exchanged between the countries are worth. It is noted that 98% of goods will remain zero tariffs, but in 2021, new trade negotiations will begin to sign a larger agreement with agreements in other areas. So far, London has managed to sign trade agreements with Canada and Japan. With Canada – it is temporary, with Japan – for 1.5 billion dollars.

One of the few people in the UK who understands the horror of the current EU trade deal situation is Bank of England Governor Andrew Bailey. Bailey warned that the long-term consequences for the British economy from the lack of a trade deal with the EU would be much “more expensive” than the consequences of the COVID-2019 pandemic. Bailey said that failure to reach an agreement before the end of the “transition period” would cause disruption to international trade and damage the good relations between Brussels and London needed to build future economic relations. Andrew Bailey also warned that the consequences of the second “lockdown” in the Foggy Albion will not be “short-term”. At the same time, Chancellor of the Exchequer Rishi Sunak warns Boris Johnson against striking a trade deal “at any cost”. Sunak believes that Britain should not sign an agreement that does not suit Britain itself, and insists that it is COVID-2019 that poses the greatest threat to the British economy, and not a “No Deal” scenario.

We believe that the British economy will continue to experience serious problems in 2021 in any case. The only difference is whether there will be a trade deal or not. If there is, the negative impact on the economy will be weaker. Thus, no matter how expensive the pound becomes at the end of 2020, the long-term trend for it remains frankly downward. Only the states or traders themselves can help the British currency. We have already talked about traders. Even if all the news is negative for the pound, but traders will buy this currency, the pound will become more expensive, whatever the fundamental background. As for the United States, the problems in this country in 2020 (“four types of crises”, which we have repeatedly written about) helped both the euro and the pound a lot. But will these problems persist with Joe Biden coming to power? The US economy may continue to recover in the fourth quarter, in contrast to the British and European economies, which are now closed for “lockdowns”. Therefore, from our point of view, the US dollar already has an advantage in the coming months. Then everything will depend on the “peaceful” transfer of power by Donald Trump to Joe Biden, and the first steps of Joe Biden as President. We still believe that the British currency is heavily overbought and should have been heading down for a long time. However, without technical confirmation of this hypothesis, we do not recommend selling the pound and buying the dollar. 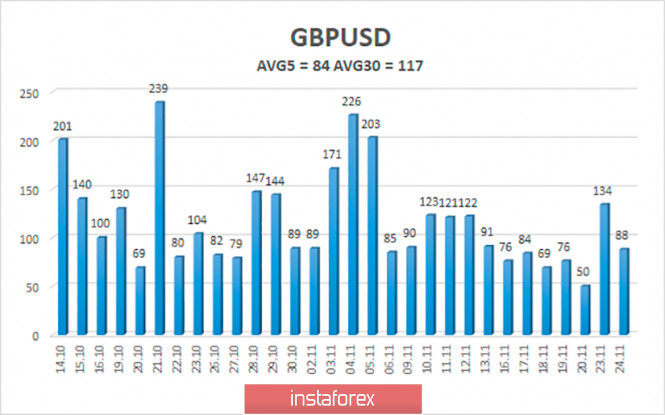 The average volatility of the GBP/USD pair is currently 84 points per day. For the pound/dollar pair, this value is “average”. On Wednesday, November 25, thus, we expect movement inside the channel, limited by the levels of 1.3259 and 1.3427. The reversal of the Heiken Ashi indicator up signals the resumption of the upward movement.

Nancy Pelosi Says The House Will Move To Impeach Trump If...

Simplified wave analysis and forecast for EUR/USD and USD/JPY on August...

Overview of the EUR/USD pair. September 16. Jerome Powell may again...

Analysis for EUR/USD on September 17. Hardship of the Fed is...

Just one week after completing the Acorda Therapeutics stock split, the...

EURUSD: The minutes of the ECB’s December meeting indicated a possible...

The price of oil recovers after yesterday’s heavy losses. Mirage or...