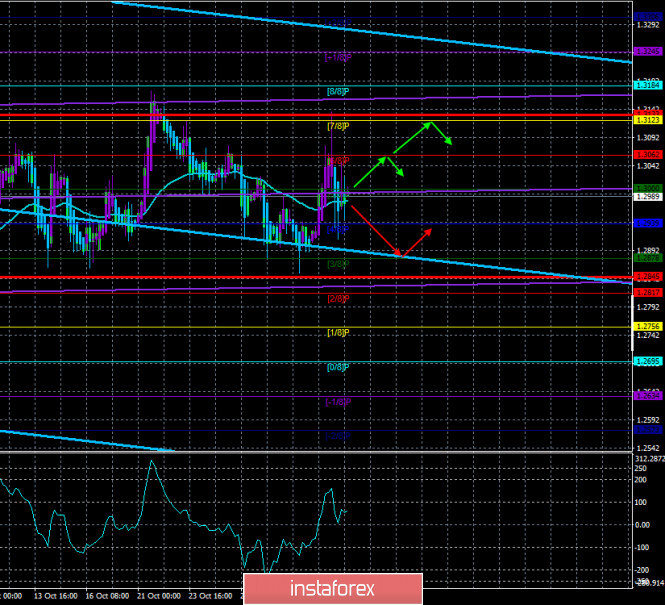 Overview of the GBP/USD pair. November 5. 11 days before the deadline for negotiating a trade deal. Some interesting aspects

The British pound sterling paired with the US currency also spends the third trading day of the week in a “storm”. The movements of the two main pairs are almost identical. And this says only one thing: the US dollar remains the catalyst for the movement. It is its market participants who sell and buy, which leads to the movements of both currency pairs. As in the case of the European currency, it makes no sense to try to predict the future movement of the pair even one day ahead. We believe that the markets should first calm down, and only after that, it will be possible to return to trading. And the “storm” should end only when all the votes are fully counted and the winner is announced. However, even in this case, the US dollar may continue to “storm”, as well as the whole of America. The fact is that in many American cities, opponents of Donald Trump took to the streets, who are rallying against the current President, who has already declared himself the winner. So, skirmishes with supporters of the Democrats, as well as with the police, are not excluded, not to mention simple hooliganism and pogroms, as was the case during the months of riots related to racist scandals in the United States. Thus, neither the further movement of the pair nor further events in the US can be predicted now. Therefore, first of all, we recommend that all market participants conduct as careful trading as possible.

Meanwhile, market participants for the pound/dollar pair are interested not only in the US elections. The fate of the UK and the pound sterling is also being decided. We are talking, of course, about the negotiations on a trade agreement between London and Brussels, which have been going on continuously for almost 2 weeks. And now we are talking only about the next round of negotiations. The parties agreed a couple of weeks ago that the negotiations need to be intensified, which was done. However, the markets already want to get at least some information about the progress of the negotiations. After all, this will be the last round. At least in the negotiations in 2020. The next deadline set by Boris Johnson expires on November 15. Thus, there is only a little time left. If at the beginning of the current round of negotiations, the markets received unverified information that the parties were allegedly able to agree on key issues and are “close to concluding a deal”, now representatives of the European Commission say that there are still differences between the parties on key issues. In general, the situation here is the same as with the US elections: you need to wait for official information, statements by Michel Barnier, and David Frost.

For now, we will return to the most pressing topic – the elections in America. And we would like to note right away that in fact, the current elections are not even elections. This is the will of the people. We have repeatedly used the term “electoral vote”. It’s time to clearly understand what this voice is, who has it, and what this “someone” can do. Each US state has a certain number of these “electoral votes”. These are electoral colleges that will elect the President of the United States. According to the original idea, the electoral college, which in each state consists of a different number, should take into account the opinion of the residents of the state and vote unanimously for the candidate chosen by the state. In other words, the electoral college must give all its votes to the candidate who won the popular vote. And this board vote will take place in 41 days (December 14). That is, it is impossible to say with 100% probability that a candidate will win after the final count of all votes in all states because the President will be chosen not by Americans, but by electors. And the most interesting thing: electors are not required by law to cast their votes to the candidate who was chosen by the residents of the state. In other words, there is no single article in US law that would force electors to vote for the candidate chosen by the people. However, this behavior of “disillusioned electors” (as they call those electors who do not want to vote for their candidate) is usually suppressed by the governments of each state. The options may be different. Votes given to the “wrong” candidate can be canceled, and the electors themselves can be fined. However, the fact remains that electors can vote as they please. And when the gap between candidates is large enough, then it doesn’t make any sense how many electors decide to be “disappointed”. This was the case in 2016 when 10 electors out of 538 tried to cast their votes for the “wrong” candidate. Seven managed to do it. But if the gap between the candidates is not large, then these votes may even play a decisive role.

Well, the “cherry on the cake” is a postal vote. Figuratively speaking, any American could send their newsletter by mail on November 3. A letter will be sent to the polling station on November 6. And by law, this American’s vote must be counted. This year, about 60 million Americans voted by mail. Some did it in advance, some did not. Thus, now there are no enhanced counting of postal ballots, and the election services are just waiting for all the missing letters. And they can wait for several days. Therefore, the results of the vote in America may have to wait a few more days, during which Donald Trump will continue to insist on the falsification of the Democrats’ “postal” vote. Well, the euro/dollar pair may continue to remain in limbo for a few more days. 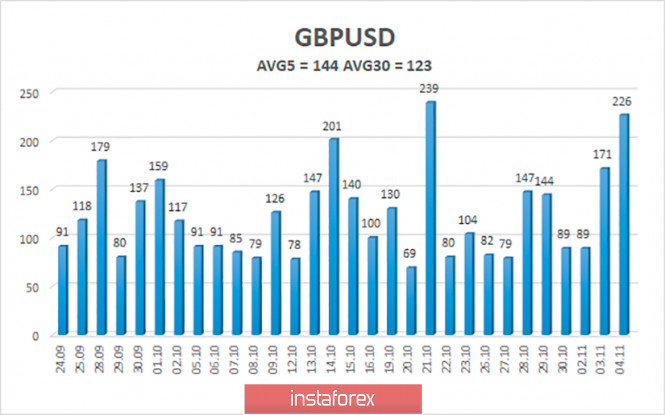 The average volatility of the GBP/USD pair is currently 144 points per day. For the pound/dollar pair, this value is “high”. On Thursday, November 5, therefore, we expect movement inside the channel, limited by the levels of 1.2845 and 1.3133. The reversal of the Heiken Ashi indicator up may signal a possible turn upward movement.

Forecast and trading signals for GBP/USD on January 20. COT report. Analysis of Tuesday. Recommendations for Wednesday

Forecast and trading signals for EUR/USD on January 20. COT report. Analysis of Tuesday. Recommendations for Wednesday

Ethereum soared 30% and followed by another pullback

A Guide to bbcon 2020 for Higher Ed Professionals

Gold exhibits growth amid results of the recent US elections

Chrissy Teigen Speaks of Time Being Followed and Harassed By Racists...

Learn How To Close That Deals And Make The Sale With...

Brief trading recommendations for GBP/USD on 10/22/20