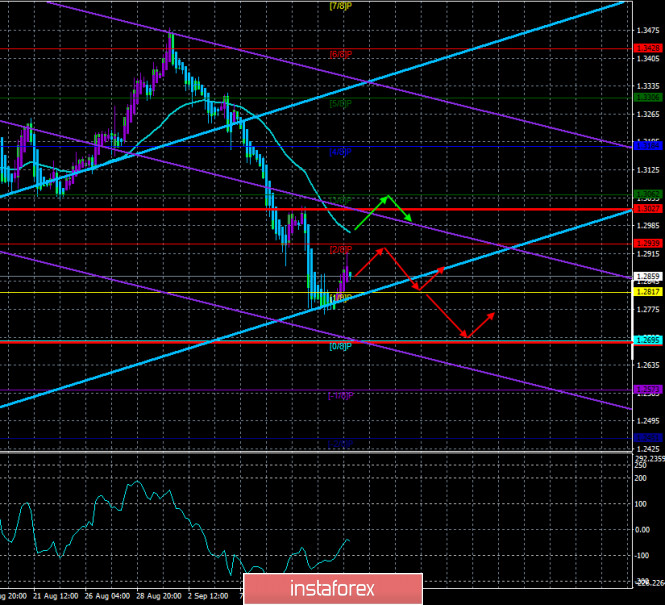 Overview of the GBP/USD pair. September 15. Boris Johnson is one against all.

On the first trading day of the week, the British pound began to correct after a 700-point fall, which began on September 1. The Heiken Ashi indicator turned upward, which was the beginning of a corrective movement towards the moving average line. At the same time, the trend at this time remains frankly downward, and the technical picture may look very unconventional in the near future. Let’s start with the fact that after a 700-point drop, an upward correction of 200-300 points will be absolutely normal. However, 200-300 points up mean that the price will be fixed above the moving average, which will mean a change in the upward trend. At the same time, if this correction takes place at all, then the main downward movement will resume after it, which can continue for as long as necessary, given the current fundamental background from the UK. And most importantly, the fundamental background from the UK. If it remains the same as in the last two weeks, then nothing good can be expected for the pound in the near future. Thus, if tomorrow we receive new data on the “Johnson bill” or on the complete failure of negotiations with the European Union, the pound may resume falling on the same day without any correction by 200-300 points. If Britain gives a small respite to the pound/dollar pair, the correction may just have time to complete in time.

The most important and significant factor for the British currency at this time is the fundamental background. The euro/dollar pair clearly shows that the US dollar is not getting more expensive. Thus, it is the latest events related to the UK that are the reasons for another fall in the British currency, which in the last six months has shown signs of life thanks to the “four crises” in the United States. In fact, over the past few months, traders have not reacted even to the fact that there will be no free trade agreement between the European Union and America with a 99.9% probability. We have repeatedly said that London operates on the principle of “either such an agreement as we want or none”. At the same time, as almost all experts, economists, and political scientists note, it is London that first needs a trade agreement, and not Brussels. Some experts believe that Boris Johnson is bluffing in this way to force Brussels to be more accommodating in negotiations. If this is true, then the poker player from Johnson is very weak, since the European Union “did not fall for” any of Johnson’s bluffs. Further, all as one, experts say that without a trade agreement with the European Union, the British economy will be dealt with another powerful blow. If this strike had been delivered at a normal and quiet time, it could have been called a “tolerable threat”. However, the economy will receive this blow after four years of ordeal related to Brexit, after the “coronavirus crisis”, during which the economy has already lost 20% in the second quarter. Thus, it is very difficult to understand what goals are actually pursued by the British Prime Minister, who now has full power in the country.

In the near future, it will become known how the parliament voted for the controversial bill on the “internal market of Great Britain”, which directly violates the agreement with the European Union and any principles of international law. Only conservatives can vote for this bill, as the opposition has harshly criticized this desire of London to violate agreements with the European Union. Five former Prime Ministers of Great Britain immediately criticized the bill. “The adoption of this act by the Parliament and the intention to violate an international agreement is the last option that can be considered. This should be a solution for a completely extreme case,” said David Cameron, during whose rule the referendum on leaving the EU was held. Theresa May, Tony Blair, Gordon Brown and John Major have previously harshly criticised the “Johnson act”. All of them said that violating the principles of international law would undermine confidence in the UK and make it a country with which it is undesirable to conclude any agreements. We absolutely agree with this judgment. Most likely, if the high-profile bill is passed, then any negotiations with the UK after that will be conducted in an extremely strict manner with the requirement to provide many guarantees of the agreement’s implementation. In any case, any future negotiations in London will be very difficult. Johnson himself believes the following: “If we do not agree to the terms of the European Union, it will establish a full-fledged customs border in the Irish sea, resorting to a radical interpretation of the protocol on Northern Ireland. We are informed that the EU will not only impose tariffs on goods traveling to Northern Ireland from the UK, but may also stop food supplies along this route.” The Prime Minister of Great Britain says that the European Union can stop the transport of food from the UK to Northern Ireland, arranging a “food blockade”. Johnson fears that such actions will “destroy the economic and territorial integrity of the UK” and “seriously threaten peace and stability in Northern Ireland”. Johnson may even be right, however, there is a reasonable question: why did you have to agree to the protocol on Northern Ireland at all, if it does not suit London so much? And here we are forced to return once again to what Johnson’s main goal was – to “separate” the Kingdom and the EU. It doesn’t matter in what ways and with what consequences. Basically, he continues to just walk along the path, which glows red lights in complete darkness. Only the blind can’t see it. Boris Johnson will continue to do everything just to leave the EU. In general, the United Kingdom, after one of the most high-profile processes of the 21st century (Brexit), can become a country with undermined confidence in the international arena and with an economy in deep crisis. We can only hope that the British Parliament will refuse to vote “for” the “Johnson bill”. Fortunately for Britain, there are still politicians in the Conservative Party who are not ready to blindly follow the Prime Minister, who is leading the country at full speed to international scandal and shame. But more recently, Boris Johnson criticized the Chinese authorities for violating the agreements on Hong Kong, depriving the city of autonomous status with a new bill “on national security”. As practice shows, Johnson himself calmly violates any agreements. 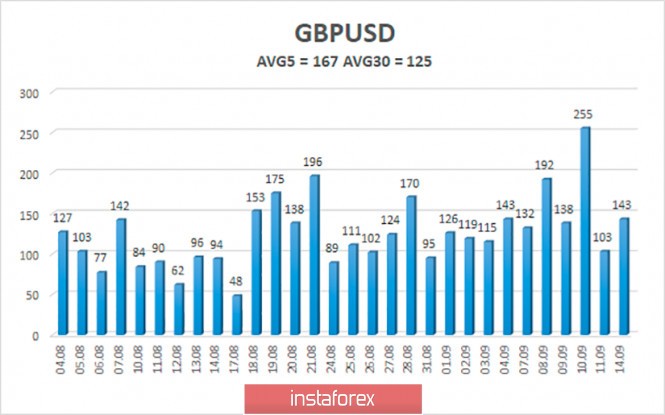 The average volatility of the GBP/USD pair is currently 167 points per day. For the pound/dollar pair, this value is “high”. On Tuesday, September 15, therefore, we expect movement inside the channel, limited by the levels of 1.2693 and 1.3027. The reversal of the Heiken Ashi indicator downwards signals the end of the round of upward correction within the downward trend.

The GBP/USD pair has started a correction on the 4-hour timeframe, which may be very short. Thus, today it is recommended to open short positions with targets of 1.2817 and 1.2695 as soon as the Heiken Ashi indicator turns downward. It is recommended to trade the pair for an increase with targets of 1.3062 and 1.3184 if the price returns to the area above the moving average line.

Simplified wave analysis and forecast for EUR/USD and USD/JPY on August...

Technical Analysis of BTC/USD for October 9, 2020

5 Reasons Not to Blame Yourself for Past Financial Mistakes

Weaker data from the University of Michigan can only support the...