On the chart of the Australian dollar since March of this year, an upward wave is developing, which sets the trend. The scale of the movement already exceeds the level of the daily time frame. Quotes are now in the area of the reversal zone, forming a correction. It has the shape of a shifting plane and is nearing completion.

Today in the first half of the day, a general downward movement is expected, until the full completion of the entire corrective wave. The probable site of the completion of the design acts as support. Then you should wait for a reversal and the beginning of price growth.

Selling the Australian dollar today can be very risky. We recommend that you focus on searching for reversal signals to buy the instrument.

The direction of the short-term trend of the cross is set by the downward wave from June 8. In its structure, the middle part (B) is nearing completion. In the last 2 weeks, the quotes are located in the area of the resistance zone of a large TF. Since the end of July, a reversal pattern has been formed on the chart.

In the coming trading sessions, the general downward course of the cross movement is expected. A short-term price rise is not excluded in the European session. The active phase of the decline can be expected in the US session.

In the pair’s market, trading is risky today. Transactions are only possible within the session with a reduced lot. The priority is to sell the tool. 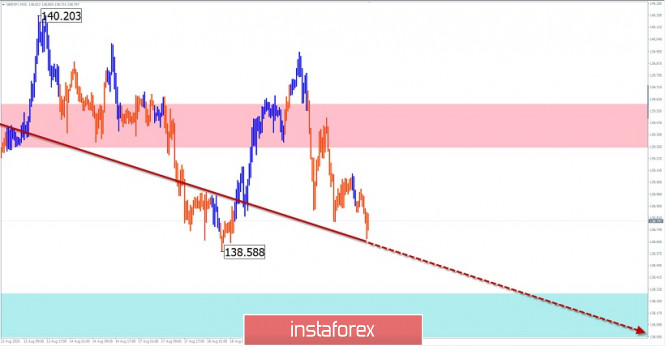 Explanation: In the simplified wave analysis (UVA), waves consist of 3 parts (A-B-C). The last incomplete wave is analyzed. The solid background of arrows shows the formed structure, and the dotted ones show the expected movements.

Note: The wave algorithm does not take into account the duration of the tool movements in time!

Trading plan for the EUR/USD pair on October 21. Continued rise...

Truckers Plan To Strike In Bid To Urge Biden To Avoid...

Mo’Nique Would Like Tyler Perry to Apologize in Public After Seeing...

Detroit Mom Celebrates Historic Inauguration with ‘I Could Be Next’ Shirts...

Meet The 10-Year-Old Who Converted A School Bus Into A Food...