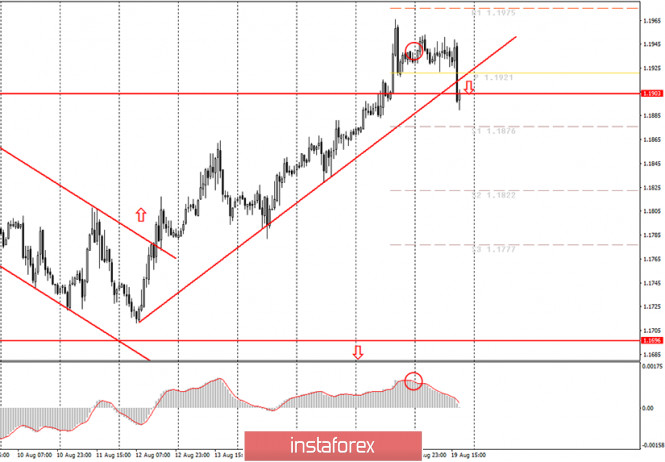 On Wednesday, August 19, the EUR/USD pair was making a correction for most of the day after the spike on Tuesday. The MACD indicator turned down in the evening on August 18 and has not given new buy signals since then. Thus, it was a bad idea for novice traders to open long positions during the day. Later in the trading day, the currency pair slumped sharply and broke the upward trend line. In essence, it means that the uptrend is over and the pair is about to reverse downwards. However, we would not recommend making hasty conclusions ahead of time. First, the trend line was crossed almost in the evening. Second, in a few hours, the minutes of the last Fed meeting will be published, which means that the market could give a strong response. In general, if the trend has reversed downwards, then nothing will change by tomorrow morning. If this breakdown is fake, then tomorrow morning it will become clear.

From a fundamental point of view, there was little news for the EUR/USD pair today. Actually, the only report on the eurozone’s inflation for July was posted which disappointed traders. The consumer price index is one of the crucial indicators of the economic health. Central banks usually view a CPI as the barometer when fine-tuning the parameters of monetary policy. However, in times of global jitters which are happening nowadays, it is perfectly logical to expect that inflation will not be “quiet”. It can either accelerate sharply (often in developing countries), or, on the contrary, fall sharply (typical for advanced economies). Thus, the drop in inflation to 0.4% in annual terms is not surprising at all. Core inflation (excluding changes in food and energy prices) amounted to 1.2% y / y in July. It is clearly seen from the chart of the currency pair that EUR/USD was not making sharp swings up and down movements at that time. Thus, the market neglected the report.

On August 20, Thursday, there will be few macroeconomic publications again. Novice traders can turn their attention only to the report on claims for unemployment benefits in the United States, the total number of which may drop to 15 million last week. However, this is not the indicator that arouses a serious reaction from market participants. Nevertheless, if the number of new initial applications is significantly lower than the forecast (925,000), then the US dollar is more likely to assert strength (or EUR/USD will decline). This is what began on Wednesday. Thus, during the day, market sentiment will be cautious and the price should not make gyrations (unless other important, unplanned news comes in).

On August 20, the following scenarios are possible:

1) Buying the pair at this time makes no sense as the price has overcome the upward trend line. Thus, you need to either wait for the formation of a new upward trend, or recognize the current breakdown of the trend line as fake, or rebuild the trend line itself. So far, none of these options work. After the price sank by 45 points, an upward retracement may follow. Let me recommend novice traders waiting at least until the morning to assess the prospects for buying EUR/USD.

2) Selling the currency pair at present could become a good trading idea, if the breakdown of the trend line is not fake. It may turn out to be false if today and tomorrow night the pair abruptly resumes its upward movement, and the MACD indicator turns up. However, if everything clears up by tomorrow morning, then it will be possible to consider selling EUR/USD with the targets of 1.1876 and 1.1822.

Support and Resistance Price Levels – Levels that are targets when buying or selling. Take Profit levels can be placed near them.

Red lines are channels or trend lines that display the current trend and show which direction it is preferable to trade now.

Up / down arrows – show when reaching or overcoming which obstacles should be traded up or down.

MACD indicator (10,20,3) – a histogram and a signal line, the crossing of which are signals to enter the market. Recommended for use in combination with trend lines (channels, trend lines).

Important speeches and reports in the economic calendar can greatly influence the movement of the currency pair. Therefore, during their release, it is recommended to trade as carefully as possible or exit the market in order to avoid a sharp price reversal against the previous movement.

Forex beginners should remember that every trade cannot be profitable. The development of a clear strategy and money management are the key to success in trading over a long period of time.

Beyoncé and Jay-Z Debut ‘About Love’ Campaign Video for Tiffany &...

Venus Williams and K-Swiss Reconnect for The Glow Up Collection

When does Gogglebox start again?

Maternal Mortality Surged Ahead of the COVID-19 Pandemic

How Salesforce is Embracing Safety, Tech to Elevate its Dreamforce Event

When is Sarah Harding’s funeral and how can you donate in...

Nicki Minaj’s Husband Slapped With $20M Judgement For Not Responding to...

Plaintiff In Jay-Z Lawsuit Has Been Lying To The Courts To...