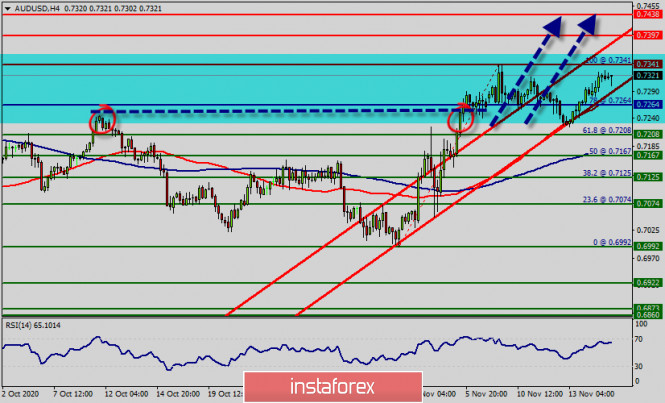 Technical analysis of AUD/USD for November 17, 2020

The level of 0.7264 represents a weekly pivot point for that it is acting as minor support this week. Furthermore, the AUD/USD pair is continuing to trade in a bullish trend from the new support level of 0.7264. Currently, the price is in a bullish channel.

Additionally, the RSI is still signaling that the trend is upward as it remains strong above the moving average (100). This suggests the pair will probably go up in coming hours.

Accordingly, the market is likely to show signs of a bullish trend. This would suggest a bearish market because the moving average (100 & 50) is still in a positive area and does not show any trend-reversal signs at the moment.

Thus, the market is indicating a bullish opportunity above the above-mentioned support levels, for that the bullish outlook remains the same as long as the 100 EMA is headed to the upside.

On the other hand, if the AUD/USD pair fails to break through the resistance level of 0.7397 this week, the market will decline further to 0.7264.

Am I On Track to Retire?

Trading plan for the EUR/USD pair on November 20. Markets are...

5 Best Hedges in the Face of Inflation

How Remote Workers Can Plan A Productive ‘Work-cation’

EUR/USD: plan for the European session on November 25. COT reports....

The US dollar looks better than other currencies today