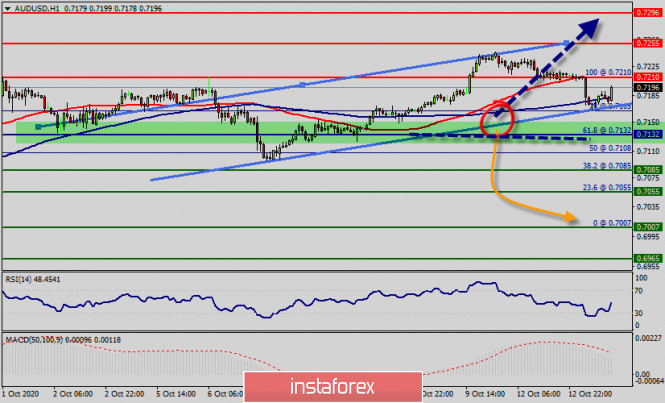 Technical analysis of AUD/USD for October 13, 2020

The level of of 0.7132 will form an important key price in coming hours, so probably to get a bullish market will be about 60% at the price of 0.7132 because our entry point (0.7132) is above the daily pivot point (0.7085). It will very profitable to focus on the daily pivot point because it is the most important level in trading. The trend of AUD/USD pair movement was controversial as it took place in the uptrend channel. Due to the previous events, the price is still set between the levels of 0.7132 and 0.7210. So it is recommended to be careful while making deals in these levels because the prices of 0.7132 and 0.7210 are representing the resistance and support respectively. Therefore, it is necessary to wait till the uptrend channel is passed through. Then the market will probably show the signs of a bullish market. On the one-hour chart, immediate resistance is seen at 0.7210, which coincides with a double top. Currently, the price is moving in a bullish channel. This is confirmed by the RSI indicator signaling that we are still in a bullish trending market. The price is still above the moving average (100) and (50), In other words, buy deals are recommended above the price of 0.7132 with the first target at the level of 0.7210. From this point, the pair is likely to begin an ascending movement to the price of 0.7255 with a view to test the major resistance at the 0.7296 level. AUD is trading positively against USD during today’s morning session, developing long -term (bullish) momentum and returning to local highs of yesterday in order to break out it. Hence, probably, the main scenario – is continued growth to objectives of 0.7210, 0.7255 and try to hit 0.7296. If the pair fails to pass through the level of 0.7210, the market will indicate a bearish opportunity below the first resistance level of 0.7210. In this regard, sell deals are recommended lower than the 0.7210 level with the first target at 0.7132 to return to the daily pivot. It is possible that the pair will turn downwards continuing the development of the bearish trend to the level 0.7085. However, the market is still in an uptrend. We still prefer the bullish scenario. According to the previous events the price is expected to remain between 0.7132 and 0.7296 levels. Buy-deals are recommended above 0.7132 with the first target seen at 0.7255 and 0.7296. The movement is likely to resume to the point 0.7210 and further to the point 0.7255 and 0.729.

Tax Preparation is a Stopgap That Can Turn Into a Career

Technical Analysis of ETH/USD for December 18, 2020

Technical analysis recommendations for EUR/USD and GBP/USD on January, 18

Trading plan for the EUR/USD pair for the week of April...

Euro’s rally depends on pace of vaccination in Europe