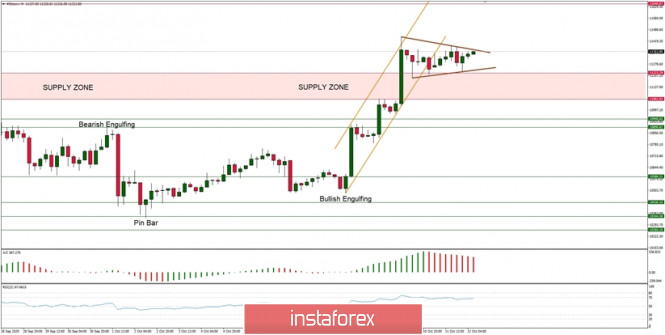 Technical Analysis of BTC/USD for October 12, 2020

According to of the latest Bloomberg newsletter, the election of Joe Biden as President of the United States would contribute to more widespread adoption of Bitcoin (BTC), including the eventual approval of ETFs. In addition, he referred to the policies of President Donald Trump’s administration.

“A potential Joe Biden presidency should shine favor on further appreciation in the price of Bitcoin, in our view. New leadership may change the hands-off policy of the Trump administration – to the detriment of the broader crypto market – and nudge the firstborn benchmark toward the mainstream, improving chances for an ETF”.

Given that yesterday the Justice Department released a 70-page document, “Cryptocurrency: An Enforcement Framework,” the newsletter was likely written before.

The author claims that choosing Biden would also inhibit the development of DeFi. Both conclusions are based on the assumption that a “democratic system” would potentially increase regulatory transparency in the cryptocurrency market. The DeFi space has exploded this year in a completely unregulated environment. It is no coincidence that the culprits of the KuCoin hack are laundering their illicit profits via the largest decentralized exchange, Uniswap.

Bloomberg says Bitcoin’s price will continue to rise regardless of the election result. It also states that if BTC continues to grow during the next presidential term – at a rate that is up to half the 2016-2020 rate – it will reach $ 80,000 by 2024:

“Seemingly unstoppable trends in U.S. debt-to-GDP, quantitative easing (QE) and the increasing Bitcoin hash rate indicate a crypto price more likely to keep advancing during the next presidential administration, in our view. About half the 1,400% gain since the 2016 vote would get the Bitcoin price toward $ 80,000 in 2024”.

The BTC/USD pair has been rallying from the level of $10,568 when the Bullish Engulfing pattern had been made. The pair move up all the weekend and the last high was made at the level of $11,144. The Supply Zone located between the levels of $11,062 – $11,233 had been violated, so now it can be used as a Demand Zone by bull. The market is reacting to this zone already, so the level of $11,233 is now the intraday support as the market is now consolidating in a Triangle pattern. The next target is seen at the level of $11,646 (after the Triangle breakout).

Analysis of EUR/USD on October 2. Inflation in the European Union...

Jaime Harrison Breaks Fundraising Record By Hauling in $57 Million For...

Finding Out What’s Next for Naturi Naughton and Tasha St. Patrick

GBP/USD: plan for the American session on September 15

Left with no more support, dollar continues to fall