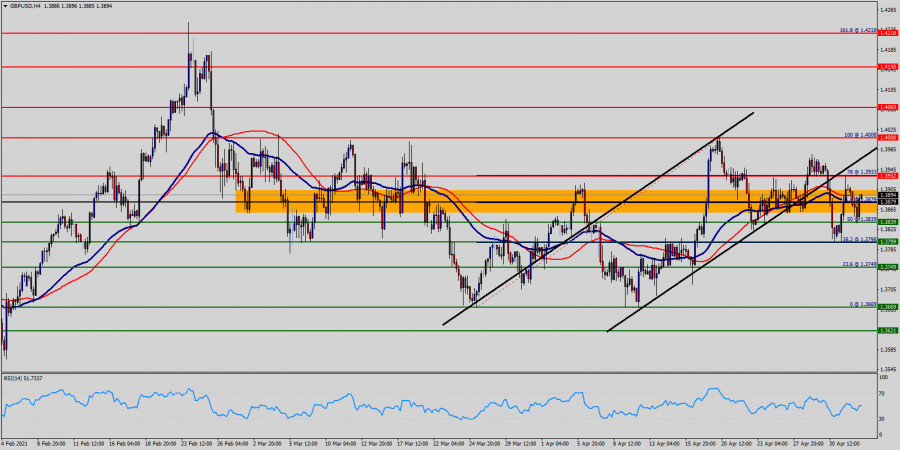 On the 4-hour chart, the GBP/USD pair continues moving in a bullish trend from the support levels of 1.3799 and 1.3839. Currently, the price is in a bullish channel. This is confirmed by the RSI indicator signaling that we are still in a bullish trending market. As the price is still above the moving average (100), immediate support is seen at 1.3839, which coincides with a golden ratio (50% of Fibonacci). The GBP/USD pair rose perfectly, remain bullish for a further climb. Price is testing major resistance at 1.3932 (78% of Fibonacci retracement, bullish bar harmonic formation) and we expect to see a strong reaction off this level to push price up towards 1.4008 before 1.3879 support (61% Fibonacci retracement, horizontal swing low support). However, the pair is trading above its pivot point. It is likely to trade in a higher range as long as it remains above the pivot point. Long positions are recommended with the first target at 1.4008. A break of that target will move the pair further upwards to 1.4069. The pivot point stands at 1.3879. RSI (34) sees major ascending resistance line acting as resistance to push price up from the area of 1.3839 – 1.3799. According to the previous events the price is expected to remain between 1.3839 and 1.4069 levels. Buy-deals are recommended above 1.3839 with the first target seen at 1.3932. The movement is likely to resume to the point 1.4008 and further to the point 1.4069. At the same time, if a breakout happens at the support levels of 1.3869, then this scenario may be invalidated. But in overall, we still prefer the bullish scenario.

EUR/USD: plan for the American session on September 9

A terabyte isn’t what it used to be—14% of Internet customers...

Chrissy Teigen Speaks of Time Being Followed and Harassed By Racists...

Vanessa Bryant Pays Tribute to Daughter Gianna on Her Birthday With...

EUR/USD Losses Altitude Due To USDX

EUR/USD. US dollar fails to find a leverage