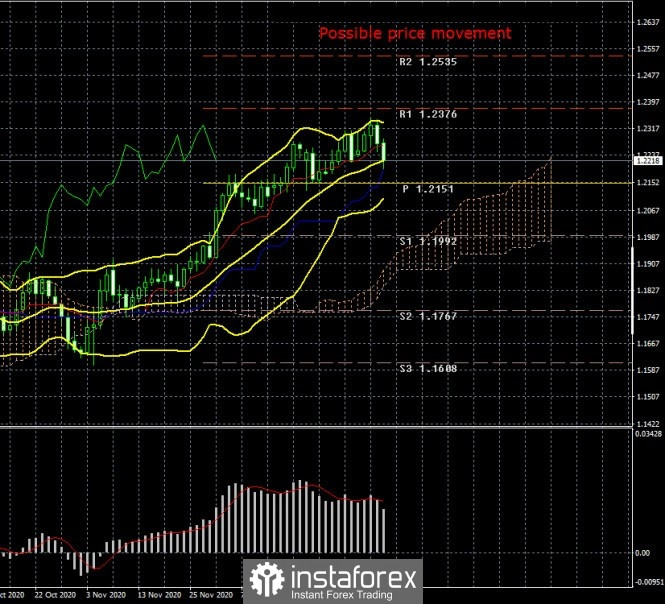 Trading plan for the EUR/USD pair for the week of January 11-15. New COT (Commitments of Traders) report. Another sluggish

During the past week, the EUR/USD pair again updated 2.5-year highs and began a new round of downward correction at the end of the week. At the same time, as before, this downward movement is very difficult to call a correction, rather a rollback. Recall that the euro/dollar pair has been growing for 2 months without any serious corrections and managed to rise in price by 700 points during this time, which is not so small for it. Thus, another sluggish pullback down can be completed very quickly. The resumption of the upward trend. Unfortunately for logic and common sense, the euro/dollar pair continues to move in the most confusing and groundless way. That is, there seems to be a fundamental background, there are macroeconomic reports, however, the pair is trading exactly the opposite, as it should be trading. Thus, a price rebound from the critical Kijun-sen line may trigger a resumption of the upward trend. 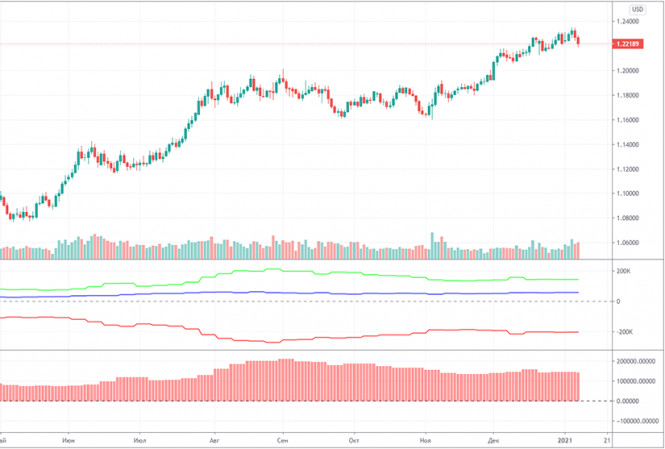 During the last reporting week (December 29-January 4), the EUR/USD pair increased by 55 points. Again, minimal price changes, however, the euro/dollar pair has been moving steadily up in recent weeks. Even though the pair rises or falls by no more than 100 points per week, the upward trend remains strong and stable. However, the changes shown by the latest COT report are also minimal. During the reporting week, a group of Non-commercial traders opened 2 thousand buy orders and 3 thousand sell orders. Thus, formally, the net position has decreased, and the mood of professional traders has become more “bearish”. However, this is only formal, because the total number of contracts opened by non-commercial traders exceeds 340 thousand. Thus, opening/closing 2-3 thousand contracts is nothing. Moreover, the strengthening of the “bearish” mood now also means little, because COT reports signal demand for the euro currency. They do not take into account the demand for the US dollar. Thus, a few months ago, when the net position steadily decreased (as can be seen from the second indicator), the demand for the euro among major traders decreased. However, the dollar’s demand may decrease, so with a visible drop in the interest of major traders in the euro currency, it was still growing. An unpleasant moment. In the last few weeks, changes in the COT reports are such that no conclusions can be drawn at all. If earlier the green and red lines of the first indicator converge or diverge, now they are simply directed sideways, signaling the absence of changes.

The entire fundamental background of the past week applied only to the States. In the European Union, nothing interesting happened. It should immediately be noted that when Donald Trump provoked an attack on the Capitol, and the last two Democratic senators took their seats from the state of Georgia and it turned out that all power in the country over the next four years will be concentrated in the hands of Democrats, the US dollar continued to fall calmly. And it was logical, the events are still important and not in favor of the dollar. Trump’s actions were condemned by the whole world, at least 4 people were killed. However, it is still very difficult to explain why the dollar continues to fall in principle. We have repeatedly noted that the US economy looks stronger and more stable than the European one. Therefore, paired with the euro, it is the dollar that should grow. However, investors (and primarily large investors) have their own opinion on this matter, so the US dollar continues to decline. The most ridiculous and paradoxical thing happened on Friday. On this day, the European Union became aware of a decrease in the unemployment rate to 8.3%, and in the States, there were reports on nonfarm Payrolls and average wages with the unemployment rate. In the first place in terms of importance, of course, were nonfarm Payrolls and they completely failed. Instead of the projected +70-100 thousand new jobs created outside the agricultural sector, in reality, the indicator decreased by 140 thousand jobs. The unemployment rate remained unchanged, and wages rose slightly stronger than expected. But in general, the package of macroeconomic statistics from overseas can be called a failure. Therefore, on Friday, the dollar rose by 60 points.

1) The pair’s quotes have started another pullback from 2.5-year highs, however, the upward trend remains. Even though the COT reports and the fundamental background continue to signal a possible and very likely fall in the pair’s quotes and the baselessness of the current growth, the trend persists. “Technique” now continues to signal an upward trend, so it is recommended to trade for an increase in the current timeframe.

2) To be able to sell the EUR/USD pair, you need to at least wait for the price to consolidate below the Kijun-sen lines. But even in this case, there is no guarantee that a downward trend will start. Recall that in recent weeks and even months, technical signals for the beginning of a downward trend have been formed several times, and each time they turned out to be false. Thus, despite the high values of the euro exchange rate, we recommend that you be careful about sales, although they are very attractive now, and the euro currency will not be able to grow forever.

Explanation of the illustrations:

Price levels of support and resistance (resistance/support) – target levels when opening purchases or sales. You can place Take Profit levels near them.

Support and resistance areas – areas from which the price has repeatedly bounced.

Indicator 1 on the COT charts – the net position size of each category of traders.

Indicator 2 on the COT charts – the net position size for the “Non-commercial” group.

The Ultimate Guide to Camping for Beginners

5 vintage video games designed by women to inspire your next...

The Financial Times criticized Citibank analysts for an implausible forecast for...

This Year You Learn to Harness the Power of Digital Marketing

Hot forecast and trading signals for GBP/USD on September 7. COT...

EUR/USD: plan for the European session on December 7. COT reports....