Using complex analysis, we can see the next round of speculative operations, which supported the previously set price price.

The trades yesterday did not differ much from the previous one. Similar speculative activity and long operations were observed, in which the US dollar was in a “sell-out”. Such a phenomenon is peculiar not only to the GBP / USD currency pair, but also to its counterpart, the EUR / USD pair, where similar impulse leaps appeared but is on a slightly smaller scale.

During the downward move from the level of 1.2770, a largest correction was recorded, so traders became concerned at such a sharp change in price. A consolidation above the level of 1.2550 suggests that there may be a failure in the tact itself, but we should remember that on the basis of the same tact, the bears managed to recover more than 77% of the movement on May 18 – June 10 . It turns out that the quote, even with such strong changes, still retained its position in the range 1.2150 // 1.2350 // 1.2620, where all the movement began.

Analyzing the past trading day every minute, we can see that a round of long positions arose at the start of the European session, where the quote once again found a foothold in the region of the mirror level 1.2350. The main price jumps were recorded in the period 13: 30-17: 30 (UTC + 1), during which the quote came close to the level of 1.2500. Afterwards, a sharp slowdown was recorded.

With regards to volatility, the indicator came out again above 120 points, which indicates a high speculative activity among market participants. Strategies on local operations with such a market sentiment is considered the most suitable when trading.

As discussed in the previous review, traders were focused on trading in the direction of the trend, but a consolidation lower than 1.2350 never happened. Instead, an alternative scenario arose, which made it possible to enter local operations above 1.2405.

Analyzing the trading chart in general terms (the daily period), we can see that the variable level of 1.2250, relative to which a round of long positions has arisen, was repeatedly used as a strong support level. The most impressive upward move from it arose on April 21, based on which the quote managed to return to the level of 1.2620.

As for macroeconomic reports, according to the data published yesterday, business activity in the UK manufacturing sector grew from 40.7 points to 50.1 points in June. However, there was no market reaction at the time of publication of the data, but half an hour before the release of the report, there was a local jump in the pound by 35 points.

The main event though was the report of the ADP on unemployment in the United States, which revealed that in June, the indicator reflected a significant increase in employment, as well as a significant revision of the data for May.

“Employment in small companies began in June. As the economy slowly continues to recover, we are seeing a significant rebound in the industries that once experienced the greatest job losses. In fact, 70% of the jobs added this month were in the leisure and hospitality, trade and construction sectors, “said Ahu Yildirmaz, co-head of ADP Research Institute

Market reaction to the report was very surprising, as the US dollar began to lose ground almost throughout the market even though the ADP indicators reflected a recovery and perhaps the highest employment growth in recent years.

Meanwhile, German Chancellor Angela Merkel made a speech yesterday, where she called on the European Union to prepare in case its negotiations with the United Kingdom fails.

“I will continue to seek a good solution, but the EU and Germany must also prepare for the fact that an agreement will not be reached,” Merkel said.

Today, the latest report on the US labor market will come out, in which according to forecasts, the unemployment rate should drop from 13.3% to 12.3%, and 2,900,000 new jobs should be created. These really pleases investors as they are signs of economic recovery.

Analyzing the current trading chart, we can see that the quote consolidated above the level of 1.2500, almost reaching the area of June 24’s high [1.2540]. A rebound from the levels 1.2500 / 1.2540 may still occur, especially if the upcoming data confirms the gradual economic recovery of the United States.

As for market sentiment, a high coefficient of speculative operations is recorded, which affects volatility.

Based on the information above, we present these trading recommendations:

– Consider buy positions as an alternative operation if the quote consolidates higher than 1.2550 in the four-hour period, with the prospect of a move to the level of 1.2620. 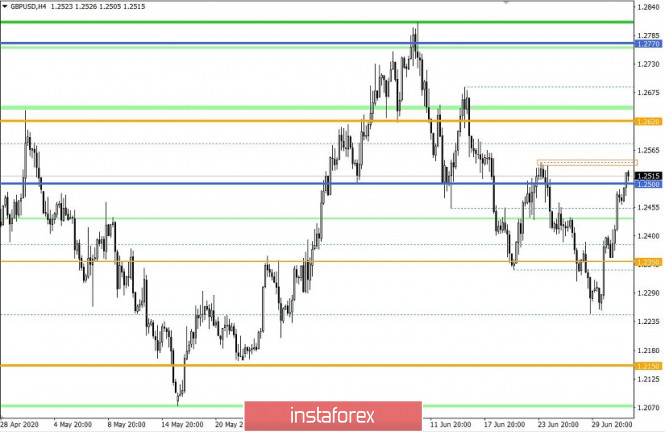 Analyzing the different sectors of time frames (TF), we can see that the indicators of technical instruments relative to the minute, hour and day periods signal buy due to the consolidation of prices above the level of 1.2500. To change it, the quotes must consolidate in the region of 1.2460. 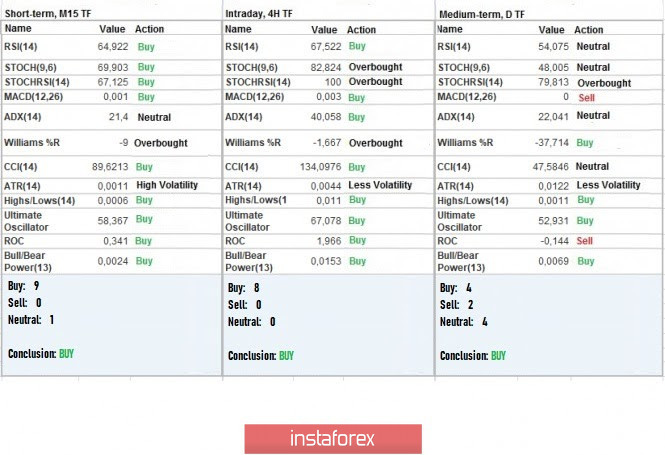 (July 2 was built, taking into account the time of publication of the article)

The volatility of the current time is 66 points, which is 45% lower than the average daily value. Based on the current dynamics, as well as speculative activity, it can be assumed that daily volatility will again be above 100 points. 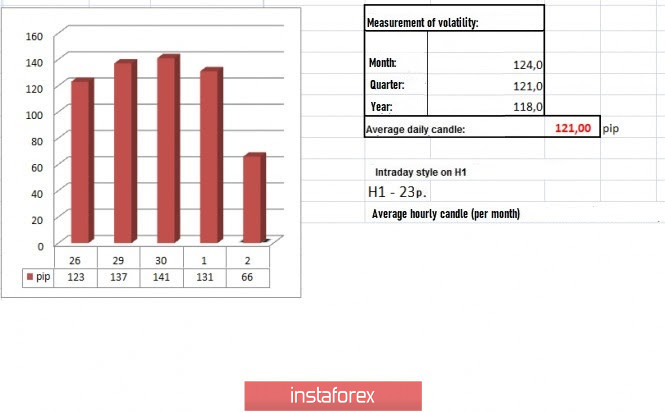 **** The article is built on the principle of conducting a transaction, with daily adjustments

Hot forecast and trading signals for the EUR/USD pair on August 5. COT report. An important ADP report could bring the pair

Overview of the GBP/USD pair. August 5. Britons are leaving the UK after the Brexit vote. Relations between China and America

Overview of the EUR/USD pair. August 5. The only chance of Donald Trump in the election and the US dollar in the future is

EUR/USD: The large-scale trade war between the US and the world...

Overview of the EUR/USD pair. July 28. Epidemiological chaos in the...

Why I don’t have a child: I cherish my freedom

The best at-home wax strips, according to customer reviews

Hot forecast and trading signals for the EUR/USD pair on August...

Overview of the EUR/USD pair. August 5. The only chance of...

10 Most Beautiful Airbnbs in Coron Palawan

It’s too early to bury the dollar; Overview of USD,...