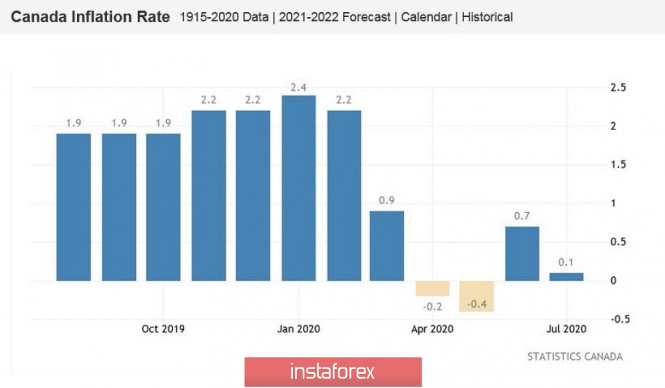 Weak inflation data, which was published in Canada today, did not affect the mood of investors. The Canadian dollar continued to trade in the same way as before the release, ignoring the slowdown in inflation indicators. The loonie only reacts to the behavior of the US currency. However, the national statistics of Canada should not be ignored, since today’s release will still affect USD/CAD traders in the foreseeable future.

July inflation significantly fell short of the forecast values. In monthly terms, the overall consumer price index showed positive dynamics for two months – in May and June. But the index fell back to zero in July. The indicator also fell to almost zero (0.1%) in annual terms. Core inflation fell into negative territory altogether: the core index slowed to -0.1% on a monthly basis. Considering the structure of these indicators, we can conclude that the main anchor of activity is still tourism. For example, air travel prices fell by 8.6%, while housing prices dropped 27%. 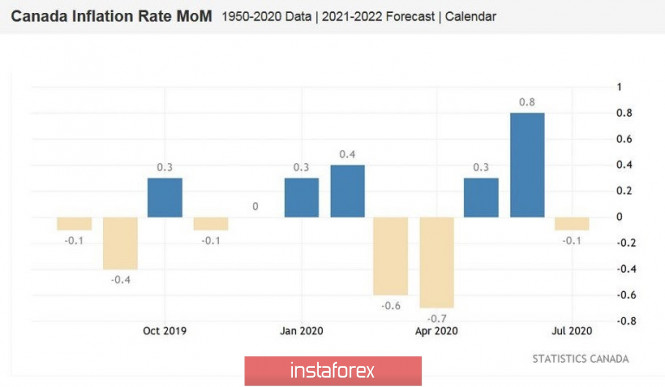 In connection with today’s release, it is necessary to recall the last meeting of the Bank of Canada, which took place on July 15th. The newly appointed central bank governor, Tiff Macklem, then outlined the conditions under which the regulator would consider raising the interest rate. According to him, rates will remain at current levels until “inflation reaches the two percent target, and does not gain a foothold in this area.” In other words, he emphasized the importance of inflation indicators, linking the dynamics of their growth with the prospects for tightening monetary policy.

The next meeting of the Canadian central bank will take place in mid-September – but now there is no doubt that the Bank of Canada will react negatively to the July figures. Despite the fact that the oil market showed positive dynamics last month – the price of a barrel of oil WTI fluctuated in the range of 39-42 dollars, Brent – in the range of 42-43 dollars. Therefore, the weak growth in inflation indicators is mainly associated with internal reasons due to the coronavirus crisis.

USD/CAD traders only formally reacted to today’s release. The Canadian dollar follows the US dollar today, which in turn sharply reacts to US political events. The long-suffering bill to stimulate the American economy was again in the spotlight. Over the past few weeks, rumors surrounding this document have been contradictory.

Republicans and Democrats, who can not separately pass the law (the Upper House of Congress is controlled by US President Donald Trump’s party members, while the Lower House is controlled by representatives of the Democratic party) sat down at the negotiating table at the end of July. At first, the parties voiced optimistic comments, declaring a constructive dialogue and hinting at an early compromise. But then the situation began to deteriorate and along with it, the mood of dollar bulls began to go down as well. As a result, talks reached an impasse, as reported by White House Economic Adviser Larry Kudlow the Friday before last. US Treasury Secretary Steven Mnuchin assured reporters that the negotiations “are about to resume”. However, Head of the Council of Economic Advisers Tyler Goodspeed refuted the treasury secretary’s optimism. He said that Trump will not compromise with the Democrats and will not agree to their proposal (they proposed to increase the volume of the bill from one to two trillion dollars).

Today, however, dollar bulls have a light at the end of the tunnel again. And quite unexpectedly, given the previous rhetoric of Republicans, representatives of the Trump administration – and even Trump himself, who recently issued executive orders bypassing Congress. Nevertheless, White House Chief of Staff Mark Meadows said today that unofficial negotiations with the Democrats are underway, which are “very, very productive.” After this announcement, the dollar index turned and went up, reflecting the increased demand for the US currency throughout the market. 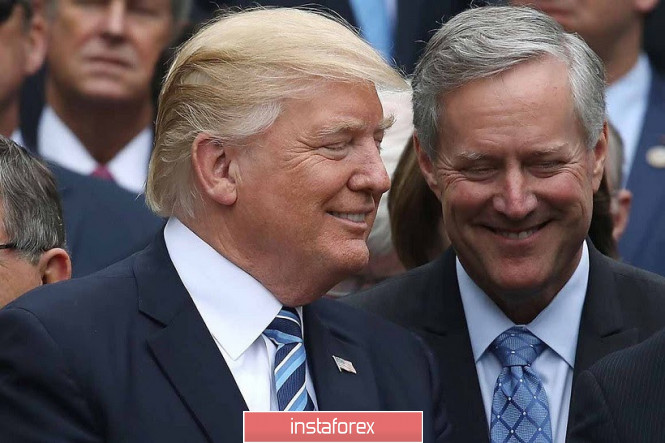 The USD/CAD pair was no exception: the loonie retreated from the bottom of the 31st figure and updated the daily high. The future prospects of the pair also depend on the greenback’s behavior. If the information about the ongoing talks is confirmed, the price will continue its corrective growth up to the 1.3260 level (the Tenkan-sen line on the daily chart). But if journalists exaggerated or misinterpreted Meadows’ words, then the bears will move with new strength to the main support level of 1.3100 (the lower line of the Bollinger Bands indicator on the daily and weekly charts). The situation is uncertain, so it is worth waiting with trading positions for now – we will find out tomorrow in which direction the pendulum will swing.

Sean Gallagher and an AI expert break down our crazy machine-learning...

Why Organizations Should invest in Influencer Marketing for their Brand?

Black-owned Juice Bar in Minnesota Vandalized And Shut Down Days After...

California Black Man Recovering After Being Shot 7 Times By White...

Coinbase and UnitedMasters Partner to Give Artists Option to be Paid...

Euro will rise, but not as much as previously expected (EUR/USD...