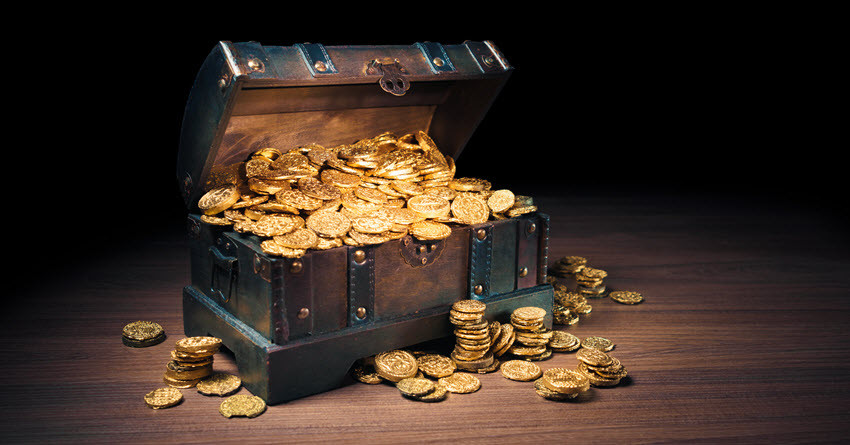 Gold continues to disappoint investors and traders, but the outgoing week leaves us hopes for a recovery in the price of the precious metal in the second half of 2021. So far, the signs of recovery are still very small and insignificant to draw far-reaching conclusions. However, patience is not my benefactor, so I will consider the situation in a complex of long-term and short-term prospects, especially since the growth of gold quotes during the first ten days of April suggests some hopes that the black band of the precious metal has been left behind.

As you know, the price of gold is influenced by several long-term and short-term factors. These factors include interest rates, opportunity cost, demand for ETF assets that invest in gold, demand from the jewelry industry, inflation expectations, and investors seeking safe havens in the event of unfavorable developments.

I will not go into detail now on the influence of bond yields on the price of gold, but I will consider the influence of stock prices on gold quotes. During the growth of the stock market, gold often loses its attractiveness, which, in fact, we can observe in the last six months. From October 2020 to April 2021, the DJIA added 22% to value, the S&P 500 rose 21%, and the NASDAQ Composite rose 24%. All this time, investors have been selling gold, which is down 10%. Investors were especially active in withdrawing from exchange-traded funds (ETFs) investing in bullion of precious metal, in the so-called “paper gold” (Fig. 1). 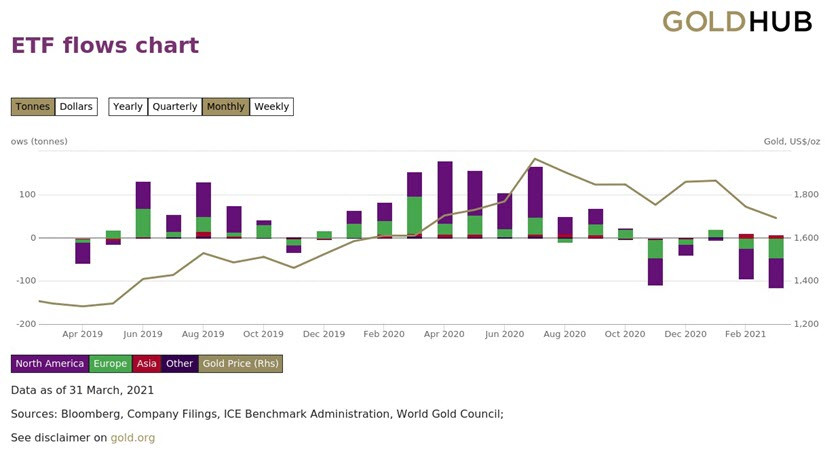 Speaking about the decline in demand for gold, it should be noted that this phenomenon is not evenly distributed across all investments and all countries. For example, in March 2021, the demand of retail investors around the world for gold coins increased. According to the US Mint, sales of American Eagle coins in March were 55,500 ounces (1.7 tons; $94 million), and total sales were 401,500 ounces (12.5 tons; $720 million). This was the third-strongest quarter in the history of mints’ gold sales, behind only 1999 (694,000 ounces) and 1987 when it sold (420,500 ounces).

Further evidence of significant interest in investing in physical gold was provided by the Perth Mint (Australia), which reported significantly higher levels of purchases from retail participants. February sales of its minted gold jumped 441% from a year earlier, to a monthly record of 124,104 ounces. This increase was due to higher levels of retail demand from American consumers.

Another factor in the recovery was the increased demand for gold from the jewelry industry. After the collapse in 2020, demand for physical gold in India and China also began to recover. Thus, despite the overall drop in demand for investment products, it is becoming clear that retail investors currently prefer physical gold.

As I noted above, the opportunity value of stocks that offer higher returns has led to a decrease in investor interest in investing in gold, but the pendulum may well swing in the other direction. Speaking of share prices, it should be noted that now 90% of the companies included in the S&P 500 index are quoted above the 20-week (semi-annual) average line, and 95% of quotes are above the 50-week (annual) average line. This at least indicates the overheating of the American stock market and a possible future correction. In other words, the US stock market is now too expensive to buy, and although it is still possible to find assets with attractive prices on it, such assets are decreasing, and the temptation to take profits from investors is growing.

Relatively high interest rates continue to influence the price of gold, but the determination of central banks to keep rates low for a long time is not doubted by anyone. Even though the yield on 10-year US bonds continues to grow and, quite possibly, will grow even more, I would not expect an increase in yield above 2% per annum for some reasons, including those related to the size of the US government debt (Fig. 2). 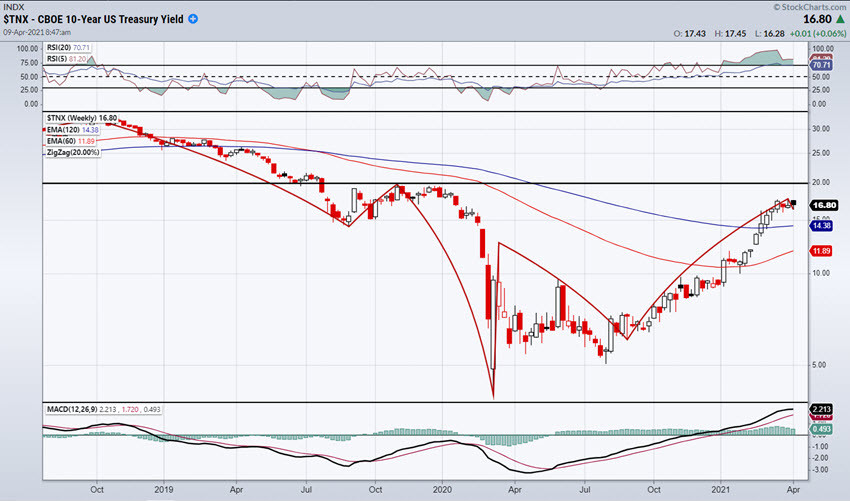 Therefore, analyzing various factors, it can be assumed that the pressure from the growth of interest rates is coming to an end. As you can see from the diagram, there has been a very significant overbought in interest rates for several weeks now – when the RSI indicators (5 and 20 weeks) climbed into the attic and continue to remain there, which is fraught with a subsequent decrease in the level of bond yields.

For the sake of fairness, it should be noted that the indicators can stay in the attic for some time. However, in my deep conviction, which is based on the policy of the US Federal Reserve, the yield on 10-year bonds in the next couple of years will remain between the values of 1.0% -2.0% per annum. At the same time, inflation around the world will continue to gain momentum, which will inevitably lead to an increased focus on gold as a defender asset. 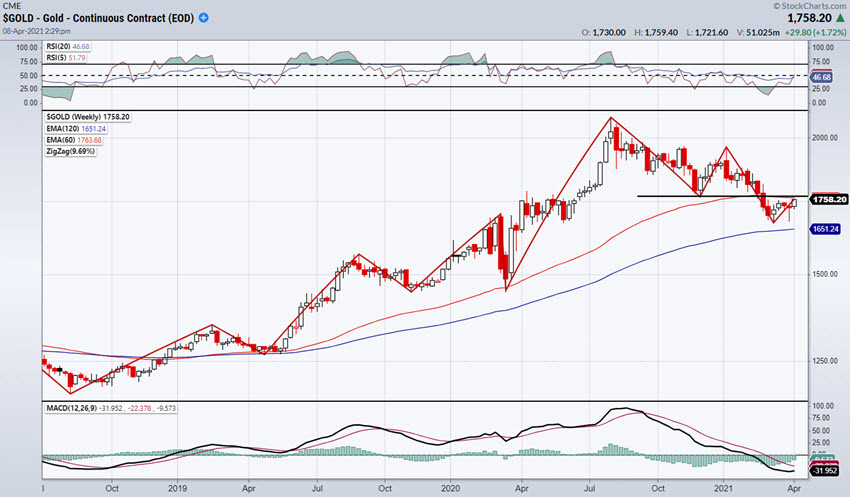 From the point of view of technical analysis, the price of gold is in a short-term correction, below the annual averages, but in a long-term upward trend. At the same time, the current picture is very reminiscent of the so-called breakout confirmation when the “double top” pattern is formed. It may take several more weeks before gold acquires a meaningful movement in one direction or another, and I really want to hope that the “double top” pattern will not get its realization, and gold, in full accordance with the theory of failed patterns, will go to conquer new peaks. Fundamentally, there is every reason for this, it’s just that their time has not come yet. Be careful and follow the rules of money management.

Technical Analysis of BTC/USD for March 1, 2021

Black Door Dash Driver, Working With Her Child, Chased By ‘A...

How to cook sweet potato

GBP/USD and EUR/USD: A new strain of coronavirus has spread in...