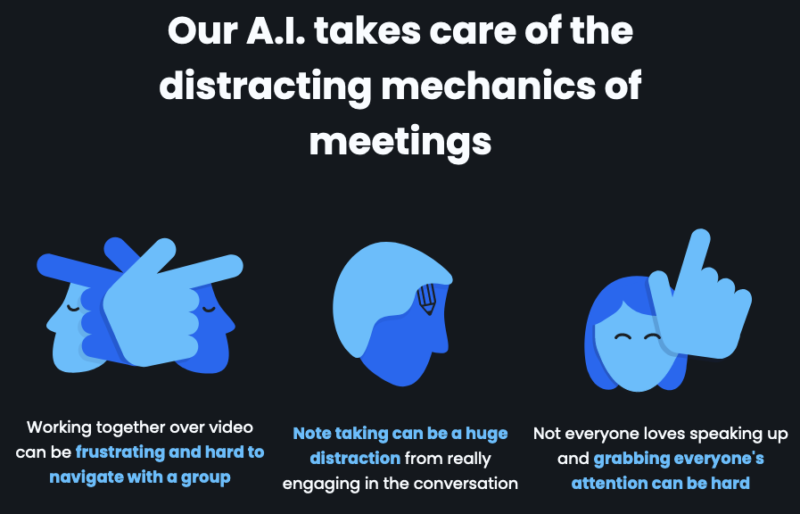 Julian Green was explaining the big problem with meetings when our meeting started to glitch. The pixels of his face rearranged themselves. A sentence came out as hiccups. Then he sputtered, froze, and ghosted.

Green and I had been chatting on Headroom, a new video conferencing platform he and cofounder Andrew Rabinovich launched this fall. The glitch, they assured me, was not caused by their software, but by Green’s Wi-Fi connection. “I think the rest of my street is on homeschool,” he said, a problem that Headroom was not built to solve. It was built instead for other issues: the tedium of taking notes, the coworkers who drone on and on, and the difficulty in keeping everyone engaged. As we spoke, software tapped out a real-time transcription in a window next to our faces. It kept a running tally of how many words each person had said (Rabinovich dominated). Once our meeting was over, Headroom’s software would synthesize the concepts from the transcript; identify key topics, dates, ideas, and action items; and, finally, spit out a record that could be searched at a later time. It would even try to measure how much each participant was paying attention.

Meetings have become the necessary evil of the modern workplace, spanning an elaborate taxonomy: daily stand-ups, sit-downs, all-hands, one-on-ones, brown-bags, status checks, brainstorms, debriefs, design reviews. But as time spent in these corporate conclaves goes up, work seems to suffer. Researchers have found that meetings correlate with a decline in workplace happiness, productivity, and even company market share. And in a year when so many office interactions have gone digital, the usual tedium of meeting culture is compounded by the fits and starts of teleconferencing.

How to Invest in Gold

Five Tools to Help Entrepreneurs Save Time and Increase Productivity

Analysis and trading signals for beginners. How to trade EUR/USD on...

We’re holding an online IT roundtable on October 15, and you...