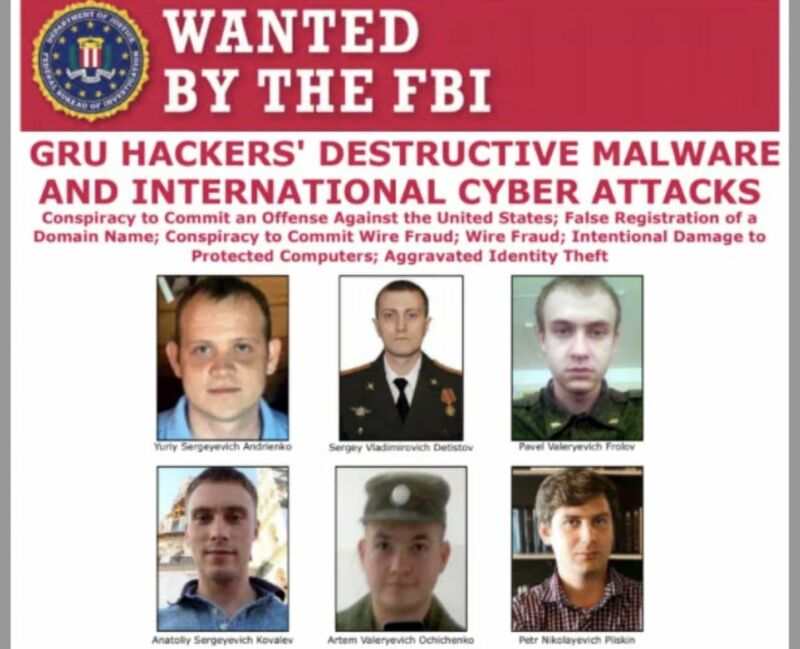 Six men accused of carrying out some of the world’s most destructive hacks—including the NotPetya disk wiper and power grid attacks that knocked out electricity for hundreds of thousands of Ukrainians—have been indicted in US federal court.

The indictment said that all six men are officers in a brazen hacker group best known as Sandworm, which works on behalf of Unit 74455 of the Russian Main Intelligence Directorate, abbreviated from Russian as GRU. The officers are behind the “most disruptive and destructive series of computer attacks ever attributed to a single group,” prosecutors said. The alleged goal: to destabilize foreign nations, interfere with their internal politics, and cause monetary losses.

Among the hacks is NotPetya, the 2017 disk-wiping worm that shut down the operations of thousands of companies and government agencies around the world. Disguised as ransomware, NotPetya was in fact malware that permanently destroyed petabytes of data. The result, among other things, was hospitals that turned away patients, shipping companies that were paralyzed for days or weeks, and transportation infrastructure that failed to function.

Joe Biden and Kamala Harris Are Focusing on Black Businesses

Technical Analysis of ETH/USD for November 24, 2020

USD/JPY Trading Plan for 10 May

How to Spend Money Like The Greek God or Goddess You...

Comcast shut off Internet to hundreds, saying they were illegally connected