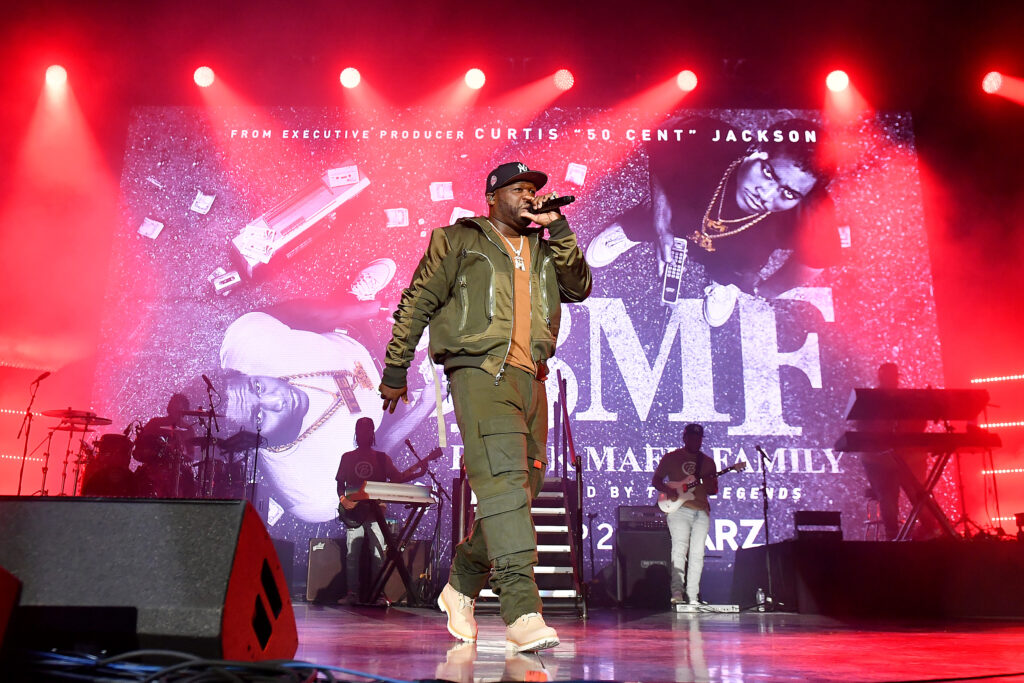 Fans in attendance at the Atlanta premiere of BMF, Curtis “50 Cent” Jackson’s latest partnership with STARZ, were surprised when the G-Unit leader turned TV mogul himself took to the stage to introduce the series on Thursday.

Following a glowing introduction from the cable network’s CEO and President, Jeffrey Hirsch, during which he referred to 50 as “a man with whom we will be partnering for a very long time,” the rapper took the stage to share some details about the making of the series.

“I’m really excited about this project,” 50 told the crowd at the Cellairis Amphitheater. “Power was an amazing project, it was amazingly successful. It was the highest-rated show for African Americans and Latinos. I’m really proud of that. But it wasn’t a true story. This is real. So it’s a lot more exciting for me.”

Executive produced by Jackson, actress Tasha Smith and showrunner Randy Huggins, BMF is based on the life of Demetrius “Big Meech” Flenory and Terry “Southwest T” Flenory. From the late ’80s through the early 2000s, the brothers led the Detroit-based Black Mafia Family, which authorities claim was one of the largest drug trafficking and money laundering rings in the city’s history. Operating between their hometown and Atlanta, Meech and T became the stuff of legend among hip-hop circles and were very active on the Atlanta entertainment scene.

“To be as authentic as possible, we had Lil Meech play his dad,” 50 said after praising the show’s entire cast, which includes Wood Harris, Steve Harris, LaLa Anthony, and rising Detroit rapper Kash Doll. “I want you to remember this because this is probably the last time this’ll even happen in television. For him to have the opportunity to play his dad was such a longshot. I had to talk to him personally and have him move from Atlanta to Los Angeles and put him with acting coaches. And he worked his ass off, and I’m so proud of him. Since he’s performed in this television show, he’s gone on to work as an independent film actor, so expect to see him.”

Following the premiere screening of the show’s first episode—set to air Sunday, Sept. 26 at 9 pm—fans were treated to performances by 50 Cent and special guests including Snoop Dogg, T.I., Flo Rida, Da Baby, Jeremih, and Lil Duval. To close out the concert, 50 premiered “Wish Me Luck,” the “BMF” theme song, featuring Moneybagg Yo and Snoop, a recurring cast member on the new drama.

Following Sunday’s premiere, BMF will move to its regular timeslot of 8 pm ET/PT starting on Oct. 3. In addition to airing across all STARZ platforms in the US and Canada, the show will be available on the STARZPLAY premium streaming platform across Europe, Latin America, and Japan. The series will also be available to viewers who subscribe to STARZ through third-party platforms like Philo and HULU.

Kids closet organization: How to organize your child’s wardrobe

Grow Your Business By Launching A Podcast. These Master Classes Show You How

The rising value of Influencers in the Crypto community

Kyrie Irving: ‘I Chose to be Unvaccinated…I Would Ask You All...

Smart brings Apple Music to its customers with an exclusive 6-month...