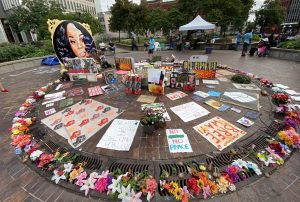 It’s been five months since Breonna Taylor, a 26-year-old Black EMT worker, was fatally shot by Louisville Metro Police Department officers while sleeping in her home. Yet, inconceivably, no one has been charged for her death. Activists, however, are amplifying the calls for justice.

Until Freedom, an organization geared toward fighting systemic and racial injustice, announced BreonnaCon, a multi-day event in Louisville, Kentucky, to direct resources, talent, and energy towards achieving justice for Taylor.

The event starts tomorrow, Aug. 22, and will culminate Aug. 25 with a massive demonstration.

According to a press release, this “first-of-its-kind community convention” will include workshops, training, women’s and men’s empowerment programs, a school supplies giveaway, community BBQ, and a Faith Revival at Kingdom Fellowship Center.

“BreonnaCon will engage, activate, and transform the Louisville community by building a comprehensive slate of programming that will amplify the urgent need for Justice for Breonna,” said Until Freedom Co-Founder Tamika Mallory. “BreonnaCon will address a number of issues impacting the community including food insecurity.”

Real Housewives of Atlanta personality Porsha Williams, who is facing five years in prison on a felony charge for participating in a Louisville protest last month, is also slated to attend.

Legendary rapper Snoop Dogg sits on the board while entrepreneur, investor, and philanthropist Monique Idlett-Mosley serves as the board chair.

Technical Analysis of BTC/USD for October 21, 2020

Hot forecast and trading signals for EUR/USD on October 12. Buyers ready to rally towards 1.1855 and 1.1900, but bearish

BTC analysis for October 21,.2020 – Both targets reached and potential for test of...

Bucket List: Top 15 Best Things To Do in Veenendaal, Netherlands

This $40 Bundle Is the Stepping Stone You Need Toward a...