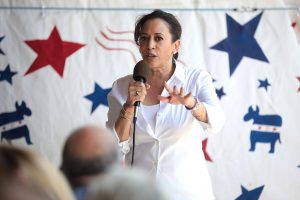 Once former Vice President Joe Biden announced Sen. Kamala Harris as his vice presidential nominee, the racists were ready with rhetoric that has suddenly reared its ugly head more prominently. A meme started circulating that blatantly disrespected Harris and someone had the gall to put it on a T-Shirt and sell it on Amazon. After getting complaints from many consumers, the online retailer had the product removed because of the salacious statement printed on the shirt, according to Fox News.

The Oxygen Bandit, which was one of the third-party sellers offering t-shirts, tank tops, hoodies, and sweatshirts, had a similar design that matched Biden’s campaign logo with the words “Joe and the h–.” The price range of the items was from $24.99 to $42.99.

“All sellers must follow our selling guidelines and those who do not will be subject to action including potential removal of their account,” Amazon stated in a written statement to Fox News. “The products in question have been removed.”

The meme placed on the items for purchase was the same meme that got an NBA photographer terminated after he posted it on his social media account.

He released a statement after the firing:

“I deeply regret posting on my Facebook page a phrase that I saw and copied from others as a sample of some people’s reactions to Biden’s selection of Senator Harris as his choice for VP. The phrase I posted does not reflect my personal views at all. I should not have been so insensitive to post the statements by others. I sincerely apologize to all of those who have rightfully been offended and I have taken the post down from my FB page. It was a horrible mistake on my part.”

This past Tuesday,  according to TheGrio, conservative firebrand Rush Limbaugh disrespected Harris on his radio show by calling the 55-year-old senator a “hoe” and a “mattress.” He went on to mention Harris’ past relationship with former San Francisco Mayor Willie Brown and labeled that relationship as an “affair.”