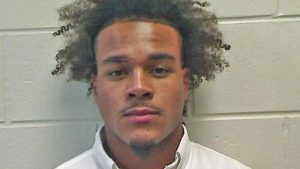 William Marcus Wilson, a 21-year-old black man from Sharpsburg, Georgia, who has been charged with felony murder and aggravated assault in the shooting death of Haley Hutcheson, a white teen from Bellville, has been denied bail, according to NewsOne. He was arrested in early June after fatally shooting at a “truckload of belligerent racists” who were attempting to steer him off the road, despite the state’s Stand Your Ground laws.

The incident took place on June 14. Hutcheson was inside the truck that was pursuing Wilson and his white girlfriend. The occupants in the vehicle were screaming racial slurs at the two of them. Wilson, who is legally allowed to carry the weapon he used to defend himself, should never have been charged, according to his attorneys.

Wilson’s attorneys say he should be held to the same legal standing as white defendants who utilize the state’s controversial Stand Your Ground laws.

At a preliminary hearing earlier this week, Bulloch County Superior Court Judge Michael Muldrew apparently feels that “Wilson’s anger appeared to have overtaken him when he had contact with the person in the truck,” which renders him “a significant threat to persons in the community.”

Muldrew ruled that prosecutors had sufficient evidence to seek an indictment from a grand jury according to Statesboro Herald. He reached that ruling after a detective laid out conflicting statements regarding what happened that day, which happened on a bypass around Statesboro in southeast Georgia.

The detective, Travis Kreun, said Wilson consented to a phone interview with police days after the shooting. He told the officers that there were white teenagers leaning from the truck’s passenger-side windows and yelling racial slurs at them. He also said that the truck’s driver was swerving back and forth in front of Wilson’s car, which was struck by an object thrown from the truck.

“He said, ‘All I can tell you is me and my girlfriend were really scared that night,’” Kreun testified. He said Wilson added: “With everything going on in this country, I’m not going to let me and my girl get run off the road.”

Kreun also testified that Wilson’s girlfriend told police that although she saw two of the white teens hanging out the truck’s windows, she didn’t hear any racial slurs.

The detective also stated that Wilson’s girlfriend told police: “It kind of looked like they were trying to run us off the road, but I don’t know.”

Overview of the EUR/USD pair. October 7. Is Trump really sick? Or is the White House hiding other facts about the US President’s

Biden’s plans may drive gold up in the coming years