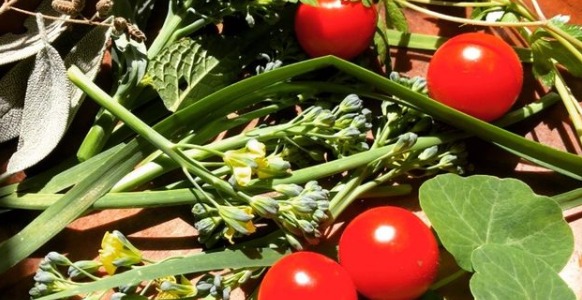 Learning about Crop Swap LA offers a crash course in urban farming, but with a twist. Founded by Jamiah Hargins, Crop Swap LA believes that 80% of our food sales should be derived within the zip codes where foods are grown, according to the social enterprise which grows foods in unused spaces, such as front yards. The Counter reported that Hargins founded Crop Swap LA in 2018 to redistribute excess homegrown fruits and vegetables to neighbors.

“The idea is to have homeowners “share” their yards with the Crop Swap LA team, which will plant an edible plot. The goal is to create a system that will have both ecological benefits and financial ones, with the resulting produce being sold primarily within lower-income communities and part of the profit going back to the landowners,” The Counter also said.

“Crop Swap LA will install gardens on a sliding scale, putting a price on them for those who can afford it while using grant funds or donations to build them for homeowners without the means to pay. When the crops are harvested, they’ll be sold primarily in low-income zip codes, including to local chefs and restaurants in those areas,” The Counter explained.

The interview also said that 10% will be donated back to the neighborhood where the produce was grown. An additional percentage will be sold in higher-income areas. However, a portion of the funds will be returned to the landowner. Hargins expected the amount to total about $5,000 annually, according to the interview which was conducted in 2020.

Producing quality food is also an important aspect of Crop Swap LA. According to the website, regenerative organic soil is life.

Crop Swap LA said that food should be grown in enriched and tested soil for perfect mineral and nutrient composition. It should also be free of pesticides or any GMO seed usage.

Fast Company explained also that Crop Swap LA uses your front lawn to grow vegetables for a produce-subscription program. Additionally, the microfarms, which are also known as community gardens, are installed and managed by Crop Swap LA. Neighbors pay for monthly subscriptions to the ultra-local food.  Also, homeowners get both a share of the produce and a cut of the proceeds, according to the interview.

“We maintain it, but they get part of the income every month,” Hargins also said to Fast Company.

The interview also stated that View Park, the neighborhood where the first microfarm was planted, is considered a food desert. Crop Swap LA also provides access to fresh vegetables when access may be limited.

“Through Crop Swap LA, residents can subscribe to a 3-pound mix of fresh, organic greens and vegetables for $36 a month, or $43 with delivery,” Fast Company said.

Our Team Member’s Journey Back to Health After COVID-19

Vanessa Bryant Pays Tribute to Daughter Gianna on Her Birthday With Launch of Clothing...