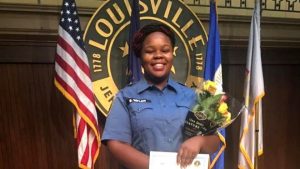 Six months after the night her life was taken, the Kentucky attorney general is preparing to present evidence following Breonna Taylor’s killing to a grand jury.

Two sources familiar with the situation told NBC News that Attorney General Daniel Cameron will present the case before a Louisville grand jury next week at an undisclosed location. Once the grand jury decides if the case will go forward, Cameron will make a public announcement to share his office’s investigative findings and the grand jury’s decision on possible indictments for the three officers who fired their weapons that night.

“When the investigation concludes and a decision has been made, we will provide an update about an announcement,” Cameron said in a statement. “The news will come from our office and not unnamed sources. Until that time, the investigation remains ongoing.”

Taylor and her boyfriend, Kenneth Walker, were asleep the night of March 13 when Louisville Metro Police barged into her home with a no-knock warrant in relation to a drug investigation. The noise woke Taylor, who thought someone was trying to break-in. Walker, who is a registered gun owner, fired a shot toward their bedroom door.

The police responded, firing a bevy of shots toward the couple and hitting Taylor five times. One of the three officers who fired shots at Taylor has been fired for displaying “an extreme indifference to the value of human life” when he “wantonly and blindly fired 10 rounds into the apartment of Breonna Taylor,” according to the officer’s termination letter, which was posted to the Louisville Metro Police Department’s Twitter account.

A grand jury of a dozen citizens is seated each month in Louisville and decides whether to bring charges on between 15 and 20 cases per day. However, Taylor’s case is expected to last several days as evidence is presented.

In order for any of the three officers to be indicted, at least nine jurors have to rule there is “sufficient” evidence to believe a crime was committed, according to NBC.

Sam Aguiar, a lawyer for the Taylor family, said the family would be disappointed if the only outcome was to charge the three officers who fired shots that night. Aguiar said the Taylor family still has unanswered questions about the search warrant the Louisville Metro Police used, the judge who signed off on it, and the legitimacy of the search warrant that led officers to Taylor’s home.

“If they emerge with indictments that are only in relation to the actual shooting, we would have plenty of questions regarding all of the criminal actions leading up to and after the shooting,” Aguiar told NBC Wednesday.

Aguiar also revealed last week that Louisville prosecutors offered Taylor’s ex-boyfriend, Jamarcus Glover, who is facing multiple drug-related charges, a plea deal if he were to say that she was a part of an organized crime syndicate. Glover declined the deal and pleaded not guilty to the charges.

How Benchmarking and Analytics Can Inform Fundraising Strategies

Motown Legend Stevie Wonder Plans To Expatriate to Ghana, Shares Why In Interview With Oprah Winfrey

North Carolinians come together to feed their communities

Bots and algorithms aren’t giving away jobs. The human brain and both its ten-fingered...

Pensole Lewis College Slated To Be The First HBCU To Reopen...