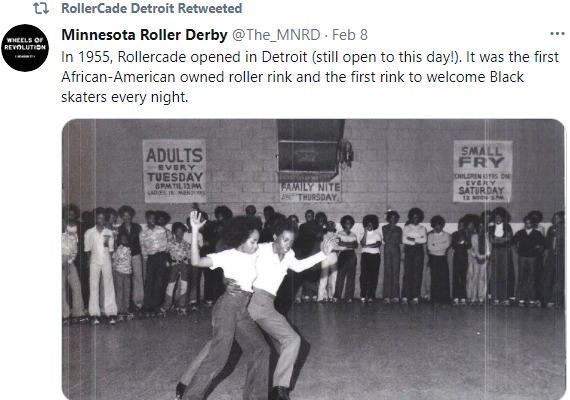 One of the oldest Black skating rinks in the country — RollerCade — is located in Detroit. RollerCade will operate in partnership with the outdoor roller rink, Rollout Detroit. VisitDetroit.com reported that Rollout Detroit is included in the city’s hub for outdoor recreation with Monroe Street Midway. It opened on May 28, 2021, and runs until the fall. The site also said that Bedrock, the largest real estate company in Detroit, leads project efforts to transform the future site of its Monroe Blocks development. RollerCade is a meaningful addition. The business’ history is deeply rooted in Detroit.

“RollerCade opened on Jan. 9, 1955, in the midst of the Civil Rights era, managing to keep the lights on during decades of population loss and disinvestment in Detroit. The rink is one of the oldest continually open, black-owned rinks in the country,” DetourDetroit said.

VisitDetroit.com also reported that roller skate sessions would be blocked off in two- or three-hour time slots and will cost $10 per session. Roller skates will be available to rent. Walk-ins are welcome, but sessions can also be booked ahead of time. The website also mentioned capacity limitations, social distancing and mask guidelines would align with the Michigan Department of Health & Human Services’ recommendations.

“Rollout Detroit will change what it means to roller skate in the City of Detroit,” Kyle Black said in a CBS Detroit article. “This truly unique and creative roller rink will thrill skaters of every skill level.”

The Michigan Chronicle reported that Black’s grandmother was the one who had the idea of opening Roller Cade in 1955 after her children were restricted to attending a skating rink during certain times in River Rouge during the 1950s because of the color of their skin. He remarked that he recalled skating before he knew how to walk. The skating enthusiast added that Detroit’s skate culture is like a “whole underground world.”

“Detroit has a very rich skating history, [which] as far as I know, goes back to ‘50s, ‘60s,” the man explained, adding that it had become more popular in ‘70s and ‘80s and is “really starting to build back up.”

Black added that it was necessary to reduce capacity at the roller rink due to the pandemic, but Roller Cade still sells out weekly. He told The Michigan Chronicle that skating is therapeutic. The small business owner also remarked that with the arrival of spring and things opening back up, passionate skaters in Detroit would enjoy it indoors and outdoors.

‘He’s Due Millions’: Bill Cosby Wants To Be Compensated For Time Served, Calls for Resignation of Judge And District Attorney

How to Invest in REITs

Guide to becoming a social media influencer — 4 Step for Beginners

New To Crypto? Prepare For The Next Bitcoin Boom With This...

10 MOST COMMON MISTAKES IN INFLUENCER MARKETING AND SOLUTIONS

Kick Your New Year Off Right By Learning These Five Coding...