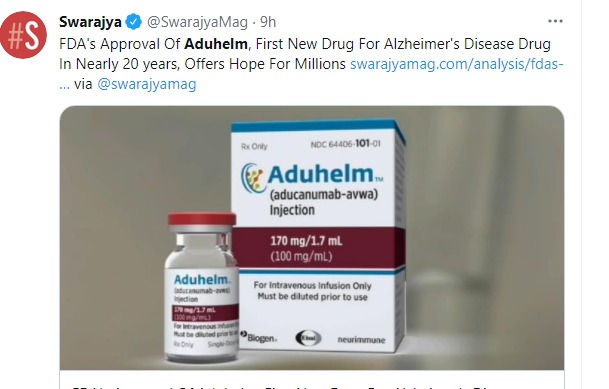 Alzheimer’s disease remains a major health concern in the Black community. The Food & Drug Administration’s recent approval of Biogen’s drug called Aduhelm (aducanumab)to fight the disease in patients diagnosed with the disease could bring hope to patients and families of color.

“This approval is significant in many ways. Aduhelm is the first novel therapy approved for Alzheimer’s disease since 2003. Perhaps more significantly, Aduhelm is the first treatment directed at the underlying pathophysiology of Alzheimer’s disease, the presence of amyloid beta plaques in the brain,” Dr. Patrizia Cavazzoni, director, FDA Center for Drug Evaluation and Research wrote on the agency’s website. “The clinical trials for Aduhelm were the first to show that a reduction in these plaques—a hallmark finding in the brain of patients with Alzheimer’s—is expected to lead to a reduction in the clinical decline of this devastating form of dementia.”

According to a special report, Race, Ethnicity and Alzheimer’s in America, presented by the Alzheimer’s Association, there is a higher percentage of elderly Black and Hispanic Americans who have Alzheimer’s, or who experience missed diagnosis, when compared to white elderly Americans.

The Centers for Disease Control and Prevention provided concrete numbers in 2018.

“Among people ages 65 and older, African Americans have the highest prevalence of Alzheimer’s disease and related dementias (13.8 percent), followed by Hispanics (12.2 percent), and non-Hispanic whites (10.3 percent),” the Centers for Disease Control and Prevention reported. Researchers estimate these numbers to increase, by 2060, 3.2 million Hispanics and 2.2 million African Americans with Alzheimer’s disease and related dementias as deaths from other chronic diseases declines and more people survive into older adulthood.

The urgency in improving Alzheimer’s treatment is building. Dr. Cavazzoni mentioned that the disease ranks sixth when it comes to causes of death in the U.S. She also pointed out that as Americans grow older, the number of Americans who live with it is expected to exceed the current 6 million mark. Aduhelm’s approval could offer a step in a positive direction, but it has garnered some debate.

“We know that the Peripheral and Central Nervous System Drugs Advisory Committee, which convened in November 2020 to review the clinical trial data and discuss the evidence supporting the Aduhelm application, did not agree that it was reasonable to consider the clinical benefit of the one successful trial as the primary evidence supporting approval,” Dr. Cavazzoni also said.

Despite differing perspectives, approval of the drug was granted under the “Accelerated Approval pathway.” The FDA’s press release explained that drug approval for a serious or life-threatening illness can be granted through the program, if it could provide meaningful therapeutic benefit over existing treatments, despite uncertainty about the drug’s clinical benefit.

U.S. Government Shows It Can Actually Agree On Something As Biden OK’s $1.2 Trillion Infrastructure Package

Dr. Mautra Staley Jones Was Selected As 2021 National Mother of the Year® By American Mothers, Inc.

Princess Anne’s bizarre breakfast habit revealed by royal chef – could you eat it this way?

Ciara and Russell Wilson Officially Open the Why Not You Academy

Meet the Sister Duo Who Built a $1 Million Haircare Line that’s Disrupting the...

Campaigns from the Middle East: When Insight, Culture, and Social Movements...

Save 29% on this ULTIMATE Nestle biscuit box only on Prime...

High School Graduate Raises Over $48K on GoFundMe to Attend His...

This $40 Social Media Masterclass Can Boost Your Engagement and Reach