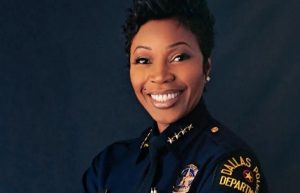 The first Black woman police chief of Dallas announced earlier this week that she intends to resign her position after receiving a lot of backlash for the way she and the Dallas Police Department have been handling the recent racial injustice protests in the city, according to NBCDFW.

Back in 2018, U. Reneé Hall was accused of mishandling the shooting of a Black man who was killed by a white police officer in his apartment. The police officer, Amber Guyger, claimed she thought there was a burglar in her apartment although Botham Jean lived a floor above her and she’d entered his apartment.

On Tuesday, City Manager T.C. Broadnax accepted Hall’s resignation letter. She originally stated she would resign effective Nov. 10, but Broadnax said he asked Hall to stay on until the end of 2020.

“This year has been tumultuous and uncertain. A few more months of her leadership are key for several projects and for a seamless transition within the police department,” Broadnax said in a statement. “In her three years of service, Chief Hall has provided consistent, passionate, resilient and robust leadership to our City. She has implemented a host of reforms that will assist our department as we move forward.”

“These past three years have been saturated with a series of unimaginable events that individually and collectively have never happened in the city of Dallas,” Hall wrote in her resignation letter. “I am proud that this department has not only coped with an unthinkable series of events, but we have also managed to implement critical reforms that were clearly needed for the Dallas Police Department to meet our 21st-century policing goals.”

Dallas Mayor Eric Johnson said he was not surprised by the chief’s decision to step down.

“I know that people who commit themselves to careers as police officers face immense challenges and must be willing to make tremendous sacrifices. We demand much from them and especially from our police leaders—and rightfully so because the stakes are incredibly high,” Johnson said in a statement. “On top of those demands, Chief Hall had the burden and the distinction of being the first woman—a woman of color, no less—to serve as the police chief in Dallas. That was not lost on me. I wish her the best in her career and in her life moving forward.”

The Anonymous Grand Juror In The Breonna Taylor Case Speaks Out

Analytics and trading signals for beginners. How to trade EUR/USD on September 22? Plan for opening and closing trades on

Stock indices of US and Asia rise whereas in Europe, pressure becomes stronger