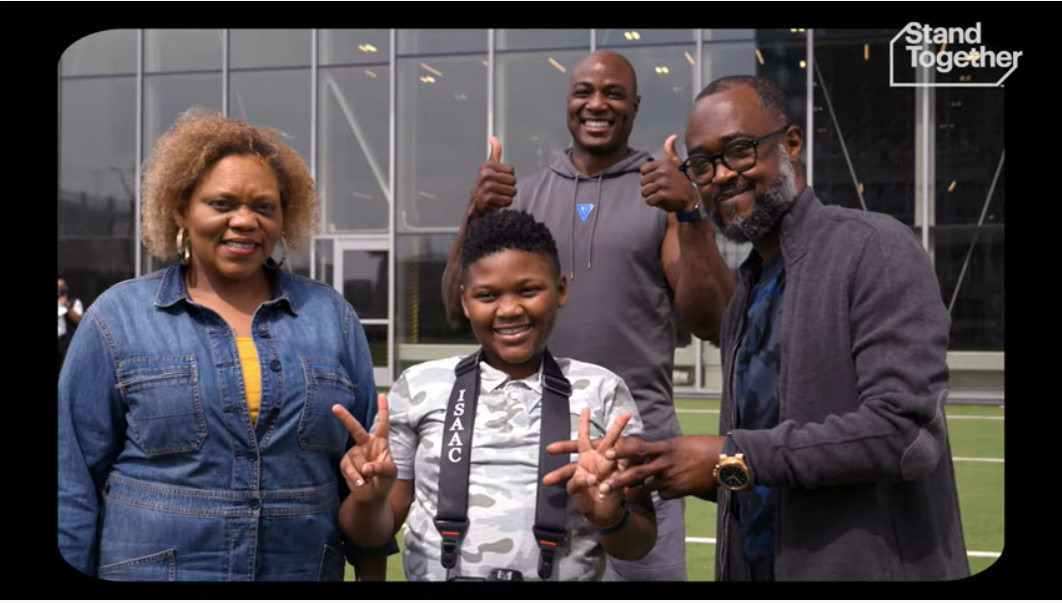 A 13-year-old boy named Isaac Edwards was gifted with a photography bootcamp and one-on-one photoshoot with Ware. The opportunity was sponsored by Stand Together, a philanthropic community of organizations that seek to remove societal barriers.

“When I grow up, I want to be a professional photographer,” Isaac said about his dream to shoot the NFL. “It’s my dream. I can’t explain it. It’s just my dream.”

Before the shoot, Isaac sharpened his skills during a seven-day online photography bootcamp. The camp was facilitated through Outschool, a non-profit organization on a mission to make online classes available to families of all income levels.

For several days, Isaac received lessons from professional sports photographer Jay Gorodetzer who is a teacher at Outschool. His assignments included teachings on lighting and composition, independent shooting, feedback, and critique.

“Isaac, I am so proud of you,” Gorodetzer told Isaac during one of their classes. “You can make meaningful pictures and you’re going to do that for your final mission.”

“Totally. I’m ready,” Isaac said. Little did he know NFL legend Ware would be there.

The day before Isaac’s final mission, he and his family had to move after their home flooded during the Uri winter storm.

A white box waited for Isaac, his mother and father on the day of the shoot. On a football field where the bow-tied gift was, Isaac’s mother, Stephanie Edwards, cried when he pulled a new camera out.

“Oh my God,” she cried while hugging Isaac. “After all we’ve been through, this is a blessing.”

Shortly after, Ware jogged onto the field and surprised the family, telling them that Isaac was in for a private shoot.

Isaac captured photos of Ware mid-air in his exercise gear.

“Hey, this kid’s really good,” Ware said after looking at the photos.

“The reason why you’re here is because we believe in you,” Ware told Isaac at the shoot. “We believe in what you want to do and don’t let anyone else tell you what you can’t do.”

When Virginia Mother of Five Fell On Hard Times, Her Community Stepped Up

Black Lives Matter Activist Pam Moses, Who Was Convicted Of Illegally Voting Despite Not Voting, Is Facing Four To Eight Years In Prison

The Revlon Blow Dry Brush the internet lost its mind over is so cheap...

Meet the 2-Year Old Math Genius Who Taught Himself How to...

Oregon to Pass The CROWN Act to Protect Black People From...