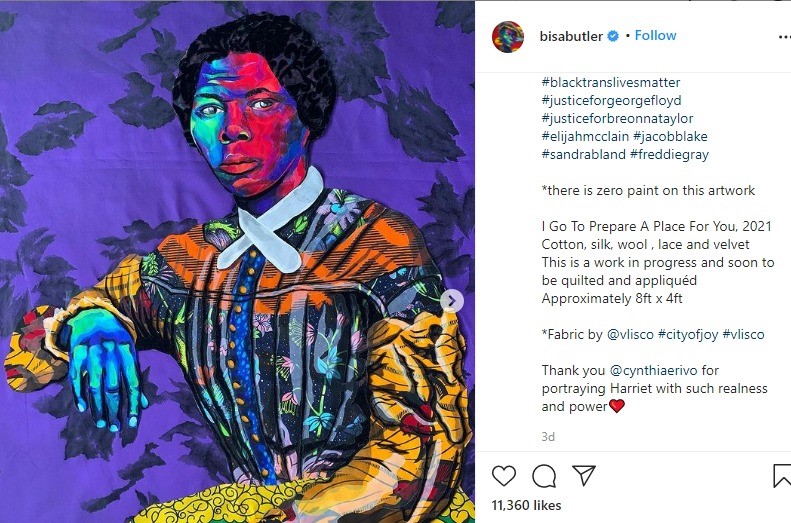 Art can teach, inform, inspire or soothe a troubled soul. It can elicit a gamut of emotions. A world with no art would be a world void of excitement, full of dullness. But for some art forms, such as quilting, an additional purpose was tied to a visual aspect. A Chicago Tribune article written years ago reminds us that the history of African American women in quilting is almost as old as the U.S. Therein, it was stated that quilts were made from scraps of fabric, and crafted for everyday use, during and after the Civil War.

“Black slave women were needed for spinning, weaving, sewing and quilting in wealthy households, and some became highly skilled. Before the abolition of slavery, members of the Underground Railroad used quilts to mark escape routes and houses of refuge for runaway slaves,” the article said.

This often forgotten element of the Black experience should not be overlooked, upon considering the modern story of a New Jersey-based fiber artist named Bisa Butler. On Butler’s website, she explains that she is telling the African American side of the story and history of men and women, although contributions and perspectives from people in this marginalized community have been ignored, unrecorded, or lost.

In her online space, Butler revealed that her grandmother and mother were not quilters, but they sewed garments nearly every day. Additionally, Butler recognizes the true genesis of ancestral quilting.

“Enslaved people were not given large pieces of fabric and had to make do with the scaps of cloth that were left after clothing wore out. From these scraps, the African American quilt aesthetic came into being. Some enslaved peoples were so talented that they were tasked with creating beautiful quilts that adorned their enslaver’s beds. My own pieces are reminiscent of this tradition, but I use African fabrics from my father’s homeland of Ghana, batiks from Nigeria, and prints from South Africa. My subjects are adorned with and made up of the cloth of our ancestor,”  Butler said on her website.

Butler also said that most figures she uses in her pieces look the viewers directly in their eyes. All of them are done to life scale. A goal is to invite the viewer to engage in a dialogue.

Artnet interviewed  Butler about her intricate quilts. In the interview, it was stated that her portrait quilts which are made by the 47-year-old artist are often based on black-and-white photographs. Black subjects included people who are famous, anonymous, or familial. Further, Butler, who has been making quilts since the mid-’90s, has reached milestones such as having an exhibition of her portraits opened at New York’s Katonah Museum in late 2020. Artnet also mentioned that Butler’s most prominent showing is currently viewable at the Art Institute of Chicago. It features 20 of her fabric portraits. Her portraits have appeared on books and magazines. Butler is currently represented by New York’s Claire Oliver Gallery. It was also mentioned in the Artnet interview that she started working on images of children, especially when she was  ready to leave the teaching field and felt sad about it.

On Butler’s Facebook page, a previous announcement pointed out how far-reaching her work has been.

“My quilted portrait of Wangari Maathai Environmental activist, women’s rights activist and the first African woman to win the Nobel Peace Prize on the cover of TIME Magazine’s special double issue 110 women of the year!” Butler posted with the referenced image.

Today, Butler can also be found on Instagram, fusing quilting with social justice conversation, while engaging with her followers.

“Another week of the Derek Chauvin murder trial and I am watching, hoping and praying that he gets convicted for the murder of George Floyd. We are still in the same fight that Harriet Tubman was in—the fight for Black people to be free and to be treated equally under the law, “ Butler said.

Please visit here to learn more about Butler’s exhibition at The Art Institute of Chicago.

EUR/USD and GBP/USD: The dollar gained strength amid record growth in the US economy. UK to lift nearly all COVID-19 restrictions

What will finally return EUR/USD to the “bearish” trend?

Forecast and trading signals for EUR/USD on January 7. COT report. Analysis of Wednesday....

The NFL Returns as Sponsor For the 2021 HBCU Battle of...

Coronation Street star Brooke Vincent has given birth to her second...

EUR/USD Trading Plan for 10 May