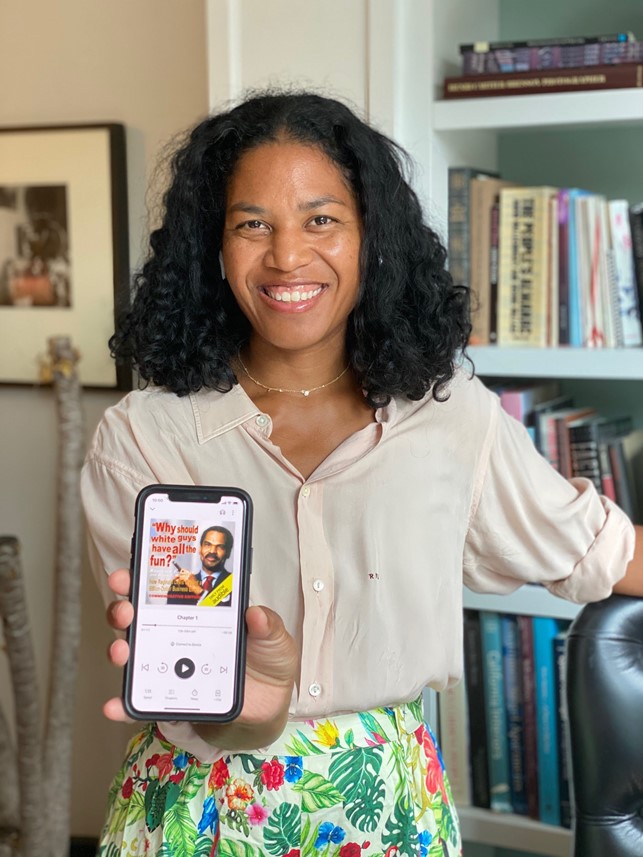 Why Should White Guys Have All the Fun? is celebrating its 25th anniversary. The book is about Reginald F. Lewis, the legendary entrepreneur who rocked Wall Street when his firm, TLC Group, acquired Beatrice International Foods for $985 million. The purchase in 1987 helped Lewis build the first Black-owned business to exceed the billion-dollar revenue mark. At the time it was the was the largest-ever offshore leveraged buyout. It was gigantic as TLC Beatrice International Holdings Inc. became the nation’s largest snack food, beverage, and grocery store conglomerate with a global presence.

And now, an audio version of the classic book was just released. Written by Lewis and co-author Blair S. Wall, the book was a New York Times best seller. The extraordinary exploits on the life and times of the astute, courageous, and bodacious Lewis still serve today as a source of inspiration to generations of Black entrepreneurs, including those in finance, technology, entertainment, and other fields.

Before his death in 1993, Lewis helped Black Americans gain access to financing for Blacks on Wall Street. His landmark endeavors encouraged Blacks to overcome barriers like race to become business owners, corporate executives, and major growth contributors to America’s economy. Lewis’ accomplishments remain momentous though they occurred over a quarter century ago. They shine like a beacon for African Americans to keep striving for, and potentially exceed, his success in their own business pursuits. The trailblazing work by Lewis is perhaps even more amazing in that it shows how a Black man pulled off acquiring a major international company with 64 companies in 31 countries. The name of Lewis became a sign of hope. That was especially true in the Black community as many African Americans were compelled to believe that if Lewis could score such a feat, then others could possibly play in the game as well.

“Reggie was not afraid of going beyond what Black business was, which was privately owned companies run by family members to be passed on to family members,” Johnson told Black Enterprise eight years ago. “He got access to public capital, which gives you leverage in deal making.” Johnson is founder and chairman of The RLJ Cos., a portfolio of companies with holdings in many industries.

Also a philanthropist, Lewis donated millions of dollars to empower and help others. The Reginald F. Lewis International Law Center was the first building at Harvard University named after an African American. The Reginald F. Lewis Foundation, whose chairman is Loida Lewis, Reginald’s wife, is among the largest African American private foundations in the world. As of December 2019, the foundation had given $30 million in grants since starting, according to its website.

Black Enterprise connected with Black entrepreneurs by email to reflect on this: How did Lewis inspire them in business and how can future generations build on his legacy?

IMB Partners CEO Tarrus Richardson recalls that in July 1987, there was an article on “Mr. Lewis buying McCall Patterns for $27 million and selling it for $90 million. He had invested only $1 million and made $63 million. I was 17 years old. After reading the article I looked at my mom and said, ‘now that looks like a good job’ and from that time on I committed to getting a job in the leveraged buyout business.”

Richardson added, “You can’t be what you can’t see. Once I had the visual of a Black man making that kind of money buying and selling companies, it made it easier for me to believe I too could do it.”

Today, Richardson is founder and CEO of IMB Partners. The Bethesda, Maryland-based firm is a 100% Black private equity holding company (similar to TLC Beatrice) that makes control acquisitions and partners with management teams to grow lower middle-market companies serving government agencies and electric and gas utilities. IMB Partners has revenue of over $500 million, five portfolio companies, and more than 300 employees. It ranked No. 42 on BLACK ENTERPRISE’S Top 100 list, an annual ranking of the nation’s top Black-owned businesses.

When he started imbpartners.com in 2010, Richardson says, Loida was one of his earliest investors and has invested in all of IMB’s deals. Richardson says while his company has not made a 90-to-1 return, the company is making 5-to-1 returns on its investments and its goal is to get to over $1 billion in revenue in the next five years.

Outside of business, Richardson says he helped Christina Lewis, Reginald’s daughter, found All Star Code as its founding board chair. He reports he was the lead funder for the 2018 PBS documentary on Reginald Lewis that was a dream of Loida and the family. “I am incredibly grateful for the inspiration and role modeling both in business and in life Mr. Lewis and his family have played in my life since I was a teenager and continues to play in so many others.”

Lewis Leaves Us A Blueprint

For serial entrepreneur Paul Brunson, Why Should White Guys Hall All the Fun? was the first book that he read cover to cover; he was 18 years old at the time.

“My life was completely heading in the wrong direction. It was prison, death, or out on the streets. The book really spoke to me because it was the first time that I felt someone was speaking to me. It gave me inspiration and instruction.”

More importantly, Brunson was inspired because someone who looked like him was winning and doing it not on a basketball court or a football field. He loved the step by-step instruction the book offered. For example, Brunson spoke of how Lewis had a specific schedule or gave himself mantras, including on such matters as to become a great lawyer you have to work hard. “That structure was very important because we can see that structure led to his success,” Brunson says.

Nowadays, Brunson hosts the Better With Paul podcast. He’s also a TV host and a business columnist at USA Today. The previous host of Black Enterprise‘s TV show, Our World, Brunson says the book is one of the first books that “moved a lot of us to the mindset we can actually do this, meaning that we can actually succeed as a professional in business.”

Brunson says another pillar is the fact that we have to constantly re-evaluate ourselves and ask ourselves what we can do better, even in the face of adversity like racism.

For example, Brunson says there was at least one acquisition, but probably more than one, that Lewis attempted to make in his early 40s where he was unsuccessful—namely because of racist tactics on the part of the seller. Still, he says, Lewis re-evaluated what he could do better in the situation though he obviously could not change the color of his skin. “That self-reflection and introspection is very important for us, particularly for Black professionals as we move forward.”

Further, Brunson says, one of the biggest things that has gotten lost in the Black community is that real wealth building comes as the result of acquiring businesses, not just starting businesses.

He says a philosophy for Lewis was: how to acquire a business, add more value to that business, and then extract value from that. Brunson says acquisitions are what Black entrepreneurs should be focusing on. “We would benefit to a much higher degree if we would acquire more businesses.”

Lewis’s Mark As A Father

Following in her father’s entrepreneurial footsteps, Christina Lewis started All Star Code. The nonprofit creates economic opportunity for young men of color by helping them develop tools needed to succeed in a technological world. But in developing a generation of young Black high school students and future tech entrepreneurs, Christina says what she is doing is helping develop Reginald Lewises in tech and trying to develop others to follow in her father’s footsteps.

Christina, who also is treasurer of the Reginald F. Lewis Foundation, says, “My Dad inspired me in life to be hard-working, to value strength of character, and to be generous. He and my mother taught me to be a caring parent. Future generations can build on his legacy by staying humble, achieving success, but also enjoying their lives. My father never had a chance to retire. I hope that those who follow in his footsteps of hard work know that Black joy is a precious thing.”

Using Lewis’s Words As A Guide

Another Black entrepreneur Lewis greatly influenced was Troy Carter. He’s the founder and CEO of Q&A, a music and technology firm. He was previously founder and CEO of Atom Factory and co-founder/managing partner of Cross Culture Ventures. He most recently was global head of Creator Services at Spotify.

Carter recalls coming across Lewis’s biography when he was 22-years-old. “I just became a father and was struggling with what to do with my life. Reginald’s life story gave me the inspiration I needed and gave me the confidence that a young Black kid had the ability to play in the big leagues.” Over the years, Carter says he has re-read the book dozens of times as he ran into roadblocks. “‘What would Reggie do?’ became my internal mantra when I needed a battery in my back.”

A couple of decades later, after building a successful career in music and technology, Carter says he was speaking at an MIT event. He says a woman walked over and told him her idea of building an organization to teach Black teenagers software programming. The woman was Christina Lewis. Carter says he became a founding member of her board and part of the Lewis family.

“More importantly, I became a true part of Reginald’s legacy,” Carter says. “If I can impact one kid the way Reginald’s life has impacted mine, it would serve as a small forwarding of the blessing.”

Kamau Murray Talks Producing The Chicago Fall Tennis Classic at His $16.9M Facility on The South Side

Morehouse To Reopen With 1,200 Students and Hybrid Academic Program for Spring Semester

The Galápagos Islands: East vs. west

Why Virtual Advisors are The New Normal

Idahoan Foods Takes Aim at Consumers’ Plates with the Mashed in...

Black-Owned Restaurants Hope To Get Their Slice of Proposed $60B in...